Comments (0)
Add to wishlistDelete from wishlist
Cite this document
Summary
I would first ensure that the person who is the donor has been proven innocent. The person must have cleared himself or herself from the authority, but if not, I would not take the…
Download full paperFile format: .doc, available for editing
HIDE THIS PAPERGRAB THE BEST PAPER96% of users find it useful 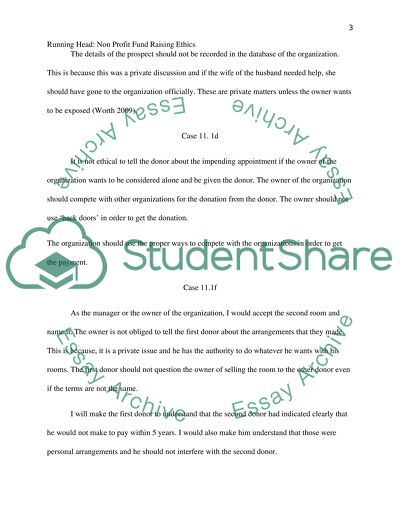 Non Profit Fund Raising Ethics Case 11. 1a If was the manager or the owner of the nonprofit organization, I would accept the donation. I would first ensure that the person who is the donor has been proven innocent. The person must have cleared himself or herself from the authority, but if not, I would not take the donation. This is because, even if the donor had been convicted of a white collar crime, it does not mean that the origin of the money that he or she is offering for the donation comes from those illegal activities. The management of nonprofit organization should not question the origin of the money that they are given by the donors. This can only be done under special circumstances.
Even if the organizations have to apply the code of conduct in their activities, they do not have a right to question the origin of the money. Therefore, the organization should accept the money. But if the money that he or she is giving to the organization has been established that he acquired illegally, the organization should not accept the money. It makes no difference even if the person has served the jail sentence. Though this would be a good prove that the person is free to use his money.
Case 11. 1c
The information about the prospect’s husband illness should not be communicated to the volunteer. This is a personal arrangement and the prospect may be does not want the information to be distributed publicly. The fund raiser should first confirm from the prospect whether she wants the information known to the volunteer and the donor. Even if she is being helped, her right of privacy should not be violated. The fund raiser should act according to the prospect.
The details of the prospect should not be recorded in the database of the organization. This is because this was a private discussion and if the wife of the husband needed help, she should have gone to the organization officially. These are private matters unless the owner wants to be exposed (Worth 2009).
Case 11. 1d
It is not ethical to tell the donor about the impending appointment if the owner of the organization wants to be considered alone and be given the donor. The owner of the organization should compete with other organizations for the donation from the donor. The owner should not use ‘back doors’ in order to get the donation.
The organization should use the proper ways to compete with the organizations in order to get the payment.
Case 11.1f
As the manager or the owner of the organization, I would accept the second room and name it. The owner is not obliged to tell the first donor about the arrangements that they made. This is because, it is a private issue and he has the authority to do whatever he wants with his rooms. The first donor should not question the owner of selling the room to the other donor even if the terms are not the same.
I will make the first donor to understand that the second donor had indicated clearly that he would not make to pay within 5 years. I would also make him understand that those were personal arrangements and he should not interfere with the second donor.
References
Worth. M. J. (2009). Nonprofit Management: Principles and practice. Thousand Oaks, CA: Sage. Read More
Share:
Tags
Cite this document
(“Study 4 - Nonprofit Fundraising Ethics Coursework”, n.d.)
Retrieved from https://studentshare.org/miscellaneous/1595570-study-4-nonprofit-fundraising-ethics

...-y.org.uk/) who raise awareness of the disease, support the families who have gone through deaths of loves ones, and are involved in fundraising for the cause to equip local communities, colleges, schools with automated external defibrillators (Patient UK, 2011). Awareness of Sudden Adult Death Syndrome is also raised through booklets and events from British Heart Foundation, which provides information on cardiac illnesses including SADS. SADS UK – The Ashley Jolly Sad Trust According to the official website, “The Ashley Jolly Sad Trust (SADS UK) is a voluntary organization that exists to raise awareness about little known heart conditions in young people and provides information and support to families who have...
4 Pages(1000 words)Coursework

...or otherwise liable entity names have been disclosed in the document or prospectus. Liabilities of the directors might also be deemed as secondary if a particular person or group is found guilty for the contravention. It is also worth suggesting to The Green Coffee Company Ltd that compliance with Sections 710 to 715 is mandatory when disclosing the document or prospectus for approval from the ASIC. Additionally, the company must restrain from opting for an advertisement or publication which refers to the fundraising offer irrespective of being direct or indirect which can be made only after obtaining an authorisation in compliance with subsections (4), (5), (6) or (7) of section 734 of the Act...
7 Pages(1750 words)Essay

...Ramadan fundraising In this activity I sold two booklets of tickets to family and friends in order to raise fund which will be used to buy food for the poor who are having their Ramadan. 2. At the start of the fund raising activity, I hoped to collect as much money as I can in order to help more people this year. 3. Having sold the two booklets, I feel very much fulfilled and satisfied with the results of my effort. Seeing the smile in the people who were given food really inspired me. 4. I have learned that each success requires perseverance. Through this activity, I have developed greater patience, self confidence, and communicate my ardent desire to help to those who bought the tickets. 5. The...
4 Pages(1000 words)Essay

...Nonprofit Discussion Questions It is generally said that the very basis principle for the success of any nonprofit is its leadership hence it is veryimportant that the leadership we have must be really very capable and efficient. We also see that the we can’t entirely depend on the leadership for the success there are many other factors contributing as well for as we learned before a good leadership may also get a bit weak at a point when they the senior people there do not let others do the work wanting their hold and power to stay and be visible. The Carvers model incorporate ten guiding principles which call for avoiding concentration of powers in the hands certain board members and call it be teamwork...
2 Pages(500 words)Coursework

...for the board as well in succession planning since they need to know the reactions of the stakeholders. (Carey, Ogden, & Roland, 2000) 2. How do the roles of governing board and CEO interact during the stages of a nonprofit life cycle? Who should take the lead if renewal is necessary? A non-profit organization is essentially an organization which doesn’t believe in profits or dividends and even if it makes surplus money, it inputs it in moving towards its goals and achieving its aims. A membership organization elects a board and meetings are held where as a board only organization has a board which has elected itself and this increases the importance of the board in the organization. However, it is still and...
6 Pages(1500 words)Coursework

..., the company must restrain from opting for an advertisement or publication which refers to the fundraising offer irrespective of being direct or indirect which can be made only after obtaining an authorisation in compliance with subsections (4), (5), (6) or (7) of section 734 of the Act (“Corporations Act 2001” 2012). Question 2: Suggestions or Remedies Available to (a) Green Coffee Company Ltd, (b) The Directors of Green Coffee Company Ltd, (c) Leaping Lizard Coffee Pty Ltd Issue/ Area of Law As the case scenario presents an apparent indication of misleading facts disclosed through the lodged prospectus to ASIC along with the occurrence of uncertain risks which have led to a fall in the disclosed...
7 Pages(1750 words)Essay

...(A+) should be held responsible for carrying out lousy work, furthermore, the hospital management, in general, should be held responsible to curb future lousiness (Welcome to Advances in Medical Ethics). On the other hand, the ROI (Release of Information) coordinator could have ordered a medical officer to carry out a re-do of Martha’s blood type to obtain a valid blood type and request for a correct re-entry of her medical record rather than maintaining that the legal document could not be changed. The Health Information Management director (HIM) could have been following protocol as stipulated by management yet I support a professional approach to taking the tests again and request for a re-entry of her medical data...
1 Pages(250 words)Case Study
sponsored ads
Save Your Time for More Important Things
Let us write or edit the coursework on your topic "Study 4 - Nonprofit Fundraising Ethics" with a personal 20% discount.
GRAB THE BEST PAPER

Let us find you another Coursework on topic Study 4 - Nonprofit Fundraising Ethics for FREE!