Comments (0)
Add to wishlistDelete from wishlist
Cite this document
Summary
We are advised to use other peoples words wisely, and to put them in quotation marks while citing there source to avoid plagiarism. Deliberate plagiarism has been described as…
Download full paperFile format: .doc, available for editing
HIDE THIS PAPERGRAB THE BEST PAPER92.1% of users find it useful 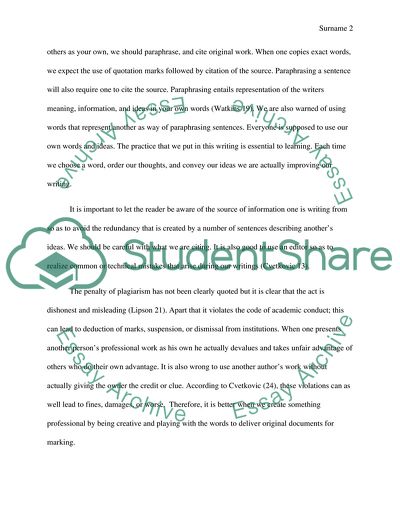 Plagiarism The use of another person’s work without giving credit is referred to as plagiarism (Watkins 2). We are advised to use other peoples words wisely, and to put them in quotation marks while citing there source to avoid plagiarism. Deliberate plagiarism has been described as cheating. The best thing to do is, therefore, to provide citations when using others thoughts, even if one has paraphrased the ideas. We are also made aware that some plagiarisms are not intentional.
It is necessary for writers to realize the importance of acknowledging the source which had the original details. Most papers are said to lose credibility when they fail to cite the source of information (Roberts 9). No matter how good one has had the understanding of the concept he is putting down. The originality of the conclusion and the conceptualization issues, it all comes down useless if plagiarism is detected in his work. We should ensure appropriate citation for our work.
We should ensure academic honesty in whatever we do. Plagiarism makes one not learn how to write his own thoughts in his own words. We also fail to acquire the individual needs and skills. So as to avoid this kind of dishonesty and/or misleading by misrepresenting the work of others as your own, we should paraphrase, and cite original work. When one copies exact words, we expect the use of quotation marks followed by citation of the source. Paraphrasing a sentence will also require one to cite the source. Paraphrasing entails representation of the writers meaning, information, and ideas in your own words (Watkins 19). We are also warned of using words that represent another as way of paraphrasing sentences. Everyone is supposed to use our own words and ideas. The practice that we put in this writing is essential to learning. Each time we choose a word, order our thoughts, and convey our ideas we are actually improving our writing.
It is important to let the reader be aware of the source of information one is writing from so as to avoid the redundancy that is created by a number of sentences describing another’s ideas. We should be careful with what we are citing. It is also good to use an editor so as to realize common or technical mistakes that arise during our writings (Cvetkovic 13).
The penalty of plagiarism has not been clearly quoted but it is clear that the act is dishonest and misleading (Lipson 21). Apart that it violates the code of academic conduct; this can lead to deduction of marks, suspension, or dismissal from institutions. When one presents another person’s professional work as his own he actually devalues and takes unfair advantage of others who do their own advantage. It is also wrong to use another author’s work without actually giving the owner the credit or clue. According to Cvetkovic (24), these violations can as well lead to fines, damages, or worse. Therefore, it is better when we create something professional by being creative and playing with the words to deliver original documents for marking.

...?[Your full full July 23, Plagiarism Plagiarism refers to the act of copying or using the ideasof others without referring to the original source. For example, if a person writes a report or an essay and copies some relevant statements from other sources, such as, internet articles, encyclopedias, books, magazines, government documents, and publications, without mentioning the sources of those statements both within the essay and in the page of references, it means that the person has done plagiarism in his/her paper. Plagiarism is considered an academic crime in academic settings. There is no school, college, or university anywhere in the world that does not discourage...
3 Pages(750 words)Essay

...?Plagiarism occurs when a purports an idea that belongs to another as his original idea failing to acknowledge the source of information. Plagiarism is intellectual dishonest or theft since one implies to own ideas that are not his own, and consequently commits a form of dishonesty. Plagiarism can take many forms such as direct copy pasting of other students work or sources, and has bad repercussions to students and writers; however, there are strategies to avoid plagiarism that include paraphrasing, use of quotes and employing specific referencing styles such as MLA. Plagiarism usually applies to specific texts that are print published, texts that are...
4 Pages(1000 words)Essay

...WRITING MENT The purpose of submitting this written ment is to clarify and explain myself to my teacher and the misconduct officer for the prima facie case of suspected plagiarism regarding my work on individual report on “Samsung Strategic Plan.” In the following passages I have given the accounts in order to justify myself how this was not intentionally done. I know that plagiarism is a violation of the code of conduct and is a malpractice. I have a clear understanding that I am prohibited to take another writer’s work and ideas and claim them as my own. I acknowledge the fact that I have copied word-for-word but most of the text was not paraphrased or copied at all. In no way did I mean any...
2 Pages(500 words)Essay

... Plagiarism and Strategy for Prevention The advancement of technology has ensured that a whole lot of textual material is now available onlinewithin a few clicks of the mouse. This easy access has tremendous advantages because students and researchers across the globe can take advantage of referring to materials, which were earlier available only in certain libraries. On the other side, this has also made plagiarism easier than ever before (Underwood and Szabo, 2003). The Council of Writing Program’s Administrators (WPA) mentions that plagiarism happens when a writer deliberately uses someone else’s language, ideas, or other original (not common-knowledge) material without acknowledg­ing its source (Council of Writing Program... ...
5 Pages(1250 words)Essay

...Plagiarism Every individual is capable of formulating and establishing his or her own opinions or ideas. However, due to the excessive access to information, many are using this privilege to copy the works of others without giving full credit to the sources. This practice has been well-known as plagiarism. This can be universally defined as the act of copying or imitating the works, words, ideas, thought, or feelings conveyed by an author in a particular text without acknowledging the original text and the author. In many cases, the doers of plagiarism are students who do their assignments haphazardly, who do not trust their own knowledge and ability on the given task, and others who aim...
2 Pages(500 words)Essay

...Recommendation for Ingrid’s penalty in committing plagiarism There is no doubt that plagiarism goes against school policy of upholding academic integrity. The accused, Ingrid, admitted to the plagiarism charges lodged against her by her instructor. In her defense, she cited that such commission of plagiarism was unintentional because she was extremely busy that she neglected to document her source as carefully as should have. The punishment for plagiarism under the school’s policy for a senior is withholding the bachelor’s degree for one year and a permanent notation on the student’s transcript that he or she committed plagiarism.  ...
2 Pages(500 words)Essay

...Plagiarism in the criminal justice field How could this be problematic in your major field of study? Plagiarism is very real in the professional work place (Ferree & Pfeifer, 2013). In the past few years, there have been highly publicized cases of professionals losing their jobs because of passing off other people’s work as their own. In the criminal justice field, plagiarism is not only unethical but also illegal and may lead to criminal charges (Ferree & Pfeifer, 2013). Explain the difficulties of someone presenting another individual’s hard work as their own if this occurred on the job or where you intend to work after obtaining this degree It is very difficult for someone to present...
1 Pages(250 words)Assignment

..._______________________________ Print out and study the four examples below. Each example first presents the original work, followed by text that a student wrote and handed in for an essay assignment. Decide if the student’s work constitutes plagiarism or not. If the student’s work is plagiarism, identify it as one of the 5 types described on the handout, “Plagiarism: What It Is and How to Avoid It”. Note, however, that the student’s work may be acceptable. EXAMPLE 1: Original Writing from Two Sources Source 1: "Despite the strong public opposition, the Reagan administration continued to install so many North American men, supplies, and facilities in Honduras that one expert called it...
2 Pages(500 words)Essay

2 Pages(500 words)Essay
sponsored ads
Save Your Time for More Important Things
Let us write or edit the essay on your topic "Plagiarism" with a personal 20% discount.
GRAB THE BEST PAPER

Let us find you another Essay on topic Plagiarism for FREE!