Comments (0)
Add to wishlistDelete from wishlist
Cite this document
Summary
The extent of risks is uncertain but appears to be minimal in probability of occurrence as compared to other risks that occur in our daily…
Download full paperFile format: .doc, available for editing
HIDE THIS PAPERGRAB THE BEST PAPER94.9% of users find it useful 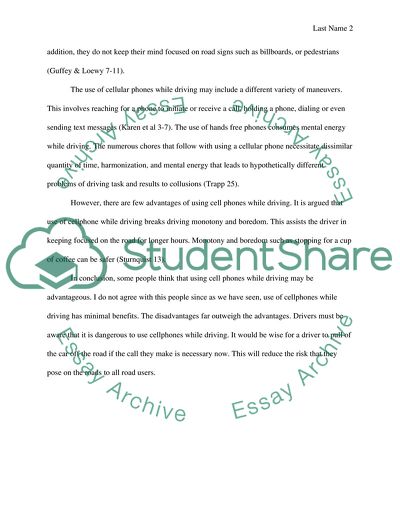 Using Cellphones While Driving The proof by scientific experts is that use of cell phones while driving poses great risks to the driver, passengers, as well as road users. The extent of risks is uncertain but appears to be minimal in probability of occurrence as compared to other risks that occur in our daily lives. However, there are few advantages associated with using cellular phones while driving. This article assesses the risks versus benefits associated with cellular phones usage while driving and supports that use of cellphones while driving is indeed dangerous.
The use of cellular phones while driving should be a concern to everyone involved. One of the main disadvantages is that they create a great risk of motor vehicle collision. This happens in that the driver losses concentration on the road and focuses attention on listening to the phone call. Vehicle accidents cause minor, serious, crippling, and even fatal accidents. They result in property damage, which are expensive to repair. Moreover, health care costs after the accidents can be a huge expense to the victim (McHale 17-24).
In addition, people who drive while using cell phones drive erratically. This puts other people’s lives at a great risk. It happens in that the driver may fail, at the required time, to use proper signals, miss road signs, change lanes abruptly and they usually respond slowly to hazards. The pattern from such erratic drivers can be dangerous to road users. It includes other drivers, pedestrians and other equipment on the roadside (Trapp 14-22).
Furthermore, motorist involved in a stressful or emotional cell phone conversation may mostly show aggressive behavior as they drive. An example is road rage. Moreover, drivers who chat on cell phones are slow to brake, and took longer to increase the pace after they braked. In addition, they do not keep their mind focused on road signs such as billboards, or pedestrians (Guffey & Loewy 7-11).
The use of cellular phones while driving may include a different variety of maneuvers. This involves reaching for a phone to initiate or receive a call, holding a phone, dialing or even sending text messages (Karen et al 3-7). The use of hands free phones consumes mental energy while driving. The numerous chores that follow with using a cellular phone necessitate dissimilar quantity of time, harmonization, and mental energy that leads to hypothetically different problems of driving task and results to collusions (Trapp 25).
However, there are few advantages of using cell phones while driving. It is argued that use of cellphone while driving breaks driving monotony and boredom. This assists the driver in keeping focused on the road for longer hours. Monotony and boredom such as stopping for a cup of coffee can be safer (Sturnquist 13).
In conclusion, some people think that using cell phones while driving may be advantageous. I do not agree with this people since as we have seen, use of cellphones while driving has minimal benefits. The disadvantages far outweigh the advantages. Drivers must be aware that it is dangerous to use cellphones while driving. It would be wise for a driver to pull of the car off the road if the call they make is necessary now. This will reduce the risk that they pose on the roads to all road users.
Works Cited
Guffey, Ellen and Loewy, Dana. “Essentials of Business Communication.” London: Cengage Learning. 2009. Print.
Karen, Lissy et al. “Cellular Phone Use While Driving: Risks and Benefits.” Boston: Harvard Center for Risk Analysis. 2011.Print.
McHale, Kolby. “Why Cell Phones and Driving Dont and the Laws on Using Cell Phones While Driving Including Texting.” New York: BiblioBazaar. 2011. Print.
Sturnquist, Daniel. “Mobile phones and driving.” New York: Nova Publishers. 2006. Print.
Trapp, Robert. (2009). The Debatabase Book: A Must-Have Guide for Successful Debate. New York: IDEA. Read More
Share:
Tags
Cite this document
(“Using cellphones while driving Essay Example | Topics and Well Written Essays - 500 words”, n.d.)
Retrieved from https://studentshare.org/miscellaneous/1592907-using-cellphones-while-driving

CHECK THESE SAMPLES OF Using cellphones while driving

...? Problem ment The use of cell phones while driving continues to be debated among public officials, those who are trying to maintain safety while driving and the general public. According to a new survey (Britt, 2005), those between the age of 20-30 use cell phones continuously while driving to a specific place. It is noted that the cell phone disturbance while driving has led to 2600 deaths and 330,000 injuries. The danger of cell phones is also reported to change response times, leading to more accents and the inability for those on the road to remain safe. According to...
9 Pages(2250 words)Term Paper

...?Using Cell Phones While Driving Mobile phones have been with us for quite awhile, however it wasn’t until the 1990s that third generation cell phones with roaming networks made it possible for us to talk and drive. It was at about this same time that motor vehicle accidents began to increase at an alarming rate. More than 200 deaths a year were attributed to cell phones, with at least half a million annually attributable accidents with injuries. While cell phone companies dispute the claim that cell phones are not the cause of accidents, people who don’t pay attention to road conditions while they are...
5 Pages(1250 words)Essay

...?Jennifer Harrison Amrine English 50 31 May Texting While Driving It has been proved umpteen times that texting while driving can leadto disasters. Considering the seriousness of the situation, many administrations have already banned using mobile while driving. Already, 30 states in the US have legislation prohibiting texting while driving in place. However, evidence suggests that the law is not strong enough to stop people from doing this. According to reports (cited in Buzzle.com), a total of 16,000 people died in accidents caused by drivers sending text messages while driving between 2001 and 2007. Despite the best efforts from the part of governments and law enforcement agencies, there was a 28 percent increase in the number... of...
6 Pages(1500 words)Research Paper

...-dire consequences of texting while driving (AAA). They registered a considerable level of success since after the ban was implemented in California, the percentage of drivers texting went down by approximately 70 percent (AAA). In June 2012 a Massachusetts teen was sentenced to serve one year in jail for involvement in deadly car while writing a text, under the new state laws that criminalize injuring someone while texting and driving (Conan). In ten American States, talking on hand held devices are not allowed while 32 ban cellphone usage by novice drivers, while 39 have banned texting and...
4 Pages(1000 words)Research Paper

...Unit The Dangers of Texting While Driving Texting while driving de s the action of reading, sending or composingshort text messages or e-mail or making similar use of the World Wide Web on a mobile device, while at the same time driving. Texting while driving has been viewed as one of the major causes of distracted driving, which occurs in driving. Distracted driving denotes any activities, which could divert a person’s attention away from the driving task. Such distractions endanger the safety of bystanders, passengers...
3 Pages(750 words)Essay

..." (Kennedy, 1999). Rising crime has emphasized the control role of the criminal law among other factors, have contributed to a heavier workload for the civil law. Although, "One common complaint about racial profiling is that using race (say, blackness) as one of several factors in selecting targets of surveillance is fundamentally and necessarily racist" (Kennedy, 1999). The problem of "Driving While Black" policies is evident because more and more black people are pulled over without cause. For instance, "During the trial it emerged that on a 26-mile long stretch on the southern part of the New Jersey Turnpike minorities accounted for 46 percent of the drivers stopped, even though they...
5 Pages(1250 words)Essay

...Using Cell Phones are Dangerous while Driving Introduction Technology has always provided us with devices that have made our day to day tasks simpler and effective. There is always a clandestine competition between two technological aspects namely transport and communication. It is believed that the one which succeeds in overtaking the other would oust the other one out of the competition. Till now both these technologies have moved hand in hand without leaving much to choose between the both. Advancements in communication technology has lead the world into the era of mobiles. This technology is a result of the enhancements in the field of wireless technology. This paper focuses on the field of cellular technology and narrows down... to...
4 Pages(1000 words)Essay

.... Interestingly, I plan to have a mentor from the training institution to help me through the learning process. Although there are many things to be done, I plan to engage the initiatives one by one. I have undertaken an initiative to switch off the phone while driving to avoid the temptation of communicating through texting. I have also shifted from texting to safer methods of communication such as making calls as opposed to texting. With the use of blue-tooth technology and wireless communication device, I can now call without physically handling my cellphone. Secondly, I have programmed my cellphone to voice message when I am driving...
1 Pages(250 words)Essay

...Ban texting while driving Introduction Texting while driving can be defined as composing, sending, reading e-mails and text messages or making use of the mobile phone features like the web while operating a motor vehicle (MacKinnon, 295). The issue of banning texting while driving has attracted an intense debate with the proponents asserting that is should be implemented to curb road accidents and opponents asserting that it is unenforceable and interferes with privacy of individuals. This practice has been viewed by many transportation experts as dangerous since it increases the driver’s distraction...
5 Pages(1250 words)Research Paper

...Texting while driving With the influx of mobile phones in the market as the primary source of information and communication, there is no limit on how, where and when they are used. Mobile phones are personal devices where the owner dictates on how they can use them. It is the lack of concern and the need to communicate at a particular moment that has put various commuters at risk of injuries and deaths. Texting while driving has become a common practice among individuals who are oblivious to the danger they are causing them and the other commuters. Driving is a skill that requires maximum concentration and attention,...
6 Pages(1500 words)Research Paper
sponsored ads
Save Your Time for More Important Things
Let us write or edit the essay on your topic "Using cellphones while driving" with a personal 20% discount.
GRAB THE BEST PAPER

Let us find you another Essay on topic Using cellphones while driving for FREE!