1.Visit a museum or gallery exhibition or attend a theater, dance, or musical performance - Essay Example

Comments (0)
Add to wishlistDelete from wishlist
Cite this document
Summary
This is located in Tuscaloosa, A l 35487-0340 in Smith Hall on the corner of the Sixth Avenue of the Capstone Drive on University of Alabama Campus. It was during the day and the majority of the attendees were…
Download full paperFile format: .doc, available for editing
HIDE THIS PAPERGRAB THE BEST PAPER97.4% of users find it useful 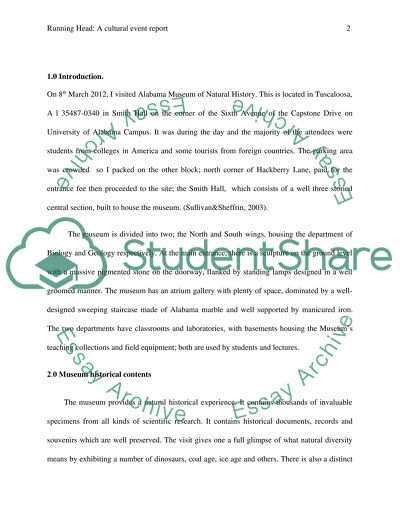 Extract of sample "1.Visit a museum or gallery exhibition or attend a theater, dance, or musical performance"

A REPORT: ON A VISIT TO A MUSEUM al affiliation 7stMarch 0 Introduction. On 8th March Ivisited Alabama Museum of Natural History. This is located in Tuscaloosa, A l 35487-0340 in Smith Hall on the corner of the Sixth Avenue of the Capstone Drive on University of Alabama Campus. It was during the day and the majority of the attendees were students from colleges in America and some tourists from foreign countries. The parking area was crowded so I packed on the other block; north corner of Hackberry Lane, paid for the entrance fee then proceeded to the site; the Smith Hall, which consists of a well three storied central section, built to house the museum. (Sullivan&Sheffrin, 2003).
The museum is divided into two; the North and South wings, housing the department of Biology and Geology respectively. At the main entrance, there is a sculpture on the ground level with a massive pigmented stone on the doorway, flanked by standing lamps designed in a well groomed manner. The museum has an atrium gallery with plenty of space, dominated by a well-designed sweeping staircase made of Alabama marble and well supported by manicured iron. The two departments have classrooms and laboratories, with basements housing the Museum’s teaching collections and field equipment; both are used by students and lectures.
2.0 Museum historical contents
The museum provides a natural historical experience. It contains thousands of invaluable specimens from all kinds of scientific research. It contains historical documents, records and souvenirs which are well preserved. The visit gives one a full glimpse of what natural diversity means by exhibiting a number of dinosaurs, coal age, ice age and others. There is also a distinct exhibition of extinct collections of Geological artefacts and Zoology, which included preserved animals placed in clear enclosed windowpanes. Different minerals were also presented, some old, and having different textures and colours. Examples of the minerals included gem stones, iron ores, silt, diamonds, and specks of copper. Palaeontology items included different types of plant species, shrubs, leaves, seeds and ethnologically written documents explaining facts and whereabouts of different tribes in the world. Lastly, there was a number of photography that was done in different scenes in different time periods, showing different locations, or countries of the world. All the specimens, artefacts and other historical items were all labelled as properties of the museum. The well-marked names, labels and short brief descriptions of the items of specimens provided the learner or the viewer with a clear meaning of what it is all about.
The museum also provided an exhibit of skulls and skeletons of animals with well supported structures of the animals of the world, which did give us an insight into how creatures have developed their skeletal structures and skills during the years. There is a collection of birds, reptiles and insects that gives a diverse species of different types of collections. (Sullivan & Sheffrin, 2003).
3.0 Conclusion
The visit to the museum provided a clear picture of historical experience of what happened in the past decades. This can be used to analyse any community or event culturally, socially or in artistic terms. The report however made the following recommendations:
1. A link should be provided between the different artefacts and collections that are separated in different departments. Those with similar culture and time period should be placed in the same location.
2. The museum should have a modern technological space where the learners and other tourists can access the artefacts without moving around.
References
Sullivan, A.&Sheffrin, S. (2003) Anthropological studies: principles, methods and practices
Upper SaddleRiver, New Jersey, Pearson prentice hall international. Read More
Share:
Tags
Cite this document
(“1.Visit a museum or gallery exhibition or attend a theater, dance, or Essay - 1”, n.d.)
1.Visit a museum or gallery exhibition or attend a theater, dance, or Essay - 1. Retrieved from https://studentshare.org/miscellaneous/1590984-1visit-a-museum-or-gallery-exhibition-or-attend-a-theater-dance-or-musical-performance

“1.Visit a Museum or Gallery Exhibition or Attend a Theater, Dance, or Essay - 1”, n.d. https://studentshare.org/miscellaneous/1590984-1visit-a-museum-or-gallery-exhibition-or-attend-a-theater-dance-or-musical-performance.
Comments (0)
Click to create a comment or rate a document

CHECK THESE SAMPLES OF 1.Visit a museum or gallery exhibition or attend a theater, dance, or musical performance

...Concert Report: Lucinda Williams Live at Dakota Jazz Club Just when I thought it would always spark my interest to focus on the contemporary alternatives of the current mainstream with artists on Billboard’s top 20 and others under major labels, an invitation to watch Lucinda Williams perform at Dakota Jazz Club last February 4 marked an event that shifted my original paradigm of appreciation in music. The concert, which featured Williams' talent with not-so-recent hits for West album, had been creatively enthusiastic. Though most songs depict some independence and peculiar tradition of folk, blues, and rock themes, the fusion can be said to still catch up with the postmodern trend in the relevant...
3 Pages(750 words)Essay

...--- and a research center --- Robert L. Hurst Research Center. There is also a place where 92 flags are prominently displayed and alphabetically arranged by origin and country. These are the regions where there is a considerable number of African descendant residents. Lectures, presentations, film showings, and even live performances are offered at the 317-seating capacity General Motors Theater. Exhibitions and Lectures The core exhibiton And Still We Rise: Our Journey Through African American History and Culture has more than 20 galleries that showcase the tragedies, triumphs, and efforts of all the men and women who fought for freedom from ancient times to modern...
4 Pages(1000 words)Research Paper

...required to source any further funding themselves. Within these 8 weeks, the group achieved a ten fold increase in the project value which totalled £1028. This final value was achieved through the initial department budget, sponsorship (in-kind and cash) and a grant of £200 from the Enterprise Department’s Creativity Fund. Full budget details are attached. The exhibition was well marketed within the Tyne and Wear area and was featured in a range of regional press publications. The success of this is evident in the number of visitors that the gallery attracted. Gallery counters recorded over 308 guests who attended the exhibition’s opening event and a...
6 Pages(1500 words)Essay

...) The Musicals of Roaring Twenties Before 1920s all the films use to silent and were very limited in numbers. But after the release of the film “Jazz Singer” which contained synchronized sound made the critics wondered if the film industry will replace the stage performance altogether. In the period of roaring twenties all the popular songs were dominated by the great theatre writers.Musicals were presented with a very little plot. For example, the Florenz Ziefeld song-and-dance production by Broadway with elaborate costumes and extravagant sets. As a result the musicals became more expensive. (Kenrick, 54) Interview With a Theatrical Professional Date of Interview :...
4 Pages(1000 words)Research Paper

Visit a museum or gallery exhibition or attend a theater, dance, or musical performance

...I attended a gallery exhibition at the National Gallery of Art in Washington DC on February 25th. I toured the East Wing of the gallery, which is dedicated to modern art. I spent about two hours in the East Wing viewing and enjoying the many pieces that were on display in any way that I wanted. I was impressed and inspired by the mobiles of Alexander Calder on the main floor of the East Wing. But even more so, was his work that was displayed in the gallery next to the Matisse Cutouts exhibition. My first impression of the mobiles was that they were interesting forms that caught my eye. There was something about the...
2 Pages(500 words)Essay

1.Visit a museum or gallery exhibition or attend a theater, dance, or musical performance

...A visit to Louvre Museum in Paris Museum exhibitions have been a popular practice among many people, in different areas around the world. These utilities serve many functions. It is undoubtedly that people who attend such facilities gain lot of information related to art and its development over time. Culture, religion, and political lessons are serious issues of interest learnt from the artistic expressions (Edward, 2008). The Louvre Museum is obviously one of the most visited museums in the world. That way I found myself on a mission to the renowned Louvre, in Paris. The museum as I came to realize is home to spectacular and stunning artwork exhibition. There is abundant collection of art that simply breath-taking... painting, “The...
2 Pages(500 words)Essay

...Museum Visit Number] Mummy Mask of a Lady (Courtesy of Cantor Arts Center Stanford Visit to Cantor Arts Center at Stanford University was a thought provoking and rich experience entailing trip. The 24 galleries of the museum were full of sculptures and portraits. Although, most of them were sculptures gathered from Asia, Africa, Egypt, Europe & America, but collection of arts and craft from Native Americans and other states were also on display. The pieces of art displayed, embraced life in them. The showcases appealed the viewers to see through them a time and civilization, which was thought to have a strange dream like influence on the viewer. The...
2 Pages(500 words)Assignment

...Museum Visit Question Religion was an essential practice to the Ancient Egyptians. Their religious practices werehighly influenced by their culture and tradition. This is the reason why their religion was not influenced by other cultural practices from other parts of the world. They emulated conditions that they believed had existed since the creation period (Rosicrucian Egyptian Museum & Planetarium 1). Their religion was a polytheistic religion (believing in many gods) with one short period of one god (monotheism). They believed in about 700 different goddesses and gods (Rosicrucian Egyptian Museum & Planetarium 1). Question # 2 The...
2 Pages(500 words)Assignment

... The three museums The role of the Blue Grass Trust for Historic Preservation is to protect, revitalize as well as promote thehistoric places such as the Hunt-Morgan House in the community. Hunt-Morgan House is a reminder of the 19th century that was constructed in 1814. It has many architectural features, the Kentucky furniture. The second floor of the House constitute of the Alexander T. Hunt Civil War Museum which has a diverse collection of not only Civil War relics, but also memorabilia. The Pope Villa, a unique historic design in America is also regarded as one of the most crucial buildings of Federal America. Ashland is also a historic place that is maintained through donations. It has beautiful sceneries for refreshment... . The...
2 Pages(500 words)Essay

...Museum Visit: Insight View Of Artistic Works The museum visit presents a series of experiences that connects the artistic works to the actual representation and communication to the viewers; the arts communicate the ideas as well as the provision of fun to the individuals. Several questions are raised concerning the arts; however, one remains on the horizon of the configuration of the symbolism. The hidden messages created and presented; the intended meaning in the literal meaning and deep insight of the picture. Therefore, individual experiences are integrated and deduced. It is as sampled and presented in the artistic works below: The art shows the events that take...
4 Pages(1000 words)Essay
sponsored ads
Save Your Time for More Important Things
Let us write or edit the essay on your topic "1.Visit a museum or gallery exhibition or attend a theater, dance, or musical performance" with a personal 20% discount.
GRAB THE BEST PAPER

Let us find you another Essay on topic 1.Visit a museum or gallery exhibition or attend a theater, dance, or musical performance for FREE!