Comments (0)
Add to wishlistDelete from wishlist
Cite this document
Summary
Being a leader is not easy; it poses many challenges and the person who overcomes these challenges make a successful leader. A leader instills confidence and…
Download full paperFile format: .doc, available for editing
HIDE THIS PAPERGRAB THE BEST PAPER96.1% of users find it useful 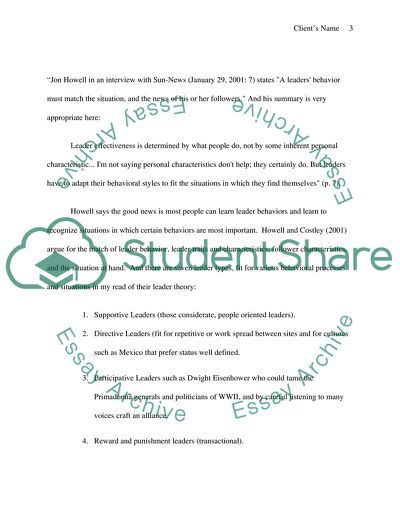 Download file to see previous pages n is considered to be one of the most important factors and all most all the companies look for new methods to motivate the employees and to bring out the best out of them. This paper will focus upon the different leadership behaviors and the best leadership behavior which should be adopted to meet the company’s goals.
Good leaders are very hard to find, good leaders know how to get the best out of others and good leaders are those who keep others motivated and focused at all times. These qualities are very hard to get in an individual but the most successful leaders are all well equipped with these great qualities.
Leader effectiveness is determined by what people do, not by some inherent personal characteristic... Im not saying personal characteristics dont help; they certainly do. But leaders have to adapt their behavioral styles to fit the situations in which they find themselves" (p. 7).
Howell says the good news is most people can learn leader behaviors and learn to recognize situations in which certain behaviors are most important.  Howell and Costley (2001) argue for the match of leader behavior, leader traits and characteristics, follower characteristics, and the situation at hand.  And there are seven leader types, fit for various behavioral processes and situations in my read of their leader theory:
And now we have left the obsession with one best style of leadership. There is no universal style. There is as I have suggested, a dimension of behaviors running between Transactional and Transformational. The behavior school to this point is fixated on the transactional. To find transformational we must sail to the Isle of Situation.” ( Howell and Costley). The same principles of Howell and Costley are elucidates in the paper.
There are mainly five major behavior patterns namely, supportive behavior, directive behavior, participative behavior, reward and punishment behavior and charismatic behavior. Every behavior pattern has its own pros and ...Download file to see next pagesRead More
Share:
Tags
Cite this document
(“Leadership Challenges and Practices Essay Example | Topics and Well Written Essays - 2250 words”, n.d.)
Leadership Challenges and Practices Essay Example | Topics and Well Written Essays - 2250 words. Retrieved from https://studentshare.org/miscellaneous/1590663-leadership-challenges-and-practices

CHECK THESE SAMPLES OF Leadership Challenges and Practices

Cooper and Santora (2005) indicated that with other organizational variables, leadership character promotes sustainable organizational cultures that balance economic and moral imperatives as part of their overall strategic missions. The present case explains how a leader’s character, behavior, and decisions shaped the behavior and performance of workers in a large recycling plant.
In short, Steinar’s advent started with emblematic changes that moved the workers at the plant. Firstly, he shifted his workstation from previous administrative buildings to the area where the actual work of this section happened. This was symbolic of his direct involvement with the team and of providing an assurance of his assistance an...
6 Pages(1500 words)Case Study

The attempts by foreign investments to penetrate China’s market have proven futile in the past especially due to the conservative nature of the inhabitants. China is a strict country when it comes to culture and cultural interaction. For ex...
7 Pages(1750 words)Coursework
sponsored ads
Save Your Time for More Important Things
Let us write or edit the essay on your topic "Leadership Challenges and Practices" with a personal 20% discount.
GRAB THE BEST PAPER

Let us find you another Essay on topic Leadership Challenges and Practices for FREE!