Comments (0)
Add to wishlistDelete from wishlist
Cite this document
Summary
In ancient times, religion remained a major driver of socio-economic and political realities. While the Greek religious tradition relied on a number of gods, the…
Download full paperFile format: .doc, available for editing
HIDE THIS PAPERGRAB THE BEST PAPER97.1% of users find it useful 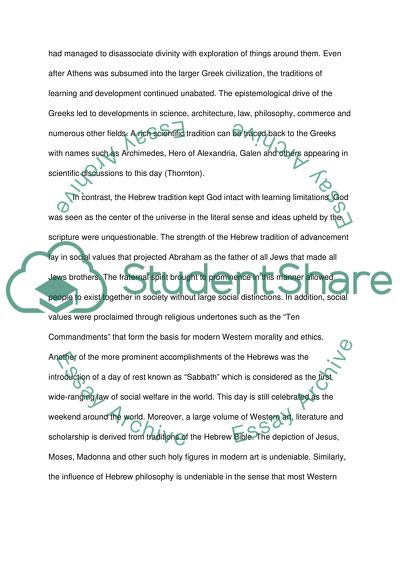 Comparing Greek and Hebrew Civilizations The fundamental difference between the Greek civilization and the Hebrew civilization were their views on religion. In ancient times, religion remained a major driver of socio-economic and political realities. While the Greek religious tradition relied on a number of gods, the Hebrew tradition insisted on the oneness of Moses’ One True God. Furthermore, the Greeks were open to question religious ideas that in turn led to freer thinking. In comparison the Hebrew were reluctant to question God and faith in fear of inculcating God’s wrath that led to thinking that is more conservative. Consequently, the Greek system prepared individuals to serve the state while the Hebrew system prepared individuals to serve God. There is little question that religion played an important part in the social lives of both civilizations but dogmatic religious practices are more readily associated with the Hebrew tradition. In similar fashion, the political realities of the day reflected the intrusion of religion into the affairs of the state. The Hebrews believed that God would hold everyone accountable one day so the ruler was expected to be accountable to God alone. In contrast, the Greek system of personal accountability relied on philosophy and on the discretion of fellow men. Hence, the Greek ruler was accountable to his fellow men more than his accountability to any gods. This increased accountability paved for the world’s first democracy in Athens (Blainey).
The achievements of various Athenians such as Aeschylus, Sophocles, Euripides, Herodotus, Thucydides, Hippocrates, Socrates, Plato and Aristotle among others laid the foundation for the modern Western civilization. The move to democracy strengthened the Greek quest for knowledge. Furthermore, the Greeks had managed to disassociate divinity with exploration of things around them. Even after Athens was subsumed into the larger Greek civilization, the traditions of learning and development continued unabated. The epistemological drive of the Greeks led to developments in science, architecture, law, philosophy, commerce and numerous other fields. A rich scientific tradition can be traced back to the Greeks with names such as Archimedes, Hero of Alexandria, Galen and others appearing in scientific discussions to this day (Thornton).
In contrast, the Hebrew tradition kept God intact with learning limitations. God was seen as the center of the universe in the literal sense and ideas upheld by the scripture were unquestionable. The strength of the Hebrew tradition of advancement lay in social values that projected Abraham as the father of all Jews that made all Jews brothers. The fraternal spirit brought to prominence in this manner allowed people to exist together in society without large social distinctions. In addition, social values were proclaimed through religious undertones such as the “Ten Commandments” that form the basis for modern Western morality and ethics. Another of the more prominent accomplishments of the Hebrews was the introduction of a day of rest known as “Sabbath” which is considered as the first wide-ranging law of social welfare in the world. This day is still celebrated as the weekend around the world. Moreover, a large volume of Western art, literature and scholarship is derived from traditions of the Hebrew Bible. The depiction of Jesus, Moses, Madonna and other such holy figures in modern art is undeniable. Similarly, the influence of Hebrew philosophy is undeniable in the sense that most Western philosophy tends to either deny or acknowledge these ideas including philosophy derived from the Greek tradition to support or deny these claims (Wilken).
Bibliography
Blainey, Geoffrey. A Very Short History of the World. London: Penguin Books, 2004.
Thornton, Bruce. Greek Ways: How the Greeks Created Western Civilization. New York: Encounter Books, 2002.
Wilken, Robert L. The Spirit of Early Christian Thought. New Haven: Yale University Press, 2003. Read More
Share:
Tags
Cite this document
(“Western civ (Greeks Vs, Hebrews) Essay Example | Topics and Well Written Essays - 500 words”, n.d.)
Retrieved from https://studentshare.org/miscellaneous/1589963-western-civ-greeks-vs-hebrews

CHECK THESE SAMPLES OF Western civ (Greeks Vs, Hebrews)

..., the choir setting in Greek plays also demonstrates the ideals of democracy in Athens. Studies relating performing arts assert that “Performance reflects, encodes cultural models” (Goldhill and Osborne, 27). Democracy is expressed by the choir’s actions since the soloist is allowed to reflect on what the collective body has to say. Hence, even in drama, the assembly is mimicked as an individual needs to assert his opinion to the public. It can be said then the elements of performance in Greek theater is highly-influenced by the social milieu. It seems that anywhere (culture, art, philosophy) you turn to in Hellenic Greece displays democratic ideals. People can speak their mind during assemblies....
3 Pages(750 words)Essay

...? History 101 Western Civ The Persian Wars (499-479 BC) were fought between the Greek s and the Persians. Within this scenario, the relationship between Athens and the other Greek city states is noteworthy and the foretold war helped the Greek city-states to be united under Athens and to fight against external invasion. Besides, the Persian wars ignited hatred and jealousy among the Spartans and eventually led to the Peloponnesian War (431-404 BC) and the decline of Athens as the strongest city state among the Greek city states. Thesis statement: The Persian Wars united the Greek city-states, but eventually led to the...
3 Pages(750 words)Essay

...?Battle of Marathon: Greeks vs Persians Significance of the Battle The Battle of Marathon is one of the most significant battles of the Greco-PersianWars and had long lasting effects on the war tactics of both the empires and it motivated the ultimate outcome of all the battles fought between the two sides. The battle took place between the Persian army and the citizens of Greek cities of Athens and Plataea in 490 BC (Green 36). The battle was aggress by the Persian king Darius as a reaction to the involvement of Greek cities of Athens and Eretria in Ionian revolt, which was aimed to overthrow the Persian rule. The conflict between the Persian and the...
4 Pages(1000 words)Essay

Explain what the ancient Mesopotamians, Egyptians, Hebrews and Greeks thought and felt about happiness

...making them and has in common the fact despite the fact that what makes one happy does not necessarily translate to others, everyone strives for it in their own way. Therefore, it is important to evaluate the perceptions of happiness by ancient civilizations namely the Greeks, Mesopotamians, Egyptians and Hebrews in order to understand their various interpretations and applications of the concept. Greek philosophers are easily the most influential figures in matters pertains philosophical thought and predictably, they had much to say about happiness. According to Socrates, popularly known as the father of philosophy, the key to happiness is to be found in incisive self-examination and...
3 Pages(750 words)Term Paper

Discussing the ancient hebrews and AT LEAST one other ancient culture

...WESTERN VS NON-WESTERN PSYCHOTHERAPY INTRODUCTION Man's mind is a very complex labyrinth of ideas, perceptions, schemas, and many other things which makes him the most rational being ever created. In this light, many thinkers, dating back from the ancient era have already made attempts in studying the manner by which man think and acts. From Aristotle to the modern day psychologists, these men have created a network of knowledge and a discipline of science which aims to develop and further improve man's life by informing them about how our mind works and at the same time solving our problems using several standard methods. Helping people out in circumstances which entails a closer...
11 Pages(2750 words)Essay

...major turning points in early Hebrew civilization The three major turning points in early Hebrew history are recognition of God as a sovereign being, realization of moral freedom and realization of political freedom. Recognition of God’s sovereignty for instance led to self-awareness. It also established a distinct culture from the rest of the world. Moral freedom also freed the Hebrews from moral agents. Similarly, political philosophies shaped the society’s governance (Perry, et al, p. xx). Roman and Greek cultures The opinion that Roman culture was not original but a copy of the Greek culture is valid. This is because the Romans’ interaction with...
2 Pages(500 words)Essay

...SOCIAL AND ECONOMIC ELEMENTS AND DEVELOPMENTS (FROM 1780 TO 1840) WHICH HELPED INDUSTRIALIZATION TO BEGIN IN BRITAIN THAN IN OTHER PLACES IN EUROPE Industrial Revolution refers to the changes in economic and social organization that began in about 1760 in England and later spread in other countries, characterized by the replacement of hand tools with power-driven machines, such as the power loom and steam engine, and by the concentration of industry in large establishments. The question therefore is, “Why did industrialization begin in England (Britain) and not other countries?” This essay therefore wishes to discuss the social and economic elements and developments which helped industrialization to begin in Britain... AND ECONOMIC ELEMENTS...
2 Pages(500 words)Essay

Doing Business in the United States of America

6 Pages(1500 words)Assignment
sponsored ads
Save Your Time for More Important Things
Let us write or edit the essay on your topic "Western civ (Greeks Vs, Hebrews)" with a personal 20% discount.
GRAB THE BEST PAPER

Let us find you another Essay on topic Western civ (Greeks Vs, Hebrews) for FREE!