Comments (0)
Add to wishlistDelete from wishlist
Cite this document
Summary
Most scholars view Christianity as one of the main reasons that led to its decline. Millions of people ruled by Rome lived hopeless lives where death was inevitable…
Download full paperFile format: .doc, available for editing
HIDE THIS PAPERGRAB THE BEST PAPER93.8% of users find it useful 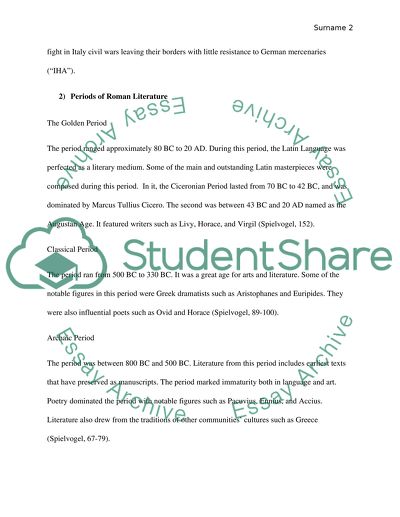 Fall of the Roman Empire There were various proceedings that led to the fall of the Roman Empire, a decline that took about 500 years. Most scholars view Christianity as one of the main reasons that led to its decline. Millions of people ruled by Rome lived hopeless lives where death was inevitable. Christianity taught them that there was life after death. The emperor, Constantine eventually converted to a Christian and assured his subjects protection. The people’s attitude changed from antagonistic to pacifistic and, as a result, their defense weakened and they were overwhelmed by the barbarian attackers (“IHA”).
At the same time, there was high inflation at the empire, and its economy was deteriorating. The state was under constant threats of bankruptcy because its inhabitants resisted sharing the empire’s wealth. Large amounts of gold were sent to the orient to cater for luxury goods that led to a decline on the gold available to make coins. Its currency devalued, and people had to return bartering system of trade (“IHA”).
The empire also had heavy military spending. Its constant wars saw the army overstretched, and it started recruiting the conquered barbarians and other foreign mercenaries. The barbarians later joined up with outside forces to fight the empire. At one time, the Roman soldiers were moved to fight in Italy civil wars leaving their borders with little resistance to German mercenaries (“IHA”).
2) Periods of Roman Literature
The Golden Period
The period ranged approximately 80 BC to 20 AD. During this period, the Latin Language was perfected as a literary medium. Some of the main and outstanding Latin masterpieces were composed during this period. In it, the Ciceronian Period lasted from 70 BC to 42 BC, and was dominated by Marcus Tullius Cicero. The second was between 43 BC and 20 AD named as the Augustan Age. It featured writers such as Livy, Horace, and Virgil (Spielvogel, 152).
Classical Period
The period ran from 500 BC to 330 BC. It was a great age for arts and literature. Some of the notable figures in this period were Greek dramatists such as Aristophanes and Euripides. They were also influential poets such as Ovid and Horace (Spielvogel, 89-100).
Archaic Period
The period was between 800 BC and 500 BC. Literature from this period includes earliest texts that have preserved as manuscripts. The period marked immaturity both in language and art. Poetry dominated the period with notable figures such as Pacuvius, Ennius, and Accius. Literature also drew from the traditions of other communities’ cultures such as Greece (Spielvogel, 67-79).
3) Roman Architecture and Sculpture
Roman architecture was inspired by the Greek world and its traditions. Most of the European cities still have the architectural masterpieces that demonstrate the power of archaic Rome. Both formal and non-formal architecture such as basilicas, temples, and bridges were crucial unifying factors of the empire. Buildings that formed cities made administrative centers that acted as symbols of power in the Empire. Roman sculpture was also a continuation of Greek sculpture. Romans produced large volumes of civic sculpture that was a way of celebrating important figures and statesmen together with their achievements. The sculptures were in three forms namely; busts, statues, and architectural. Some of the statutes are Equestrian Marcus Aurelius and Augustus of Prima Porta. Another great statue is the Colossus of Constantine.
Apart from reflecting the powers of the Empire, architecture also symbolized Christianity. As the number of Christians increased, there came a demand for new buildings. The rise in Christianity ultimately led to the invention of Norman architecture (Thompson, 13).
4) Christian versus Hebrew Faith
Christian faith is all about people who believe and entrust their faith in the gospel of Jesus Christ. The faith began in 1st century in Jerusalem then spread to the Roman Empire and other parts of the world. People who are baptized become Christians. Hebrew faith is Judaism and is a religion of the Jewish people. The religion is based on the ethics and principles as detailed in the Hebrew Bible (Viner).
Christians believe Christ was begot by the Holy Trinity. They believe Christ walked on earth while in the incarnate form of his father, God. He was the fulfillment of the prophesy of the coming savior as detailed in the Old Testament. On the other hand, Judaism recognizes Christ as perhaps a prophet of God and a good teacher. Some practices in Christianity are such as prayers, taking sacraments, reading the bible, worshiping in church, and acts of charity. In Hebrew faith, practices are such as praying three times in a day and worshipping in synagogues among others (Viner).
Works Cited
IHA. "The Fall of the Roman Empire." Ushistory.org. Independence Hall Association. Web. 15 Nov. 2014. .
Spielvogel, Jackson J. Western Civilization: Comprehensive Volume. 4th ed. Belmont, CA: Wadsworth, 2000. Print.
Thompson, Arthur. Architectural Design Procedures. 2nd ed. London: Arnold, 2012. Print.
Viner, James. "Christianity vs. Judaism." Christianity vs Judaism. Christ Church Central. Web. 15 Nov. 2014. . Read More
Share:
Tags
Cite this document
(“Roman Empire Essay Example | Topics and Well Written Essays - 500 words”, n.d.)
Retrieved from https://studentshare.org/history/1666315-roman-empire

CHECK THESE SAMPLES OF Roman Empire

... that Briton was owned by Rome without actually conquering the region. One of the humiliations that he devised for his military commanders for their insubordination in the debacle was to order them to spend their time collecting sea shells on the Gaelic shores, although according to Tinsley this may have been a misinterpreted order as the word for sea shells and the term for the siege works called musculi were the same (245). Caligula announced that he was a god-ruler, deified and divine. He erected statues to himself in various places across the Roman Empire to be worshipped (Tinsley 246). While the truth may not be clear, there is enough evidence of mad behavior to consider his reign to be an uneasy period in Rome. When Caligula... culture...
3 Pages(750 words)Essay

...History 5 April Caligula and the Roman Empire “Caligula” is the nick of Gaius Julius Caesar Germanicus, who was born in AD 12 to Germanicus (nephew of Tiberius) and Agrippina the elder. He spent his early years in the army, travelling with his parents, because his mother wanted to be next to her husband. His parents, trying to gain popularity with the soldiers, dressed their son as the soldier himself. He was wearing the miniature version on military sandals called “caligae”, and the soldiers called him Caligula, which means “little sandal”. In AD 31, when Caligula was 19 years old, he was called by Tiberius to the island of Capri. By that time Caligula’s father was dead and his mother and two brothers...
4 Pages(1000 words)Research Paper

...Roman Empire The Roman Empire was one of world’s strongest and well established kingdoms. The empire had properly established social structures that served various purposes towards unification and solidification of the empire. The empire had well designed amphitheaters, circuses and theaters that hosted various social events and entertainment centers. Theaters were special points for viewing various forms of plays, while the amphitheaters served as action centers for the gladiators. Circuses on the other hand were centers that hosted sports such as horse races. The first and perhaps the biggest circus in the...
3 Pages(750 words)Research Paper

...? ROMAN EMPIRE Lecturer: Rome is undeniably the greatest established empires in the European history and whichdid influence a number of nations in the world. This path to greatness however, was hurdled by numerous challenges key among them resistance from their neighbors who challenged their territorial expansion and economic domination. This scenario saw war inevitable and consequently, Rome sprung into the battle field in many occasions to defend and pursue her interests. Such were a series of wars fought between the Romans and the Carthaginians known as the Punic wars. The second Punic war, fought between 208- 201 BC ( Duiker and Spielvogel 2008 p. 136 ) marks a...
5 Pages(1250 words)Essay

The US: Roman Empire 2

...? THE U.S. - ROMAN EMPIRE 2? (History repeats itself) of (affiliation) Introduction The United s of America is the remaining military superpower after the collapse of the Soviet Union near the end of the Cold War era. But many political experts and historians say America is now on the decline, after achieving so much growth and prosperity in the last two centuries, when it gained its independence from Great Britain. In a sense, America can be exactly compared to the great empires in history, which rose and fell due to a combination of factors that led to loss of power, influence, wealth, prestige, and especially, the sense of nationhood among its citizens. Ancient civilizations like those...
4 Pages(1000 words)Research Paper

...Why did the Roman Empire fall? Ammara Ferwa 050554542 CECN205 Dr. Lucian Dronca Due August 5, 2009 The Roman Empire was one of the largest and most influential Empires. Its influence on architecture, philosophy, law, language, religion and government of nations around the world lasts to this day. Many factors played a role in the fall of Roman Empire: a weakened economy, social changes, invasions and military reasons are the few major causes of decline of the Empire, discussed here. The Emperor Diocletian In the third century the Romans decided to increase the number of people under...
6 Pages(1500 words)Essay

...Lecturer Essay # Collapse of the Roman Empire The decline and eventual fall of the Roman Empire in 476 was as a result of a numberof factors. First, during the third century A.D, the economy of Rome weakened significantly (Fergusson, 4). This was as a result of disruption of trade by hostile communities that existed outside the boundaries of the Roman Empire. This forced the government to raise taxes in order to collect revenue, and this led to inflation. In addition, there was a sharp decline in the middle class. This comprised or artisans and merchants who supported the Roman economy. This decline was brought about by...
1 Pages(250 words)Essay

Planning in the Roman Empire

... Planning in the Roman Empire - Imperium Romanum encompassed the entire Mediterranean basin, Middle East as far as theEuphrates River and a large part of the central and northern Europe including Britain. It contained people from different cultures, traditions and beliefs. There was a lot of development of urban life and cities happening during the first two centuries due to the emporium been peaceful, secure and prosperous. This was during the era of Christians. This peace caused development of major cities alog the rivers of Europe, such as Lugdunum (Lyon). The emperor had the role of granting permission for construction of walls, which were not necessarily required except in the frontier areas. The emperor also provided a lot... and...
3 Pages(750 words)Essay

...of Willamette since 2006 to 2007. He taught a quite popular course on the Ancient Magic as well as on Roman Africa, a well received course as well. The author’s main focus is the growth of Rome from scratch into a big empire. He looks at its positioning, technology, the government and strategies employed for growth. Points supporting the growth of Rome include its position which was steep. The author uses this point to show how easy it was to defend the city against the attacks from enemies hence facilitating growth. Rome was ruled by a series of Kings who got advised by the senate that constituted of leading family heads in Rome. This point shows the leadership that lead to the growth of Rome. The way...
1 Pages(250 words)Annotated Bibliography
sponsored ads
Save Your Time for More Important Things
Let us write or edit the essay on your topic "Roman Empire" with a personal 20% discount.
GRAB THE BEST PAPER

Let us find you another Essay on topic Roman Empire for FREE!