Comments (0)
Add to wishlistDelete from wishlist
Cite this document
Summary
When more people are involved, each person simply gets to answer fewer questions. Ideal size probably approximately 10-15.
1. The facilitator will introduce themselves…
Download full paperFile format: .doc, available for editing
HIDE THIS PAPERGRAB THE BEST PAPER96.5% of users find it useful 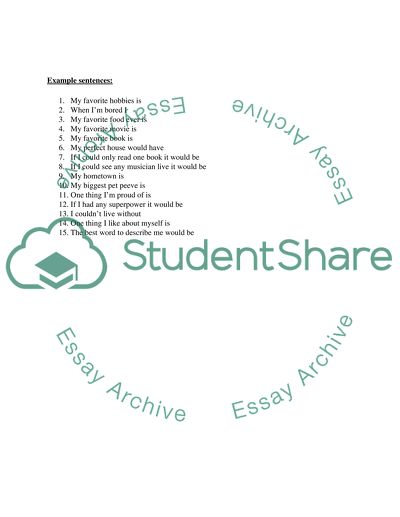 Opening Excersize TMGT 385 Methods and Strategies for al Programs Finish the Sentence Game Purpose To introduce participantsto each other
2. To learn details about other participants’ personal life, hobbies and so on, to form communal ground and topics of conversation.
Ideal Class Size
One of the ideals of this game is that a group from anywhere from 5 to about 30 can participate effectively. When more people are involved, each person simply gets to answer fewer questions. Ideal size probably approximately 10-15.
Time:
5-10 minutes
Room Setup:
Any room set up is appropriate. A whiteboard is ideal
Steps:
1. The facilitator will introduce themselves and explain the process of the ice-breaker; that they will start a sentence, then each person should finish it for themselves (for instance, my favorite flavor of ice cream is:__________).
2. If a white board is available, the facilitator will put the first sentence to finish on the board. If not, the facilitator will simply say the first statement
3. The facilitator will then demonstrate the process, by introducing themselves again and finishing the sentence for themselves
4. Each person will then go around the room and finish the sentence for themselves
5. Repeat as time allows depending on group size.
Debriefing:
Ask participants if they feel they know more details about each other now. A good idea might be to ask participants to name things they have learned about other people in the group, or indicate who they felt they shared commonalities with and why.
Example sentences:
1. My favorite hobbies is
2. When I’m bored I
3. My favorite food ever is
4. My favorite movie is
5. My favorite book is
6. My perfect house would have
7. If I could only read one book it would be
8. If I could see any musician live it would be
9. My hometown is
10. My biggest pet peeve is
11. One thing I’m proud of is
12. If I had any superpower it would be
13. I couldn’t live without
14. One thing I like about myself is
15. The best word to describe me would be Read More
Share:
Tags
Cite this document
(“Opening Exercise (ice breaker) Essay Example | Topics and Well Written Essays - 500 words”, n.d.)
Opening Exercise (ice breaker) Essay Example | Topics and Well Written Essays - 500 words. Retrieved from https://studentshare.org/miscellaneous/1589905-opening-exercise-ice-breaker

...College: Ice and Ice-X Theater Introduction The Ice and Ice X dance ensemble held on campus is an annual event directed by Eric Kupers and Nina Haft. The recent event featured numerous performances by the university’s theater and dance students, as well as, professional performance troupes. The directors sought to showcase the bold and innovative performance works, which combine social activism, music and theater to convey crucial messages to the audience. The dance ensembles focused on a wide array of themes, including politics, family and general societal concerns. For specificity, the performances addressed themes like gender identity, the situation in Iraq and...
4 Pages(1000 words)Essay

...Twain Opening There is little voiced debate that Mark Twain is one of the greatest American of all time. His often brash and slyly satirical wit combined with his mastery of the English Language place him on a pedestal next to a picture of Uncle Sam holding a Bald Eagle as a symbol of American pride and patriotism. Yet very little is publicized about what a voracious anti-war activist and political-reform advocate Mark Twain actually was. In a lesser known but incredibly powerful short fiction by Twain titled "The War Prayer," the author uses his rapier wit and a fountain pen to voice his ironclad opinions on American involvement in foreign wars, the complete disillusionment of the Christian Religion, and questions the...
1 Pages(250 words)Essay

...The effects of shape of ice on its melting time. Different shapes of ice of same mass and density melt at different rates. This was proved by an experiment in which we noted the melting time of ice frozen in different shapes of medicine bottles. To carry out the experiment the apparatus we used included four medicine bottles with different diameters, water, glass, an ounce measure, freezer, ruler and clock. To perform the experiment we first numbered the four different medicine bottles. We then put 1 ounce of water in each bottle and placed each bottle in the freezer. Then we waited until the water in all the bottles froze and turned into ice. We then took out the...
2 Pages(500 words)Lab Report

...caused by the foreign exchange risks, global companies practice money hedging. By large, global companies reduce the effect of foreign exchange risks by using various forms of hedging (insuring against the price of an item) through a bank. In terms of foreign exchange related risks, global companies make sure that they are insured against the price of currency which is considered as a moving item in the future. There are three types of hedging generally used in the money market. These are Forward Foreign Exchange Contracts, Opening Foreign Currency Accounts, and Buying Currency Options. Q3: How do you define the global monetary and financial system What are the international and regional institutions that comprise the...
2 Pages(500 words)Essay

...The Dew Breaker Table of Contents On the Ancient Egyptians and Mourning 3 Works Cited 6 On the Ancient Egyptians and Mourning ““They know how to grieve,”, hed say, marveling at the mummification process that went on for weeks but resulted in corpses that survived thousands of years.” (Danticat 12-13). Thus Danticat drops one hint with regard to the nature of her fathers relationship with death and the grieving process, through that seemingly innocent fascination with museums in general and the ancient Egyptians in particular, the artifacts of their great ancient civilization, their beautiful queens, and their grieving and burial practices. This paper asserts that the hint is a building block, ever so delicately placed,...
2 Pages(500 words)Assignment

...﻿Chasing Ice Basic Information about the Movie The title of the movie is Chasing Ice produced by a team of people: the executive producers being; David and Linda Cornfield, associate producers being, Stacy Sherman and Billy Ray and the writer being Mark Monroe. The characters in the film are Adam LeWinter, Svavar Jonatansson, Larissa Rhodes, Lindsay Friedman and Sierra Voss. Since this was a real life experience, there were tour directors and managers and the persons in charge were recognized in the movie as Dr. Tad Pfeffer as the tour manager and Dr. Jason Box as the scientist. The director of the movie in the script writing is James Balog (Merli 1). Analysis of the Film As the film is about the...
2 Pages(500 words)Movie Review

... Teacher Guessing Game I. Purpose a. The purpose of the game is to teach members how to solve communication issues and to understandterms, concepts about a certain subject. b. HR words and concepts like employee relations, retention, attrition, motivation, performance, feedback, will be learned by the participants through a game. c. The game will also help participants to realize the value of communicating properly to be understood especially in an organizational setting where there are a lot of factors that could hamper communication. II. Ideal size The game is composed of two teams with one moderator. Being such, the ideal number is odd and that includes the number of the team members. The idea of having an odd number... Teacher Guessing...
3 Pages(750 words)Essay

...Teacher that thing I. Purpose To serve as an ice breaker of a new and allow to know each other through a game To acquaint students with HR terminologies and concepts in a fun way It is expected that after the game, the students will be acquainted with the concepts of human resource, employee relations, performance appraisal, productivity and other similar terms used in the class. II. Ideal team size Ideal team size is less than 10 individuals to make it less chaotic. The number of teams can be as many as four teams. The team members can take turns in playing the game. There has to be a one person moderator which could be a member of the class or the teacher. III. Materials needed White board, pentel...
3 Pages(750 words)Assignment

...Ice Breaker Insert Insert The article deals with how to get people from diverse walks at the of West Virginia to embrace and listen to each other (Humanresources.ext.wvu.edu, 2015). Icebreakers are a good way to relax a group especially after a stressing or a challenging situation so as to bring the members together. The process should have considerations such as the age and suitability of the icebreaker to the group. Despite ice breakers having the intention of enhancing the team spirit, it may be very challenging when dealing with a very diverse group. For example, making sure that everyone is wholly inclusive and part of the team comes with a greater challenge is such...
1 Pages(250 words)Article
sponsored ads
Save Your Time for More Important Things
Let us write or edit the essay on your topic "Opening Exercise (ice breaker)" with a personal 20% discount.
GRAB THE BEST PAPER

Let us find you another Essay on topic Opening Exercise (ice breaker) for FREE!