Comments (0)
Add to wishlistDelete from wishlist
Cite this document
Summary
The essay aims to address a two-fold objective to wit: (1) to describe applicable variables related to vulnerability of chronically ill and disabled population; and (2) to analyze the effect of multiple variables on the chronically ill and disabled population in terms of…
Download full paperFile format: .doc, available for editing
HIDE THIS PAPERGRAB THE BEST PAPER98.9% of users find it useful 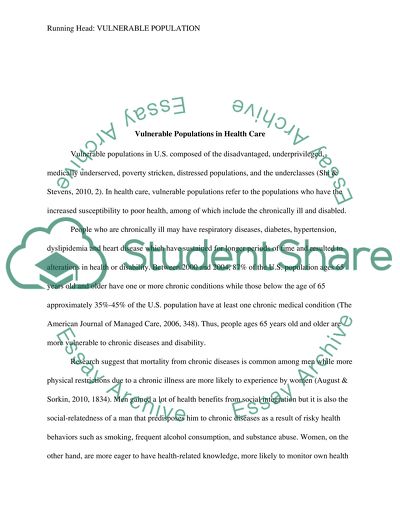 Vulnerable Populations in Health Care The essay aims to address a two-fold objective to wit to describe applicable variables related to vulnerability of chronically ill and disabled population; and (2) to analyze the effect of multiple variables on the chronically ill and disabled population in terms of morbidity, mortality, and health.
Vulnerable Populations in Health Care
Vulnerable populations in U.S. composed of the disadvantaged, underprivileged, medically underserved, poverty stricken, distressed populations, and the underclasses (Shi & Stevens, 2010, 2). In health care, vulnerable populations refer to the populations who have the increased susceptibility to poor health, among of which include the chronically ill and disabled.
People who are chronically ill may have respiratory diseases, diabetes, hypertension, dyslipidemia and heart disease which have sustained for longer periods of time and resulted to alterations in health or disability. Between 2000 and 2004, 87% of the U.S. population ages 65 years old and older have one or more chronic conditions while those below the age of 65 approximately 35%-45% of the U.S. population have at least one chronic medical condition (The American Journal of Managed Care, 2006, 348). Thus, people ages 65 years old and older are more vulnerable to chronic diseases and disability.
Research suggest that mortality from chronic diseases is common among men while more physical restrictions due to a chronic illness are more likely to experience by women (August & Sorkin, 2010, 1834). Men gained a lot of health benefits from social integration but it is also the social-relatedness of a man that predisposes him to chronic diseases as a result of risky health behaviors such as smoking, frequent alcohol consumption, and substance abuse. Women, on the other hand, are more eager to have health-related knowledge, more likely to monitor own health status, and less likely to engage in risky health behaviors (August & Sorkin, 2010, 1834). Thus, men are more vulnerable to chronic conditions and disability compared to women.
Living with a chronic condition and suffering from disability are the realities for majority of the population in the United States; however, chronic illnesses prevalence varies across racial and ethnic groups. Minority populations include African Americans, Hispanic, and Native Americans while the Caucasians are the majority population. Racial and ethnic minorities are more vulnerable to chronic illness and experience greater complications and higher death rates compared to the majority population (Gallant, Spitze & Grove, 2010, 21). African Americans have the highest rates of chronic illness among all other race or ethnic groups, including the rates from hypertension, diabetes, and arthritis; Latinos are the largest minority group in U.S. and the rates of diabetes are higher than the Caucasians; Asian Americans have the lowest rates of chronic illness among all other race or ethnic groups except for the prevalence of hypertension which is higher than Latinos and Caucasians; American Indians experience significant burden from chronic disease and have the highest rates of heart disease, diabetes, and arthritis that are comparable among African Americans (Gallant, Spitze & Grove, 2010, 23-30). Therefore, African Americans and Native Americans (American Indian) are the ethnic minorities that are more vulnerable to chronic illness and disability.
Income rates significantly affect the health of the vulnerable population. Chronic illnesses are more prevalent in low-income groups than in high income groups (The American Journal of Managed Care, 2006, 349). People with chronic illnesses often intend not to receive or to delay necessary medical, dental, and mental healthcare and to not fill prescription. Basic needs are prioritized over health needs because of scarcity of resources. On the other hand, people with high income group can include health in the priority needs because income rates are sufficient enough to cover all essential and leisure needs.
The impact of chronic illnesses and disabilities to health are more severe in the less educated. According to the studies, patients with a chronic illness who have less than a high school education are 3 times more likely to report being in poor health than those with the same illness who hold a college degree (The American Journal of Managed Care, 2006, 349). For instance, African Americans and Native Americans rate their own health as fair or poor than in other racial or ethnic minorities. Based upon on the identified relationship of the self-perception of health and education, one can depict that African and Native Americans rate their own health as fair or poor because most of the samples included in the study report have low educational level.
References
August, K.J. & Sorkin, D.H. (2010). Marital Status and Gender Differences in Managing a Chronic Illness: The Function of Health-Related Social Control. Social Science and Medicine, 71(10): pp. 1831-1838. Doi:10.1016/j.socscimed.2010.08.022.
Gallant, M.P., Spitze, G. & Grove, J.G. (2010). Chronic Illness Self-care and the Family Lives of Older Adults: A Synthetic Review across Four Ethnic Groups. Journal of Cross Cultural Gerontology, 25(1): pp. 21-43. Doi: 10.1007/s10823-010-9112-z.
Shi, L. & Stevens, G.D. (2010). A General Framework to Study Vulnerable Population. Vulnerable Populations in the United States (2nd ed.) (p. 1-34). California: John Wiley & Sons, Inc.
The American Journal of Managed Care. (2006). Vulnerable Populations: Who Are They? The American Journal of Managed Care, 12(13): pp. 348-352. Read More
Share:
Tags
Cite this document
(“Vulnerable populations in Health Care Assignment”, n.d.)
Vulnerable populations in Health Care Assignment. Retrieved from https://studentshare.org/miscellaneous/1589062-vulnerable-populations-in-health-care

CHECK THESE SAMPLES OF Vulnerable populations in Health Care

Vulnerable Populations And Self Assessment

...the person of providing cares to these elderly population of the society are on a considerable decrease. (Amrita institute of Medical Sciences, n.d) Thus the Geriatric population of the society is the vulnerable group chosen for the study. Demographics of the vulnerable population In the year 1900 the rate of life expectancy at birth was measured to be 47.3 years which experienced a considerable increase to 78 years in the year 2009. The populations of the geriatrics are experiencing a considerable increase with the improvement in the health care facilities and innovations of modern...
6 Pages(1500 words)Research Paper

...?Introduction Great advances in information, research, and technology have led to leaps in the field of health care. More people now enjoy better health provisions, with significant improvements in mortality and morbidity statistics and quality of life. However, the enjoyment of these health care rights is still far from universal. There still exist certain populations, labelled vulnerable groups, which are still deprived of these rights. Vulnerable groups comprise those who, due to multiple factors, can be potentially harmed greatly by a stressor. Vulnerability depends on many things as...
12 Pages(3000 words)Essay

Vulnerable Populations: Focusing on the Homeless

...?Running head: The Homeless Vulnerable Populations: Focusing on the Homeless Introduction Homeless individuals live in extreme circumstances of poverty which results in their failure to dwell in a humane living environment as well as the inability to provide for their own needs. In the 1980s, the United States government estimated that around 200,000 to 500,000 Americans were homeless due to the budget cuts that were the result of an economic crisis (Wallace and Grossman, 2008). The homeless is a vulnerable population due to the physical, psychological, and social health risks that come with their poor lifestyle. Numerous health risks could be associated with the various causes of homelessness. For instance, minors who experience... ...
8 Pages(2000 words)Essay

...?Running Head: Vulnerable Populations Vulnerable Populations [Institute’s INTRODUCTION People who have the propensity of being physically or psychologically offended by nature of their residential place, financial conditions, age, developmental or practical status, health, personal characteristics, communication skill, and presence of persistent disability or illness refer to vulnerable population (Kartikeyan, 2007). According to the National Institutes of Health (NIH), when vulnerable population was compared with the common population, major differences...
3 Pages(750 words)Research Paper

Journey to Learn Oneself

...Vulnerable Populations/Questions Week 2 – Question The National Standards on Culturally and Linguistically Appropriate Services (CLAS) are basically directed towards healthcare organizations. However, individual providers are also motivated to utilize the standards to ensure their practices are more linguistically and culturally accessible. The standards are 14 (US Department of Health & Human Services, 2007). Standard 6 Health care organizations at all times must guarantee the proficiency of language assistance that is basically provided to patients/consumers who are limited to English proficient mainly by interpreters and bilingual staff; friends and...
5 Pages(1250 words)Essay

...are also suffering from limited access to health care and other basic services. Thus, it can be concluded that the socioeconomic status and HIV prevalence are linked together. In such scenario, the people who are living with the infected one must have a positive attitude towards the patients. They should help the patient visit health care centres regularly. Moreover, they need to ensure that they choose safer sex for both the partners (Frontiers Prevention Project, 2007). References Avert International HIV and AIDS Charity. (2011) HIV and AIDS in America. Accessed on 20th October 2011 from http://www.avert.org/america.htm Frontiers Prevention Project (2007). Positive...
2 Pages(500 words)Essay

...such as running. It also provides a very concrete backing of why running and involvement in sports is a recommendable thing for such group of people. It refers to the reports of the United Nations and other researches already done on how involving in sports help in achieving the goals pursued. McInnes, D., Li, A., & Hogan, T. (2013). Opportunities for Engaging Low-Income, Vulnerable Populations in Health Care: A Systematic Review of Homeless Persons' Access to and Use of Information Technologies. American Journal of Public Health, 103(2):1-24 This article by Keith, Alice and Timothy focuses on the accessibility of homeless people and the use of...
6 Pages(1500 words)Annotated Bibliography

...Care for Vulnerable People CARE FOR VULNERABLE PEOPLE Every human being must undergo a series of factors in their life span. Thesefactors may have an effect on their conditions of health either positively or negatively. It is essential to take care of vulnerable people because they need care services from the community because of their disabilities or illnesses. In addition, they might not be in a position to prevent themselves from any form of exploitation or any other kind of harm. In this case, we will use a twenty-two year man who had been examined and proved to have schizophrenia. The questions that...
8 Pages(2000 words)Essay

...Vulnerable population Vulnerability in community health nursing Vulnerability refers to how susceptible individuals or groups or even the population are to harm. Vulnerability emanate from interaction between the available resources to the community or individuals and the challenges of life that they face. It is a consequence of developmental problem, disadvantage due to social status, individual incapacitation, inadequacy of support and personal network, and the complexities of interactions of the named factors during the life course among others. Vulnerability can stem from communal, individual, and...
2 Pages(500 words)Assignment
sponsored ads
Save Your Time for More Important Things
Let us write or edit the assignment on your topic "Vulnerable populations in Health Care" with a personal 20% discount.
GRAB THE BEST PAPER

Let us find you another Assignment on topic Vulnerable populations in Health Care for FREE!