Comments (0)
Add to wishlistDelete from wishlist
Cite this document
Summary
Famine is one of these. Others include hurricanes, volcanic eruptions, earthquakes, among others. There have been debates over the recent past that…
Download full paperFile format: .doc, available for editing
HIDE THIS PAPERGRAB THE BEST PAPER95.8% of users find it useful 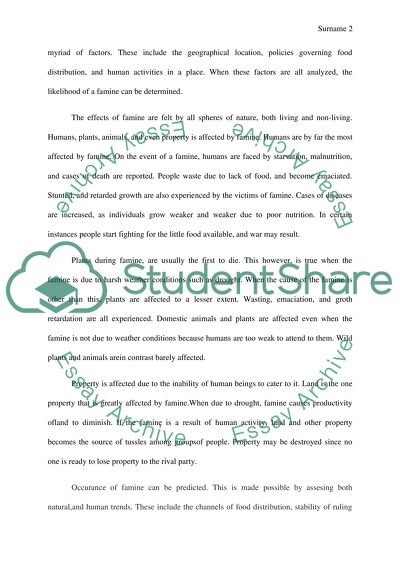 FAMINE Many at times, there are catastrophic occurances that are experienced in nature without a specific reason being attached to them. Famine is one of these. Others include hurricanes, volcanic eruptions, earthquakes, among others. There have been debates over the recent past that arise from the fact these natural hazards take place due to human influence. The intention of this paper is to examine famine as a natural calamity, providing a functional description. In addition to this, this paper will discuss the likelihood of famine occurance, and the consequences it has on various aspects of nature. This paper will further anayze whether famine is a seasonal happening or if it has an annual cycle, its predictability, and the steps that can be taken to prevent it,if there are any.
Famine can be described as the scarcity of food on a largescale. The functional description of famine needs to include the fact that it is a natural hazard that goes on to affect humans. Without it affecting humans, the otherwise natural disaster becomes a natural hazard. It is not a disaster when the human aspect is lacking.
Over time in history, incidences of famine have been experienced repeatdly, and in some regions more than others. This begs for one to view it as a seasonal happening. The seasonal nature of famines is attributed to there being certain human activities that augment the influence of drought. The likelihood of famine to be experienced in a region dependson a myriad of factors. These include the geographical location, policies governing food distribution, and human activities in a place. When these factors are all analyzed, the likelihood of a famine can be determined.
The effects of famine are felt by all spheres of nature, both living and non-living. Humans, plants, animals, and even property is affected by famine. Humans are by far the most affected by famine. On the event of a famine, humans are faced by starvation, malnutrition, and cases of death are reported. People waste due to lack of food, and become emaciated. Stunted, and retarded growth are also experienced by the victims of famine. Cases of diseases are increased, as individuals grow weaker and weaker due to poor nutrition. In certain instances people start fighting for the little food available, and war may result.
Plants during famine, are usually the first to die. This however, is true when the famine is due to harsh weather conditions such as drought. When the cause of the famine is other than this, plants are affected to a lesser extent. Wasting, emaciation, and groth retardation are all experienced. Domestic animals and plants are affected even when the famine is not due to weather conditions because humans are too weak to attend to them. Wild plants and animals arein contrast barely affected.
Property is affected due to the inability of human beings to cater to it. Land is the one property that is greatly affected by famine.When due to drought, famine causes productivity ofland to diminish. If the famine is a result of human activity, land and other property becomes the source of tussles among groupsof people. Property may be destroyed since no one is ready to lose property to the rival party.
Occurance of famine can be predicted. This is made possible by assesing both natural,and human trends. These include the channels of food distribution, stability of ruling regimes, and weather conditions. In cases of prolonged drought, above average rainfall and flooding, famine is deemed impending. When there is an outbreak of pests that devour crops, destroying them, there is a risk of famine. When the channels that are in place for food distribution are wanting,the risk of famine is introduced.
Since famine can be predicted, there are also ways in which it can be evaded. It is possible to avoid famine in a country by ensuring adequate food storage for emergency situations. Another move that can help in preparation for famine, is creation of channels that ensure food distribution reaches every part of the society. Improved farming practices such as irrigation, and using greenhouses can also be used facilitate food availability during harsh weather conditions.
Works Cited
Devereux, Stephen. The new famines: why famines persist in an era of globalization. New
York: Taylor & Francis, 2007.
Edkins, Jenny. Whose hunger?: concepts of famine, practices of aid. Minnesota: U of
Minnesota Press, 2000.
Pettifor, John M. and Stanley Zlotkin. Micronutrient deficiencies during the weaning period
and the first years of life. Basel: Karger Publishers, 2004. Read More
Share:
Tags
Cite this document
(“Famine Essay Example | Topics and Well Written Essays - 500 words”, n.d.)
Retrieved from https://studentshare.org/miscellaneous/1587309-famine

CHECK THESE SAMPLES OF Famine

...the world. The second reason for agreeing with Singer is the fact that ‘developed countries’ have resources to help the hungry. I agree with Singer’s point that instead of terming the act of helping famine victim as a ‘charitable act’, it should be termed as ‘moral obligation’ (Singer 236). So much of food is wasted and thrown away by common people. One can easily feed hundreds of starving people with the amount of the left-over food by people in a developed nation. Also, people make choices regarding the food items and quality. This shows that there is more than enough amount of food related items available in a country. Hence, when a country has the storage of food even after feeding its citizens sufficiently, then it...
3 Pages(750 words)Essay

... of livelihood (Singer, 1972). Countries will not be investing in developments leading to tensions in the future and wars that will create millions of refugees will result. D When we neglect the starving by not sending them food we are therefore not guilty of murder as singer may want to argue to be so. We are not guilty because we are not cause of their dead. We are not the ones who start wars that send them to refugees’ camp and neither were we running the countries economies that fail hence causing their predicament. Work cited Singer P. famine, affluence, and morality. Philosophy and public affairs. Princeton: Princeton university press. 1972. vol. 1, no. 3, 229- 243... College: A The article by Peter Singer is very insightful at the same ...
3 Pages(750 words)Essay

...Famine: A Global Issue Introduction Famine is the acute shortage of food, which is characterized by prolonged hunger over a wide range of population. Famine and hunger cannot be separated, since famine is a resultant state of prolonged hunger. Hunger on its part is an urgent need for food or a specific nutrient by people. A food crisis that leads to death of one person in every ten thousand people affected by the crisis is what is referred to as famine. Severe famine on its part is that situation where five people per every ten thousand affected people dies. Globally, a high number of people are faced with food problems, especially in...
5 Pages(1250 words)Research Paper

...matter. People are innately positioned to consider their own well-being ahead of others (Chao, 2010). The issue of boundaries also limits how proximal people feel an issue is to them, limiting their willingness to act. The implementation of Singer’s idea requires a lot of change in the way we deal with global issues. It will surely come under fire in its initial stages but if we were to adopt the approach suggested in this paper, we will be well on our way to the true image of globalization; equitability on all fronts and access to adequate services for all. References Chao, R. (2010). Does Singer's “Famine, Affluence and Morality” Inescapably Commit Us to His Conclusion? . The Journal of Philosophy, Science & Law ....
3 Pages(750 words)Essay

...Famine: Cause and Effect Everyone is haunted when they see the pictures of famine stricken children on television and are prompted to contribute to an international relief effort. These stark images are most often set against a backdrop of sub-Saharan Africa and we intuitively assume that the population is starving due to the drought conditions. The viewing public also believes that by contributing money and food that it can stop the suffering and save the children. In fact, these assumptions are only partially correct. The causes of famine are far more complex than simply the weather or temporary natural conditions. Social, economic, and political forces are more likely to be the driving...
8 Pages(2000 words)Essay

...For those studying history, perhaps one of the most challenging tasks is to be able to comprehend the meaning of historical events as perceived by people who lived when they were taking place. In this regard, it is really difficult to imagine some horrible episodes of which the world history is full. The Irish Potato Famine is one of such tragic episodes in our history. Nevertheless, this infamous famine is a given fact of history of Ireland and Great Britain, so it is no wonder that it has been carefully studied by historians, and that some quite different opinions have emerged as to what degree this famine was initiated by natural causes and to what extent the famine...
6 Pages(1500 words)Essay

...186867 The Irish famine of 1846-50, said to be one of the major disasters in the world history, set in motion many forces of mobility, discrimination, religious bigotry, negation of national fervour for the sake of livelihood etc. It forced Irish people to look for alternative lives, ruined the health and complacence of a nation, reduced it to beggary. With the potato-killing fungus the starvation and connected health problems death toll reached one million, which was one eighth of the total population. O'grada, in his famous work, argues that a large number of these pathetic deaths could have been prevented with a less doctrinaire attitude to the famine relief. The famine, which is also...
6 Pages(1500 words)Essay

...The Irish Potato Famine In the mid-nineteenth century the very survival of many Irish poor was dependent on the potato crop for various reasons, many of which remain in question today. Internal and external factors depressed the economy of the nation and potatoes were often the lone food source for about three million Irish and the main source for millions more. In attempting to determine the cause of the population decline of the latter half of the nineteenth century in Ireland, researchers have continuously pointed out that “Irish capital markets in the first half of the nineteenth century were severely underdeveloped” which “had crucial implications for the working of the economy.”1 However, it cannot be denied that...
10 Pages(2500 words)Essay

...HOW THE FAMINE MODERNIZED IRELAND It’s hard to realize that some really bad events in a history, very dramatic ones may push countries forward to a progress, modernization and even independence. The country, which passes through one of those events, becomes stressed and depressed by a crisis. But at the same time, such a country gets an opportunity for changes for the best. An Gorta Mor, or the Great Famine of 1845-1849 for Ireland was definitely one of those events. The Famine had reasoned many future changes and provided a new worldview for many Irish. Therefore, The Famine set Ireland on more modern path. Firstly, during The Famine Irish had an...
4 Pages(1000 words)Essay
sponsored ads
Save Your Time for More Important Things
Let us write or edit the essay on your topic "Famine" with a personal 20% discount.
GRAB THE BEST PAPER

Let us find you another Essay on topic Famine for FREE!