Comments (0)
Add to wishlistDelete from wishlist
Cite this document
Summary
Woodrow Wilson was re-elected in 1916 on a clear promise that he would not take the United States into the terrible war that had been raging in Europe since 1914. With the benefit of hindsight, critics have both criticized and praised his eventual decision to backtrack on that…
Download full paperFile format: .doc, available for editing
HIDE THIS PAPERGRAB THE BEST PAPER95.7% of users find it useful 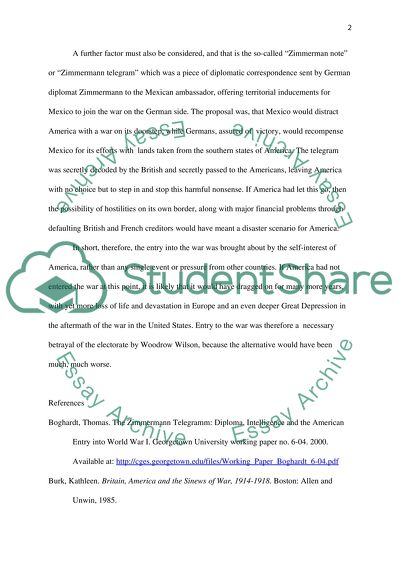 German and the Germans. Woodrow Wilson was re-elected in 1916 on a clear promise that he would not take the United s into the terrible war that had been raging in Europe since 1914. With the benefit of hindsight, critics have both criticized and praised his eventual decision to backtrack on that promise, and take America into that conflict in 1917 after all. One major reason which is often cited as a precursor to that fateful commitment, was the sinking of the passenger ship Lusitania on May 7th May 1917 with the loss of more than a thousand passengers and crew. Widely reported in the British press as “The Hun’s Most Ghastly Crime” (Preston, 2002, p. 308) this attack on a civilian ship severely tested Wilson’s resolve but America remained steadfastly opposed to joining the war until some 22 months later. The sinking of the Lusitania, and the ensuing diplomatic row about U-boat attacks on civilian and supply ships was, not, therefore sufficient reason to justify American entry into the war.
One of the main reasons why America entered the war was to protect its own financial interests: “By September 1916 Britain was purchasing American goods at a rate of over $210 million per month, and France at $38 million per month. (Burk, 1985, p. 14). While Germany also had lucrative trade deals with the United States, it was nothing like at this level, and so America had to think about the possible impact on its own position if the British and their allies should finally lose the war. There would be no possibility in the short term for these colossal debts to be paid back, and this would be bound to have a detrimental effect on the American economy for decades to come. It made financial sense, and indeed it was regarded as a matter of urgent expediency, for America to make sure that the British were on the winning side in this brutal war, and so there were very sound financial reasons why America had to step in and make sure that this would be the final outcome of the war.
A further factor must also be considered, and that is the so-called “Zimmerman note” or “Zimmermann telegram” which was a piece of diplomatic correspondence sent by German diplomat Zimmermann to the Mexican ambassador, offering territorial inducements for Mexico to join the war on the German side. The proposal was, that Mexico would distract America with a war on its doorstep, while Germans, assured of victory, would recompense Mexico for its efforts with lands taken from the southern states of America. The telegram was secretly decoded by the British and secretly passed to the Americans, leaving America with no choice but to step in and stop this harmful nonsense. If America had let this go, then the possibility of hostilities on its own border, along with major financial problems through defaulting British and French creditors would have meant a disaster scenario for America.
In short, therefore, the entry into the war was brought about by the self-interest of America, rather than any single event or pressure from other countries. If America had not entered the war at this point, it is likely that it would have dragged on for many more years, with yet more loss of life and devastation in Europe and an even deeper Great Depression in the aftermath of the war in the United States. Entry to the war was therefore a necessary betrayal of the electorate by Woodrow Wilson, because the alternative would have been much, much worse.

CHECK THESE SAMPLES OF German and Germans class

...and industrial class and supporting monopoly arrangements to ensure increase in investments and profit while on the other side imposing high tariffs on imported grains. It also became a military and economic power globally by the end of the 19th century and Bismarck pushed its social stability further by creating a welfare state and this resulted to growth in Germans’ pride in their country grew to an extent of being called arrogance.1A difference in religious and regional views emerged and the Christian Democrats and Liberal parties started a push for representative democracy and laissez faire. Even though there was cooptation by welfare state, the working class was a bitter lot since...
3 Pages(750 words)Essay

...with them created an ideal notion of what was possible in the United States and but soon became part of mainstream political ideology. Third-party politics, the ascendancy of local issues, and the inertia of German American voters all would move in the direction of appealing to ethnic identity and cultural preservation. Conflicting interests, shifting goals, and practical possibilities were seen as real world of American politics. A real continuum between the liberal Americans in Chicago and German working-class radicalism describes a process of integration that moved through a few steps in improving their relationship. However, the political power was never fully given the...
5 Pages(1250 words)Research Paper

... Sur Supervisor Germans Hitler's table talk, between the period 1941 and 1944, is quite fascinating revealing views of Hitler on several issues that prevailed during the time. It is worth exploring some of the contemporary issues such as nature, religion, God, Christianity or Church and judiciary. Hitler's view on nature and its acts are worth quoting, "At the end of the last century the progress of science and technique led liberalism astray into proclaiming man's mastery of nature, and announcing that he would soon have dominion over space. But a simple storm is enough—and everything collapses like a pack of cards” (Table talk, 5). How true his observations are! In fact, it proves that he has high regards for nature’s doings. He... " (84)....
3 Pages(750 words)Essay

Does collectivism have a future Drawing on theoretical insights and the evidence, critically evaluate the factors that determine its relevance for UK employee relations

This study highlights that from this classroom discussions, it seems that the Germans are very proud of their autobahns. They seem to be a source of national pride in some ways. The reporter has never been to Germany, but he hopes to see the country some day. He would like to experience driving on the autobahn so he can better understand how this highway system fits into the national character of Germans.
According to the study the most important thing that he learned in this class was about Germany’s role in World War II. The reporter knows that this is a favorite topic of many historians because the conflict was so big and has so many different aspects that can be studied. He thinks it is important to see the role that...
4 Pages(1000 words)Essay

...ARAB AND GERMAN HEALTH CARE Introduction Medical treatment differs in every country. Many countries spend more to create the best medical facilitiesin the world while other has different focus such as educational system. Also, there are differences on the approach of their citizens. Germany is one of the most famous countries to have best facilities in medical treatment in the world, known to have an excellent reputation worldwide. Such reputation post great interest to patients from other countries such as those from Gulf and Arab nations. We need to take a look and give importance to our health care system because health should always be in our top priority. Health Care System in Germany German health...
5 Pages(1250 words)Term Paper

... German It is clear that Berlin is becoming “a of monuments”. The area around Brandenburg Gate has a number of Holocaust memorials such as The Memorial to the Homosexuals Persecuted under the National Socialist Regime, The Memorial to the Murdered Jews of Europe, the Sinti and Roma among other memorials. Though in the same location, however, the Memorial to the Murdered Jews of Europe and that of the Homosexuals persecuted under the socialist regime differ widely in size, vicinity as well as their accessibility. This raises many questions than answers as to whether the homosexuals are under-represented in Holocaust Memorization. It is a good idea to have separate memorials for each the affected groups at the same place with same...
1 Pages(250 words)Essay
sponsored ads
Save Your Time for More Important Things
Let us write or edit the essay on your topic "German and Germans class" with a personal 20% discount.
GRAB THE BEST PAPER

Let us find you another Essay on topic German and Germans class for FREE!