Comments (0)
Add to wishlistDelete from wishlist
Cite this document
Summary
The two sides of this debate are very polarized, neither brooking any opposition. The positions are so seriously engrained and so emotional, that it can be very difficult…
Download full paperFile format: .doc, available for editing
HIDE THIS PAPERGRAB THE BEST PAPER96.3% of users find it useful 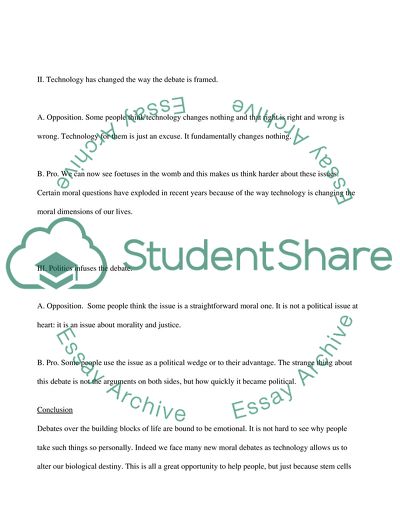 STEM CELL OUTLINE Introduction: One of the gravest moral and ethical issues facing people today is that of stem cell research. The two sides of this debate are very polarized, neither brooking any opposition. The positions are so seriously engrained and so emotional, that it can be very difficult reason things out. The stem cell research debate bring up many philosophical and moral issues such as what constitutes life, when does life begin, and how is life created. These questions are fundamental to our social values and say a lot about the way we think about life.
Thesis: The stem cell debate is highly polarized and reflects many important ethical and moral values at the heart of our society.
I. The issue is polarizing.
A. Opposition. Some people think the issue is black and white. They believe it can be solved simply, sometimes by just interpreting the constitution.
B. Pro. The issue is a nuanced one that society really needs to think about. Whether or not you believe using an embryonic stem cell for research purposes is destroying a potential life, you must admit that it is opening up the possibility for someone else to live longer or better.
II. Technology has changed the way the debate is framed.
A. Opposition. Some people think technology changes nothing and that right is right and wrong is wrong. Technology for them is just an excuse. It fundamentally changes nothing.
B. Pro. We can now see foetuses in the womb and this makes us think harder about these issues. Certain moral questions have exploded in recent years because of the way technology is changing the moral dimensions of our lives.
III. Politics infuses the debate.
A. Opposition. Some people think the issue is a straightforward moral one. It is not a political issue at heart: it is an issue about morality and justice.
B. Pro. Some people use the issue as a political wedge or to their advantage. The strange thing about this debate is not the arguments on both sides, but how quickly it became political.
Conclusion
Debates over the building blocks of life are bound to be emotional. It is not hard to see why people take such things so personally. Indeed we face many new moral debates as technology allows us to alter our biological destiny. This is all a great opportunity to help people, but just because stem cells are useful does not mean we should jump aboard every new bandwagon as it comes along. Cloning for example can offer huge problems. We must carefully examine the evidence at issues at hand before deciding whether we should pursue a new form of scientific research or avoid it altogether.
Work cited
Forman, Lillian. Stem Cell Research, ABDO, 2007.
Gravitz, L.. Medicines New Toolbox. Technology Review, 112(4), 40-43. July, 2009.
Herold, E. Stem cell wars: Inside stories from the frontlines. New York: Palgrave
Macmillan, 2006
Leydesdorff, L., & Hellsten, I. Metaphors and diaphors in science communication: Mapping
the case of stem cell research. Science Communication, 27(1), 64-99, 2005
Peters, Ted. The Stem Cell Debate. New York: Fortress Press, 2007.
Reaves, Jessica. The Great Debate Over Stem Cells. Time Magazine. July 11, 2001. http://www.time.com/time/health/article/0,8599,167245,00.html
Reynolds, Jessie. (). Obama Cools the Stem Cell Debate. San Francisco Chronicle. 27 April 2009. http://www.sfgate.com/cgi-bin/article.cgi?f=/c/a/2009/04/26/EDVN178JTD.DTL Read More
Share:
Tags
Cite this document
(“Stem Cell Research (outline) Essay Example | Topics and Well Written Essays - 500 words”, n.d.)
Stem Cell Research (outline) Essay Example | Topics and Well Written Essays - 500 words. Retrieved from https://studentshare.org/miscellaneous/1570296-stem-cell-research-outline

13 Pages(3250 words)Assignment
sponsored ads
Save Your Time for More Important Things
Let us write or edit the essay on your topic "Stem Cell Research (outline)" with a personal 20% discount.
GRAB THE BEST PAPER

Let us find you another Essay on topic Stem Cell Research (outline) for FREE!