Comments (0)
Add to wishlistDelete from wishlist
Cite this document
Summary
The Oil Pollution Act (OPA) of 1990, while amending section 311 of the Clean Water Act (CWA), gave specific role to the government in prevention the oil spills, responding to oil spills, and subjecting the parties responsible of oil spills to pay for damages (Oil Spills/SPCC 1)…
Download full paperFile format: .doc, available for editing
HIDE THIS PAPERGRAB THE BEST PAPER94% of users find it useful 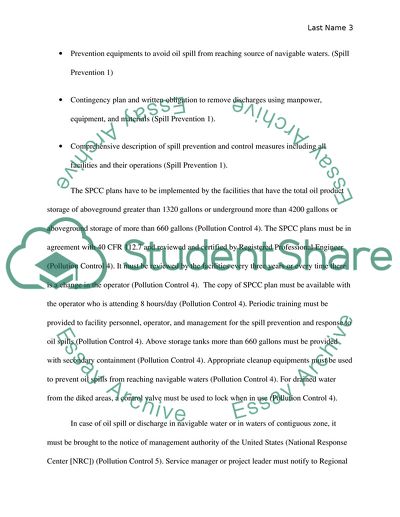 The Clean Water Act (CWA) and the Control of Oil Spills The Oil Pollution Act (OPA) of 1990, while amending section 311 of the Clean Water Act (CWA), gave specific role to the government in prevention the oil spills, responding to oil spills, and subjecting the parties responsible of oil spills to pay for damages (Oil Spills/SPCC 1). Implementation of OPA is a responsibility of Coast Guard and the EPA (Environmental Protection Agency) (Chapter Eight 2). The section in Law that protects the environment from oil discharge is 40 CFR 110, and for Oil Pollution Prevention it is 40 CFR 112 (Pollution Control 1). The section of CWA that prohibits the discharge of threshold amounts of oil or hazardous substances into navigable waters of the United States is Section 311(b)(3) (Oil Spills/SPCC 1). Section 311(j) of CWA reduces the chances of oil spill and prevents the accidental release of stored oil in navigable waters by mandating facilities to prepare Spill Prevention, Control, and Countermeasure (SPCC) plans by storing oil in significant quantities (Oil Spills/SPCC 1). The SPCC plans must be in accordance with the National Contingency Plan (NCP) (Chapter Eight 4). For facilities that have a greater risk of oil spills from storage are required to develop plans to respond rapidly in case of oil spills and clean up.
There are certain policies (SPCC plan) for prevention of oil spills. The SPCC plan must include the following points:
Recorded descriptions of oil spills in the previous year, response actions taken, and plans to avoid future oil spills. (Spill Prevention 1)
Determining the spill direction, quantity, and flow rate in an event of oil spill due to equipment failure. (Spill Prevention 1)
Prevention equipments to avoid oil spill from reaching source of navigable waters. (Spill Prevention 1)
Contingency plan and written obligation to remove discharges using manpower, equipment, and materials (Spill Prevention 1).
Comprehensive description of spill prevention and control measures including all facilities and their operations (Spill Prevention 1).
The SPCC plans have to be implemented by the facilities that have the total oil product storage of aboveground greater than 1320 gallons or underground more than 4200 gallons or aboveground storage of more than 660 gallons (Pollution Control 4). The SPCC plans must be in agreement with 40 CFR 112.7 and reviewed and certified by Registered Professional Engineer (Pollution Control 4). It must be reviewed by the facilities every three years or every time there is a change in the operator (Pollution Control 4). The copy of SPCC plan must be available with the operator who is attending 8 hours/day (Pollution Control 4). Periodic training must be provided to facility personnel, operator, and management for the spill prevention and response to oil spills (Pollution Control 4). Above storage tanks more than 660 gallons must be provided with secondary containment (Pollution Control 4). Appropriate cleanup equipments must be used to prevent oil spills from reaching navigable waters (Pollution Control 4). For drained water from the diked areas, a control valve must be used to lock when in use (Pollution Control 4).
In case of oil spill or discharge in navigable water or in waters of contiguous zone, it must be brought to the notice of management authority of the United States (National Response Center [NRC]) (Pollution Control 5). Service manager or project leader must notify to Regional Spill Coordinator before notifying the NRC (Pollution Control 5). Penalties are applied on facilities due to oil spills. Liabilities are for removal, damage, and trust fund (Pollution Control 5). Liability for Removal Cost includes cost for removing the spilled oil and cost for preventing pollution due to discharge (Chapter Eight 7). Liability of Damage includes recovery of damage to public or private property (Chapter Eight 7). Liability Trust fund is financed by the tax of oil products (Chapter Eight 7). This funds are used to pay removal cost by federal or state authorities, cost incurred by trustees for damage of natural resources, federal administration for implementing and enforcing OPA, and claims for removal cost of uncompensated damages (Chapter Eight 7).
Works Cited
“Chapter Eight: Oil Spills, Clean Water Act § 311, and the Oil Pollution Act.” blm.gov. Bureau
of Land Management (BLM), n. d. Web. 5 Dec. 2009.

...is polluted though oil spillage then there is a likelihood that such oil spills will spread to other territories hence causing adverse effects (Hanable). Conclusion Ending judgments regarding oil spillage pollution within the United States of America clearly states that there is need for owners and other individuals to be significantly involved in ensuring that their vessels meet prescribed requirements. In addition, it is now clear that from different legislations, laws, and regulations, individuals, groups and corporations legally liable to damages arising from oil...
25 Pages(6250 words)Essay

..., n.d.). The recent oil spill furthered people’s hatred for the company, and this can have serious implications upon the profitability of Shell’s business. The crisis was very damaging as oil spill exposes the marine life to numerous health hazards. Oil spill contaminate the water and reduce the content of oxygen in it that is vital to the existence and survival of the marine life. In addition to that, the contaminated water can not be used for any kind of purpose. Discussing the hazardous consequences of this massive oil spill, RSPB Scotland’s director, Stuart Housden...
3 Pages(750 words)Essay

...? Clean Water Act (CWA) by EPA Your al Affiliation This paper explores Clean Water Act initiated by Environmental Protection Agency (EPA) in 1948, modified and expended in 1972 and 1977. The 1972 legislation specified programs for water quality improvement. Since its enactment, the law is continuously expanded and implemented by industries and municipalities. Primarily, water pollution was considered a state and local problem. However, there were no federally required objectives, goals, limitations, or even guidelines. In United States,...
4 Pages(1000 words)Research Paper

..., and complexity. The other main determining factor of the technique to use include whether the oil spill has taken place in the deep sea or near the shore. The following are some of the current methods, which are used to clean oil spills: 1. In-situ burning of oil This is one of the most common techniques that have been used to clean oil spills for decades. It involves burning the oil on the surface of water1. Since oil is immiscible in water, it floats making it possible to burn, leaving water behind. It is used mostly...
31 Pages(7750 words)Research Paper

...in the theoretical and empirical perspectives. It is highly rational to study the microeconomic impact of the oil crisis as the wastage of oil thorough a spill would surely decrease its supply in the world market. A fall in the supply of oil would cause its scarcity in the market and thereby increase its prices. A rise in price of oil would directly increase the cost of transportation and hence all the goods and services produced in the economy. The researcher in the context of the essay would be explaining the microeconomic impact of the oil spill in the economy of United States and the...
4 Pages(1000 words)Essay

...Clean Water Act Clean Water Act Water pollution is one of the major problems facing by United s at present. Heavy industrialization, farming with the help of fertilizers, chemicals and pesticides and other injudicious human activities are polluting the surface water and ground water sources. Clean water act (CWA) was introduced in America with an intention to reduce water pollution activities as much as possible. “Under the CWA, any discharge of a pollutant from a point source is only allowed pursuant to a permit issued by the EPA or by a state agency after EPA approval of a state plan” (Smith, 2009, p.133). According to CWA, the more complex problem associated with the water problems in America, is with respect to the quality... waterways...
2 Pages(500 words)Essay

...Richard Gunawardane CHEM 100–002 02 April Cleaning up Oil Spills Oil spills have caused major problems in the environment, especially in the flora and fauna of our bodies of water. This dilemma is currently addressed by activities and efforts to clean up the oil spills with the participation of the government and even private entities and environmentalists. However, to fully comprehend how the cleaning up process of oil spill works, it is necessary to understand the chemistry behind mitigation of oil...
2 Pages(500 words)Research Paper

...Long-Term Ecological Effects of Oil Spills Following the American Psychological Association Guidelines One of the largest witnessed oil spills in history happened in the Bay of Campeche of the Gulf of Mexico as a result of explosion on at the Ixtoc I platform in 1979. The disaster was caused by failure of blowout preventer functioning and subsequent fire, which resulted in crash of Sedco 135F drilling tower releasing gigantic quantities of oil into the water. The government-owned oil company Permex was trying to stop the leak for more than nine months using several methods and finally drilling two relief wells. Until that...
1 Pages(250 words)Essay

...﻿BP Company Oil Spills Question 1 In April 2010, there was explosion of deep water horizon oil spill by the British Petroleum (BP) Company, which was quite a huge environmental crisis in terms of the oil industry. However, the BP crisis did not only affect the employees but the entire community residing near the Gulf of Mexico, a place where the oil spill occurred. The oil spill was due to a gas leak that was in the oil rig which resulted from the accumulation of hydrocarbons at the Mexican Gulf (Jones 2010). This oil...
4 Pages(1000 words)Case Study
sponsored ads
Save Your Time for More Important Things
Let us write or edit the essay on your topic "Clean Water Act regulate oil spills in the United States (LAW)" with a personal 20% discount.
GRAB THE BEST PAPER

Let us find you another Essay on topic Clean Water Act regulate oil spills in the United States (LAW) for FREE!