Comments (0)
Add to wishlistDelete from wishlist
Cite this document
Summary
Initially, she is unable to understand the true nature of her relationship with her husband. However, with the passage of time and with knowledge as to how her husband…
Download full paperFile format: .doc, available for editing
HIDE THIS PAPERGRAB THE BEST PAPER94.4% of users find it useful 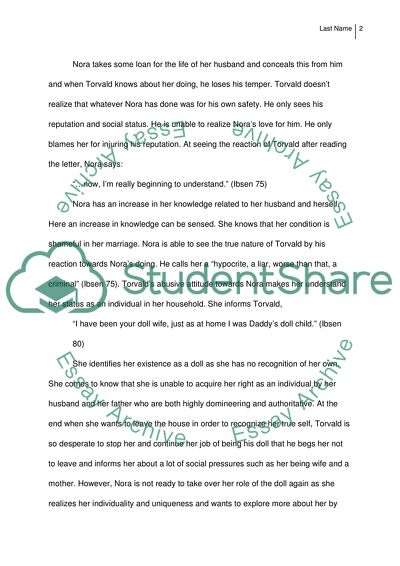 Extract of sample "A Doll's House"

Teacher: A Dolls House A Doll’s House written by Henrik Ibsen shows a continuous growth in the personality of the protagonist, Nora. Initially, she is unable to understand the true nature of her relationship with her husband. However, with the passage of time and with knowledge as to how her husband regards her in actuality, she recognizes her doll like life. She is regarded as a doll and a child figure by her husband, Torvald who is more a father to her than her husband because they are not on equal terms in their marriage. Nora is trapped in a shameful condition that is her marriage with Torvald for whose happiness she suppresses her uniqueness and individuality.
Torvald deals Nora as a father figure as he calls her with different names to indicate towards her inequality in the relationship such as “little sky-lark”, “little squirrel”, “little spendthrift been”, “little pet”, “little one”, little Nora”, “little song-bird” and many more. In every word used for Nora, little is used necessarily and indicates towards the fact that Nora is considered as a child like character who needs training and is in no way equal to her husband. Nora never minds such names and considers her a playful character for her husband’s pleasure and is always ready to amuse him. She acts like her husband’s puppet. She is like a kid who wants her elders to be happy with her.
Nora takes some loan for the life of her husband and conceals this from him and when Torvald knows about her doing, he loses his temper. Torvald doesn’t realize that whatever Nora has done was for his own safety. He only sees his reputation and social status. He is unable to realize Nora’s love for him. He only blames her for injuring his reputation. At seeing the reaction of Torvald after reading the letter, Nora says:
“…now, I’m really beginning to understand.” (Ibsen 75)
Nora has an increase in her knowledge related to her husband and herself. Here an increase in knowledge can be sensed. She knows that her condition is shameful in her marriage. Nora is able to see the true nature of Torvald by his reaction towards Nora’s doing. He calls her a “hypocrite, a liar, worse than that, a criminal” (Ibsen 75). Torvald’s abusive attitude towards Nora makes her understand her status as an individual in her household. She informs Torvald,
“I have been your doll wife, just as at home I was Daddy’s doll child.” (Ibsen 80)
She identifies her existence as a doll as she has no recognition of her own. She comes to know that she is unable to acquire her right as an individual by her husband and her father who are both highly domineering and authoritative. At the end when she wants to leave the house in order to recognize her true self, Torvald is so desperate to stop her and continue her job of being his doll that he begs her not to leave and informs her about a lot of social pressures such as her being wife and a mother. However, Nora is not ready to take over her role of the doll again as she realizes her individuality and uniqueness and wants to explore more about her by giving her some time of her own. She is not ready to give sacrifices for anyone whether it is Torvald or her children.
Nora transformed from being a mere doll to an individual by understanding the true nature of her relationship with her husband. Every individual has value and should lead life according to her life according to her personality, Nora realizes this after gaining knowledge about her shameful marriage relationship with her husband in which, her individuality is suppressed. The ending is a reaffirmation of value of life as Nora is able to know her value and also is able to make her husband know about her worth as an individual. Life is essential for her and by being a doll, she was without any life.
Works Cited
Ibsen, Henrik. A Doll’s House. New York: Oxford University Press, 1991. Read More
Share:
Tags
Cite this document
(“A Doll's House Essay Example | Topics and Well Written Essays - 500 words - 1”, n.d.)
A Doll's House Essay Example | Topics and Well Written Essays - 500 words - 1. Retrieved from https://studentshare.org/miscellaneous/1560036-a-dolls-house

CHECK THESE SAMPLES OF A Doll's House

“Nathaniel’s passivity and indolence appeared especially unmanly in the presence of Robert Manning’s energetic capabilities, not only to the uncle but to the boy himself. The resulting self-distrust was to be permanently in conflict with Hawthorne’s innate pride” (Erlich, 1984). His family’s Puritan past would weigh heavily upon him throughout his life and would be strongly reflected within his writings. Although he was strongly encouraged to take up the family trade and become a merchant marine, Hawthorne had decided, by age 17, that he wanted to be a writer.

Hawthorne’s official education started at the Samuel H. Archer School as preparation for college at the age of 15 and th...

The 1960s saw perhaps the greatest social changes in history. For the first time, young people and their parents were divided. They had different cultural ideas and little middle ground to understand each other. The music tastes, social conventions and political beliefs of the older generation had been violently rejected by a disaffected youth which sought to establish a new social order. These were times of change, times of disaffection and times in which a whole new social network was being established. This took the form of underground movements, independent press, and pirate radio.

The radio, before the advent of television, had long been the tool through which news, politics, music, and culture was diffused to the...

Sentimentality in A Dolls House and Home Is So Sad

... No: Marge Piercys Poem the "Barbie Doll" Analysis Introduction The poem by Marge Piercy, Barbie Doll describes a girlwho kills herself due to her inability to meet the overwhelming cultural and societal expectations that the society places on young girls as they grow up into womanhood. The author presents the gender label using Barbie Doll, an image enforced by the society as the ideal beautiful woman. She seems to concur with the author and feminist activist, Naomi Woolf (2002), who stated that “we are in the midst of a violent backlash against feminism that uses images of female beauty as a political weapon against women’s advancement: the beauty myth…is a dark vein of self-hatred, physical obsessions, terror of aging, and a dread...
10 Pages(2500 words)Research Paper

A teacher is a psychologist who must find a separate approach to every single individual he meets on the way. Thus, teaching is a complex and multifaceted task that requires knowledge, communication skills, and special personality traits. However, being a good teacher is not having an inborn talent, it means being able to improve constantly. In this paper, I want to argue that constant self-development is one of the crucial components that make a great teacher as every quality required from a great teacher is a matter of practice and experience.
There exist certain prerequisites, certain “musts” for being a good teacher. A subject matter knowledge is considered a core of the teacher`s profession. The teacher is s...
8 Pages(2000 words)Case Study

A Doll House by Henrik Ibsen

... Analysis of the Doll House Introduction Henrik Ibsen has written a fabulous play “A Doll House” raising the problems of the woman, and revealing the role of women in a society of that time. The aim of this paper is to explore how individuals come to understand themselves and their place in the world by analyzing one character from Henrik Ibsen’s A Doll House. The analysis will be focused on Nora, the main hero of the play. The paper will attempt to explore the various pressures, influences, and/or stereotypes that shape or attempt to shape a character’s life, perspective, and actions, and also consider if and how the character responds to these factors. Brief overview of the character, Nora Helmer The main hero of the Ibsen’s play...
6 Pages(1500 words)Essay

... The Difference Between Religiousness and Faith in Flannery O`Connor`s “Revelation” The short story “Revelation” by O`Connorexamines one of the most delicate aspects of faith in God – its deep essence and verity. It seems that for most religions adherence to certain rituals and literal following the Scriptures can be enough for considering oneself a true believer but everything is not as simple as it seems. But even interpretation of the Holy texts requires knowledge and ability to grasp the deep meaning behind metaphors. Religion is just the coverage of faith while what real faith means is the major question for all those who believe in God. The principle character of O`Connor`s “Revelation” Mrs. Turpin seems to be perfect Catholic woman...
7 Pages(1750 words)Book Report/Review
sponsored ads
Save Your Time for More Important Things
Let us write or edit the essay on your topic "A Doll's House" with a personal 20% discount.
GRAB THE BEST PAPER

Let us find you another Essay on topic A Doll's House for FREE!