Comments (0)
Add to wishlist Delete from wishlist
Cite this document
Summary
The public policy chosen for this paper concerns the "Do Not Resuscitate" (DNR) internal policy used in the many hospitals in the United States and other countries, including Saudi Arabia. The purpose of this study was to determine whether a policy, with their pertinent rules…
Download full paper File format: .doc, available for editing
HIDE THIS PAPERGRAB THE BEST PAPER91.6% of users find it useful 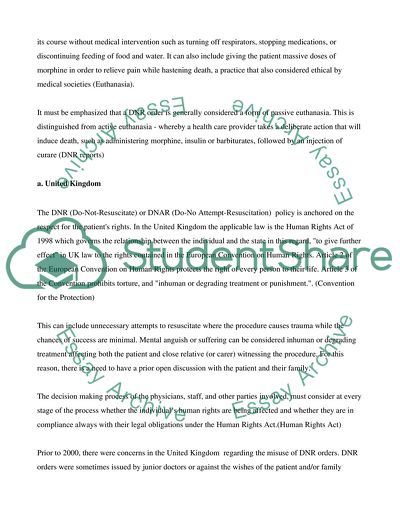 Download file to see previous pages The theoretical foundation and historical background of the DNR concept will be taken up and an attempt will be made to tell what influences can impact the achievement of policy goals, as well as the changes that will be needed to engage stakeholders to improve effectiveness of the policy. Finally, the implication of this generic policy to the Saudi Arabian environment will be explored
Euthanasia ("good death") is an intentional termination of life of a person by another at the explicit person who wishes to die. It is a "mercy killing" of an incurably ill person out of compassion. Active euthanasia is considered murder or manslaughter in most jurisdictions, while passive euthanasia, of which a DNR process is one, is accepted by professional medical societies and is legal under certain circumstances. A DNR order is a notation placed on a patient’s chart which states that if the patient should undergo respiratory or heart failure, no efforts should be made to resuscitate that individual. In passive euthanasia a persons death is hastened by altering some form of support and letting nature take its course without medical intervention such as turning off respirators, stopping medications, or discontinuing feeding of food and water. It can also include giving the patient massive doses of morphine in order to relieve pain while hastening death, a practice that also considered ethical by medical societies (Euthanasia).
It must be emphasized that a DNR order is generally considered a form of passive euthanasia. This is distinguished from active euthanasia - whereby a health care provider takes a deliberate action that will induce death, such as administering morphine, insulin or barbiturates, followed by an injection of curare (DNR reports)
The DNR (Do-Not-Resuscitate) or DNAR (Do-No Attempt-Resuscitation) policy is ...Download file to see next pages Read More
Share:
Tags
Cite this document
(“Health system policy #2 Essay Example | Topics and Well Written Essays - 3000 words”, n.d.)
Health system policy #2 Essay Example | Topics and Well Written Essays - 3000 words. Retrieved from https://studentshare.org/miscellaneous/1560015-health-system-policy-2

The logistics system is designed in such a manner as the combination of various facilities in the transportation at home, and the operations involved in the warehouse and the distribution channels for the manufacturing are the same. The supply chain is a collection of various complicated systems of logistics where they have a collection of raw materials and goods that are useful for the manufacturing of the final product and to the final distributors. “For example, in make-to-assembly (MTA) systems components and semi-finished products are manufactured in a push-based manner while the final assembly stage is pull-based. Hence, the work-in-process inventory at the end of the first stage is used to assemble the finished produc...
15 Pages (3750 words) Coursework

The helpdesk application of open source software “backs-up and extends in-house resources when they are approaching their limits” (GB direct, n.d., par. 26). Even unskilled staff or personnel without any technical knowledge of software applications are assisted by the program to back-up relevant files. This support mechanism of open-source software ca...
6 Pages (1500 words) Assignment

To ensure that the education sector is diversified it is seen that in the United States of America many such policies have been implemented. In 1970s diversity was considered an important tool by the educational experts so that they could help students understand each other. The board of education of North Carolina then formulated a scheme for students through which they could practice a diversity of races in schools. This was known as the North Carolina Wake County Busing Policy which was functional till the late twenty-first century. It was now in July 2010 that the issue was raised again by the educational board members who then decided to scrap the policy of diversity with community-based schools. (Liane Membis 2010; Stacy Tei...
7 Pages (1750 words) Case Study

Each of the members shall, thus, introduce themselves in terms of their educational background and personal experiences for familiarity purposes. Let us begin with Mr. Colbert.
Colbert: I work at Quad Enterprises in the HRM department as the chief manager. I am overly concerned with the current juvenile justice system, bearing in mind that numerous people have debated upon it since time immemorial. I take a categorical interest in this issue since I have been a victim of juvenile violence. My opinion regarding the current trends in this law field is nobly affirmative. The current juvenile system is perfect. Thank you.
Amanda: I currently am a Law lecturer at a University. I am extremely interested in this issue too. My e...
7 Pages (1750 words) Essay
sponsored ads
Save Your Time for More Important Things
Let us write or edit the essay on your topic "Health system policy #2" with a personal 20% discount.
GRAB THE BEST PAPER

Let us find you another Essay on topic Health system policy #2 for FREE!