Comments (0)
Add to wishlistDelete from wishlist
Cite this document
Summary
Here on the right hand side of the table contains the key financial ratios of the most profitable club, while the part in the left hand side signifies the key ratios of the Cardiff unit of Health Hearts club.
b) Profitability Ratio: The difference of the ratio of operating…
Download full paperFile format: .doc, available for editing
HIDE THIS PAPERGRAB THE BEST PAPER98.2% of users find it useful 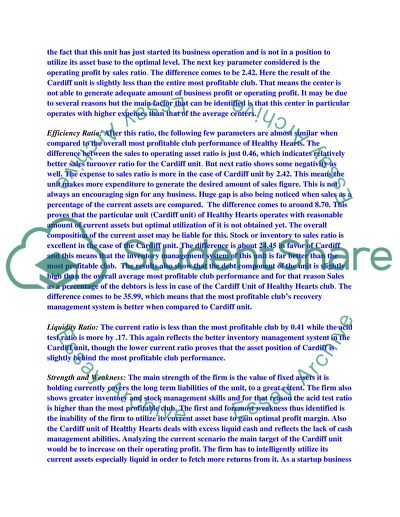 Download file to see previous pages The operating profit or the gross profit provides indication about the actual profit acquired by the business operation. (Berman, Knight, Case, 2006, p.66). The operating profits or the business profits have to be generated from the current assets or the operating assets. The main weakness that the new center has shown that it has somehow failed to utilize its currents assets to gain more operating profit.( “Year Book Australia, 2001 ) That is the reason why the operating profit as a percentage of sales is also very less. Also the operating profit of the Cardiff unit may be lesser as a percentage due to the fact that this unit has just started its business operation and is not in a position to utilize its asset base to the optimal level. The next key parameter considered is the operating profit by sales ratio. The difference comes to be 2.42. Here the result of the Cardiff unit is slightly less than the entire most profitable club. That means the center is not able to generate adequate amount of business profit or operating profit. It may be due to several reasons but the main factor that can be identified is that this center in particular operates with higher expenses than that of the average centers.
Efficiency Ratio: After this ratio, the following few parameters are almost similar when compared to the overall most profitable club performance of Healthy Hearts. The difference between the sales to operating asset ratio is just 0.46, which indicates relatively better sales turnover ratio for the Cardiff unit. But next ratio shows some negativity as well. The expense to sales ratio is more in the case of Cardiff unit by 2.42. This means the unit makes more expenditure to generate the desired amount of sales figure. This is not always an encouraging sign for any business. Huge gap is also being noticed when sales as a percentage of the current assets are compared. The difference comes to around 8.70. ...Download file to see next pagesRead More
Share:
Tags
Cite this document
(“MSc Managing & Accounting for Financial Resources - Healthy Hearts Essay”, n.d.)
MSc Managing & Accounting for Financial Resources - Healthy Hearts Essay. Retrieved from https://studentshare.org/miscellaneous/1559761-msc-managing-accounting-for-financial-resources-healthy-hearts-cardiff-case-description

It is used in the process of decision making because it keeps the past record and future decisions are usually made on the basis of past records.

It is best for the organization where they have homogeneous or similar data. It becomes difficult when it has to deal with heterogeneous data from different operational systems. Different developers and designers adapted different ways to design a data warehouse. The few examples are the there used to be no consistency in encoding, and there were incompatible naming conventions with different physical attributes and their measurements, etc. it depends mainly on integrating the mental models of the designers. According to Bellevue (2002), it is usually required to extract the m...
10 Pages(2500 words)Coursework

What Is Healthy Eating

Information is widely accessible in the form of; books, talk shows, magazines, journals, and programs. However, most people are ignorant and only take time to access this information when they are in need, especially in cases where one is sick. This should not be the case as healthy eating should be more of a routine to all for healthy living. People of all ages are to feed healthily.
Healthy eating involves a variety of things to consume. Water is one of the major components of a good diet. Nutritionists recommend eight to ten glasses of water per day for everyone. Water lacks calories and thus the body does not need to digest it, rather it absorbs and keeps the body clean. It reduces sugar levels and washes off toxins found...
8 Pages(2000 words)Coursework
sponsored ads
Save Your Time for More Important Things
Let us write or edit the essay on your topic "MSc Managing & Accounting for Financial Resources - Healthy Hearts Cardiff case description" with a personal 20% discount.
GRAB THE BEST PAPER