Comments (0)
Add to wishlistDelete from wishlist
Cite this document
Summary
For adults, BP greater than 140mmHg is referred as systolic and BP greater than 90mmHg is called diastolic (Delgado and Dart, 2004, p. 149). Hypertension can be either essential or secondary…
Download full paperFile format: .doc, available for editing
HIDE THIS PAPERGRAB THE BEST PAPER97.3% of users find it useful 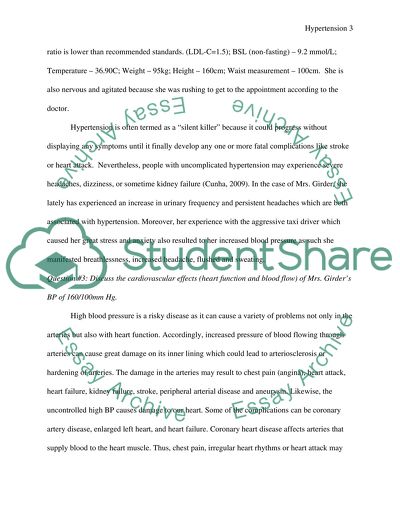 Download file to see previous pages On the other hand, secondary hypertension refers to hypertension brought about by secondary causes like Cushing’s syndrome or other congenital abnormalities (Wellhoner et al, 2009).
Given these classifications, Mrs. Girder’s condition is assessed to be related with primary or essential hypertension. Family history of the client suggests a possibility for hypertension as her mother died of heart attack; her father with kidney failure; while her grandmother has type 2 diabetes (age onset). Another key point is that Mrs. Girder’s lifestyle is also contributing to the disease. Her minimal physical activities, uncontrolled diet, tobacco and alcohol intake, stress and agitations, are all significant factors to consider (Warren, 2008).
Based on the client’s observation and test results, her respiration rate is 28 breath/min; pulse is 95 bpm; BP 160/100mm Hg, 2nd reading after 10 minutes resting is 150/95mmHg; Reflectometer cholesterol testing reveals a total cholesterol of 7.5 mmol/L and her HDL:LDL ratio is lower than recommended standards. (LDL-C=1.5); BSL (non-fasting) – 9.2 mmol/L; Temperature – 36.90C; Weight – 95kg; Height – 160cm; Waist measurement – 100cm. She is also nervous and agitated because she was rushing to get to the appointment according to the doctor.
Hypertension is often termed as a “silent killer” because it could progress without displaying any symptoms until it finally develop any one or more fatal complications like stroke or heart attack. Nevertheless, people with uncomplicated hypertension may experience severe headaches, dizziness, or sometime kidney failure (Cunha, 2009). In the case of Mrs. Girder, she lately has experienced an increase in urinary frequency and persistent headaches which are both associated with hypertension. Moreover, her experience with the aggressive taxi driver which caused her great stress and anxiety also resulted to her increased blood pressure ...Download file to see next pagesRead More
Share:
Tags
Cite this document
(“Case study for nursing-hypertension Essay Example | Topics and Well Written Essays - 1250 words”, n.d.)
Retrieved from https://studentshare.org/miscellaneous/1557270-case-study-for-nursing-hypertension

CHECK THESE SAMPLES OF Case study for nursing-hypertension

The Declaration of Helsinki by the WHO clearly states that in clinical trials involving humans the wellbeing of the subject should be of prime importance than the interest of science or society. This has been stated because at times in order to achieve the objectives of a study the investigators might overlook the welfare of the trial subjects thus jeopardizing their health in the process. According to ethical rules while comparing two treatment options the control group of the study must receive the best-known treatment available while the study subjects are given a potential newer treatment. Only when there is no effective treatment available a placebo-controlled group can be used for the study. There have been several trials th...
7 Pages(1750 words)Essay
sponsored ads
Save Your Time for More Important Things
Let us write or edit the essay on your topic "Case study for nursing-hypertension" with a personal 20% discount.
GRAB THE BEST PAPER

Let us find you another Essay on topic Case study for nursing-hypertension for FREE!