Comments (0)
Add to wishlistDelete from wishlist
Cite this document
Summary
A large number of nations depend on tourism as a major source of revenues. The same is true for South Korea also. Tourism contributes significantly in the GDP of South Korea. The…
Download full paperFile format: .doc, available for editing
HIDE THIS PAPERGRAB THE BEST PAPER92.6% of users find it useful 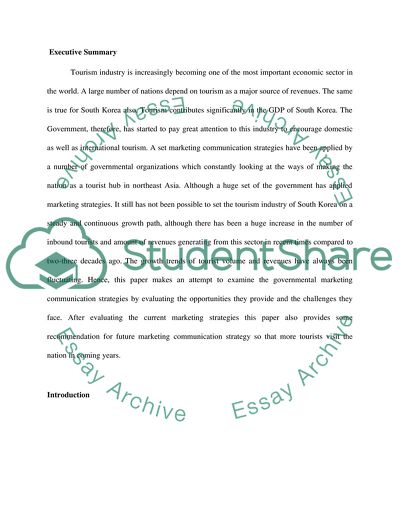 Download file to see previous pages Although a huge set of the government has applied marketing strategies. It still has not been possible to set the tourism industry of South Korea on a steady and continuous growth path, although there has been a huge increase in the number of inbound tourists and amount of revenues generating from this sector in recent times compared to two-three decades ago. The growth trends of tourist volume and revenues have always been fluctuating. Hence, this paper makes an attempt to examine the governmental marketing communication strategies by evaluating the opportunities they provide and the challenges they face. After evaluating the current marketing strategies this paper also provides some recommendation for future marketing communication strategy so that more tourists visit the nation in coming years.
Tourism is one of the largest industries in the world. In most of the countries it belongs to the top three industries. It has become one of the fastest growing sectors and one of the key drivers of the economies. It provides huge number of employment also.
Tourism in any country is influenced by a number of factors like demographical conditions, several social issues, some political drivers like General Agreement on Trades and Tariffs (GATT), agreements on forming several trade blocks, globalization, redrawing of political map, aspects of safety, security, risk factors, climatic conditions, efficiency of human resource elements of the tourism industry, new forms of tourisms, changing pattern of tourism products and so on. Some of these factors can be controlled while some others are beyond any control. Apart from all of these factors, there exists one vital factor to enhance the attractiveness of a place as a tourist destination. It is an appropriate marketing communication strategy, which plays a vital role in increasing the flow of tourists to a certain place. It could be that a particular place possesses immense natural ...Download file to see next pagesRead More
Share:
Tags
Cite this document
(“South Korea's governmental tourism marketing communication strategy Essay”, n.d.)
Retrieved from https://studentshare.org/miscellaneous/1556722-south-koreas-governmental-tourism-marketing-communication-strategy

Marketing is a broad concept that includes all the activities regarding the target market, segmentation, positioning, product, price, promotion, and distribution. Marketing also includes the activities of selling the final products and providing after-sales services. Today marketing is done in various forms, but conceptually there are only two different forms of marketing, one is direct marketing and another one is indirect marketing. This report is all about direct marketing which is one of the oldest concepts of marketing. Since the present age is the age of information, it is quite expected that each and everything in business would be influenced by ‘information’. Direct marketing is not an exception. It is also inf...
6 Pages(1500 words)Coursework

All these benefits get reflected in the result of employee job satisfaction. In Starbucks, the Employee Job Satisfaction rate is 82% as per the report of Hewitt Associates Starbucks Partner V...
6 Pages(1500 words)Assignment
sponsored ads
Save Your Time for More Important Things
Let us write or edit the essay on your topic "South Korea's governmental tourism marketing communication strategy" with a personal 20% discount.
GRAB THE BEST PAPER