Comments (0)
Add to wishlistDelete from wishlist
Cite this document
Summary
You never want to experience anything remotely like the inside of a county jail or see your picture on the front page of the business section of the paper…
Download full paperFile format: .doc, available for editing
HIDE THIS PAPERGRAB THE BEST PAPER94.3% of users find it useful 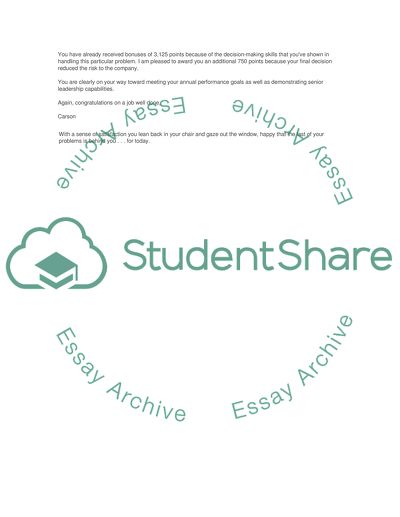 G-BioSport Bonus     Total:   3,000 (out of 6,000) And finally, a break from decision-making . . . You were digesting the implications of Rian’s conversation about the “orange jumpsuit” over your morning cappuccino. You never want to experience anything remotely like the inside of a county jail or see your picture on the front page of the business section of the paper facing a local judge.
In the middle of the second sip, the computer alerts you to a new message in your in-box.
From:
Carson Nelson
To:
benjamin
Bonus
Rian forwarded me the memo you wrote, which evidenced good leadership in this difficult situation.
You have already received bonuses of 2,250 points because of the decision-making skills that youve shown in handling this particular problem. I am pleased to award you an additional 750 points because your final decision reduced the risk to the company.
You are clearly on your way toward meeting your annual performance goals as well as demonstrating senior leadership capabilities.
Again, congratulations on a job well done,
Carson
With a sense of satisfaction you lean back in your chair and gaze out the window, marveling at what you had learned.
End of Dilemma One
You have reached the end of the first dilemma. You will now be presented with a new case which will require you to use the other two lenses: the Relationships Lens and the Reputation Lens.

G-BioSport Bonus
Total:   6,875 (out of 12,000)
And finally, a break from decision-making . . .
You were digesting the implications of Rian’s conversation about the “orange jumpsuit” over your afternoon coffee. You were feeling pretty good about how you had handled the situation.
In the middle of your second sip, the computer alerts you to a new message in your in-box.
From:
Carson Nelson
To:
benjamin
Bonus
Rian forwarded me the memo you wrote, which evidenced good leadership in this difficult situation.
You have already received bonuses of 3,125 points because of the decision-making skills that youve shown in handling this particular problem. I am pleased to award you an additional 750 points because your final decision reduced the risk to the company.
You are clearly on your way toward meeting your annual performance goals as well as demonstrating senior leadership capabilities.
Again, congratulations on a job well done,
Carson
With a sense of satisfaction you lean back in your chair and gaze out the window, happy that the last of your problems is behind you . . . for today. Read More
Share:
Tags
Cite this document
(“Business law Essay Example | Topics and Well Written Essays - 500 words - 4”, n.d.)
Business law Essay Example | Topics and Well Written Essays - 500 words - 4. Retrieved from https://studentshare.org/miscellaneous/1556317-business-law

The Optional Protocol and Article 38 of the Convention on the Rights of the Child were necessitated by the fact that children participate in conflicts directly by b...

10 Pages(2500 words)Term Paper
sponsored ads
Save Your Time for More Important Things
Let us write or edit the essay on your topic "Business law" with a personal 20% discount.
GRAB THE BEST PAPER