Comments (0)
Add to wishlistDelete from wishlist
Cite this document
Summary
Lakewood Police Department Washington, one of the ideal police force of the century, has gained world wide admiration for its community support outreach. The Lakewood Police Department operates a great array of programs for the reduction of crime rates, prevention of narcotics…
Download full paperFile format: .doc, available for editing
HIDE THIS PAPERGRAB THE BEST PAPER98.9% of users find it useful 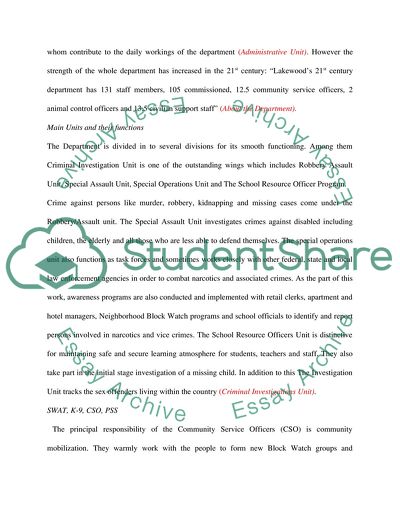 Download file to see previous pages It successfully communicates with people from different backgrounds and also provides vital information, advice, and any time police assistance. Unlike the other police forces, Lakewood Police Department is unique for its objectives and functions. Lakewood police force is specially made for the enforcement of civil and criminal laws, holding the position of court compliance office and community service office, animal control, juvenile code enforcement etc.
As per the ordinance No. 00471, the Police Department operates under the direction of City’s Chief Law Enforcement Officer, the Chief of Police, subject to the supervision of the City Manager. The Chief of the Police is appointed by the City Manager in accordance with the law and policies of city of Lakewood. In accordance with the relevant laws all other subordinates shall be appointed by the Chief (Ordinance No. 00471.City Council meeting minutes of March 17 2008). According to the regulation in Lakewood police, there are five office assistants, two evidence custodians, one crime analyst, one fleet manager, one evidence supervisor, one administrative assistant, one administrative supervisor and one administrative lieutenant all of whom contribute to the daily workings of the department (Administrative Unit). However the strength of the whole department has increased in the 21st century: “Lakewood’s 21st century department has 131 staff members, 105 commissioned, 12.5 community service officers, 2 animal control officers and 13.5 civilian support staff” (About the Department).
The Department is divided in to several divisions for its smooth functioning. Among them Criminal Investigation Unit is one of the outstanding wings which includes Robbery Assault Unit, Special Assault Unit, Special Operations Unit and The School Resource Officer Program.
Crime against persons like murder, robbery, kidnapping and missing cases come under the Robbery/Assault unit. The Special Assault ...Download file to see next pagesRead More
Share:
Tags
Cite this document
(“Lakewood WA Police Department Essay Example | Topics and Well Written Essays - 1250 words”, n.d.)
Lakewood WA Police Department Essay Example | Topics and Well Written Essays - 1250 words. Retrieved from https://studentshare.org/miscellaneous/1552086-lakewood-wa-police-department

...Running Head: Human Resource Management Human Resource Management Executive Summary HR management is the fastest growing management department in organizations that focusing on the broader strategic issues associated with managing people in organizations. This report has discussed concepts of HR Management in Japan. It discusses Japanese perspectives on employment systems and their role that their closer alignment with business strategy characterizes and sustains ability of performance management. Introduction There is a core shift in the responsibilities of the manager to the professional HR manager in Japan. Managers whose main job is HR, and who are abided in a HR department, are progressively more focusing on the broader strategic...
15 Pages(3750 words)Research Paper

This plan discusses the training needs and modules and crisis management. This plan will certainly work well for the present case study and will also act as a strong model for other firms working in the similar line.

1. Identification of staff problems is the urgent need and prioritize them accordingly. In the case study, avoid the migration of staff (Jennifer) by providing a better salary package and working atmosphere.

Organization Development (OD) can be described as an effort, planned, organization-wide, and managed from the top, to increase organization effectiveness and health through planned interventions in the organizations' processes, using behavioral-science knowledge (FN1). It is needed for motiva...
7 Pages(1750 words)Case Study

... stands for. When I attempted to search the internet for the number of civilians killed yearly by the police, I realized that there were no official or valid statistics. Presently, I believe that this could be because police departments do not want this information released and this may also have influenced the media. I only became aware of this lack of reporting on civilian deaths at the hands of police after the shooting of Michael Brown and yet, reading some news reports made me realize that the issue of a national database for police shootings has been ongoing for some time. Why, then, is there such a dearth of information on these deaths in mainstream media. From the media sources that I analyzed, the most prevalent repetitions were...
7 Pages(1750 words)Essay

Some of the cons include breaching of people’s right to freedom, officers misusing this power, corruption and needless killing among others.
This section will conclude which side outweighs the other and recommend what should be done about the use of force. The advantages outweigh the disadvantages, but the people found out that it is best that officers try to use their power in a proper way that protects the public.

The "professional era" of policing started in the 60s after the Omnibus Crime Control and Safe Streets Act came into law, in 1968. The law passed that federal resources and funds would be offered to local agencies to improve their equipment and training (Tyler 84). This concurred with the peak o...
14 Pages(3500 words)Case Study
sponsored ads
Save Your Time for More Important Things
Let us write or edit the essay on your topic "Lakewood WA Police Department" with a personal 20% discount.
GRAB THE BEST PAPER

Let us find you another Essay on topic Lakewood WA Police Department for FREE!