Comments (0)
Add to wishlistDelete from wishlist
Cite this document
Summary
It was also observed that the violence in houses was mainly caused by some person closely associated with the victim. Keeping this in view the governments of major countries…
Download full paperFile format: .doc, available for editing
HIDE THIS PAPERGRAB THE BEST PAPER92% of users find it useful 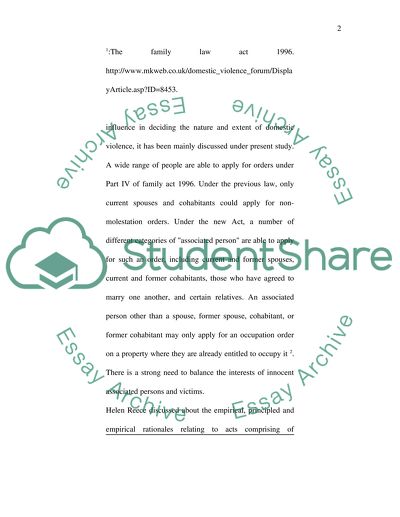 Extract of sample "Critical analysis of the associated persons provisions of Part III of the Family Law Act 1996 (in particular section s.62(3))"

Download file to see previous pages As the ‘associated persons’ clause has major
influence in deciding the nature and extent of domestic violence, it has been mainly discussed under present study. A wide range of people are able to apply for orders under Part IV of family act 1996. Under the previous law, only current spouses and cohabitants could apply for non-molestation orders. Under the new Act, a number of different categories of "associated person" are able to apply for such an order, including current and former spouses, current and former cohabitants, those who have agreed to marry one another, and certain relatives. An associated person other than a spouse, former spouse, cohabitant, or former cohabitant may only apply for an occupation order on a property where they are already entitled to occupy it 2. There is a strong need to balance the interests of innocent associated persons and victims.
Helen Reece discussed about the empirical, principled and empirical rationales relating to acts comprising of ‘associated persons’ clause. He opined that with reference to the empirical rationale, the extent of violence that the
aggregate of associated persons suffers is not high enough to justify privileging associated persons over other citizens with regard to protection from violence. He also pointed that as far as the principled rationale is concerned, the impetus for domestic violence legislation was based on isolation and inequality, which are not experienced in particular by the category of associated persons when taken as a whole. As far as the ideological rationale is concerned, it is saddening to note that intimacy and equality are emerging as the touchstones of a newer rationale for domestic violence legislation, which rightly has more to do with isolation and inequality than intimacy and equality (Helen Reece, 2006). However thorough study and analysis of the section 62 (3) of Part IV of Family law act 1996 is necessary to critically evaluate the role of associated ...Download file to see next pagesRead More
Share:
Tags
Cite this document
(“Critical analysis of the associated persons provisions of Part III of Essay - 1”, n.d.)
Critical analysis of the associated persons provisions of Part III of Essay - 1. Retrieved from https://studentshare.org/miscellaneous/1538305-critical-analysis-of-the-associated-persons-provisions-of-part-iii-of-the-family-law-act-1996-in-particular-section-s623

“Critical Analysis of the Associated Persons Provisions of Part III of Essay - 1”, n.d. https://studentshare.org/miscellaneous/1538305-critical-analysis-of-the-associated-persons-provisions-of-part-iii-of-the-family-law-act-1996-in-particular-section-s623.
Comments (0)
Click to create a comment or rate a document

CHECK THESE SAMPLES OF Critical analysis of the associated persons provisions of Part III of the Family Law Act 1996 (in particular section s.62(3))

Perhaps one of the most conspicuous aspects of CNN is that it has an excellent contact network and reporters on the spo...
8 Pages(2000 words)Case Study
sponsored ads
Save Your Time for More Important Things
Let us write or edit the essay on your topic "Critical analysis of the associated persons provisions of Part III of the Family Law Act 1996 (in particular section s.62(3))" with a personal 20% discount.
GRAB THE BEST PAPER

Let us find you another Essay on topic Critical analysis of the associated persons provisions of Part III of the Family Law Act 1996 (in particular section s.62(3)) for FREE!