Comments (0)
Add to wishlistDelete from wishlist
Cite this document
Summary
When two young law partners, Samuel Warren and Louis Brandeis, wrote a piece on ‘Right to Privacy’ in 1890,1 they wouldn’t have contemplated that they were setting in motion a process which would ultimately culminate in a whole new branch of law of torts and would…
Download full paperFile format: .doc, available for editing
HIDE THIS PAPERGRAB THE BEST PAPER96.9% of users find it useful 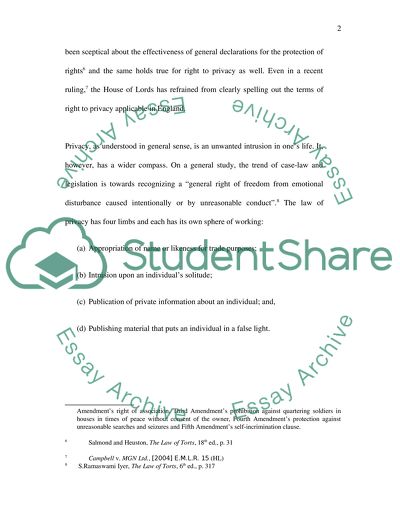 Download file to see previous pages a right of an individual to be protected against intrusion into his personal life or affairs, or those of his family, by direct physical means or by publication of information.
Privacy, as a tort, treaded upon difficult pathways to secure a respectable position. Even in America, it was not accepted as a tort even years after the 1890 article4 was written. It took a considerable period of time before the Supreme Court of USA actually accepted the concept.5 The English lawyers in UK have always been sceptical about the effectiveness of general declarations for the protection of rights6 and the same holds true for right to privacy as well. Even in a recent ruling,7 the House of Lords has refrained from clearly spelling out the terms of right to privacy applicable in England.
Privacy, as understood in general sense, is an unwanted intrusion in one’s life. It, however, has a wider compass. On a general study, the trend of case-law and legislation is towards recognizing a “general right of freedom from emotional disturbance caused intentionally or by unreasonable conduct”.8 The law of privacy has four limbs and each has its own sphere of working:
It is imperative to now understand the international position on Right to Privacy, a concept that has been elevated to a human right by a series of international human right treaties and covenants.UK is signatory to the International Covenant on Civil and Political Rights, 1966. Article 17 of the said Covenant reads as under:
2. There shall be no interference by a public authority with the exercise of this right except such as is in accordance with the law and is necessary in a democratic society in the interests of national security, public safety or the economic well-being of the country, for the prevention of disorder or crime, for the protection of health or morals, or for the protection of the rights and freedoms of others
It is in context of this small Article that the paper tries to discuss the changes in ...Download file to see next pagesRead More
Share:
Tags
Cite this document
(“Law: Civil Liberties and Human Rights Essay Example | Topics and Well Written Essays - 4500 words”, n.d.)
Retrieved from https://studentshare.org/miscellaneous/1538290-law-civil-liberties-and-human-rights

CHECK THESE SAMPLES OF Law: Civil Liberties and Human Rights

The painting...
7 Pages(1750 words)Coursework
sponsored ads
Save Your Time for More Important Things
Let us write or edit the essay on your topic "Law: Civil Liberties and Human Rights" with a personal 20% discount.
GRAB THE BEST PAPER

Let us find you another Essay on topic Law: Civil Liberties and Human Rights for FREE!