Comments (0)
Add to wishlistDelete from wishlist
Cite this document
Summary
Blasphemy can be described as the breach of the sentiments that hold closely a religion, group or community in its beliefs, traditions and basic lifestyle. Until the 1970s, the offence of blasphemy was found to be typically dismissed as archaism that existed at the margins of criminal law…
Download full paperFile format: .doc, available for editing
HIDE THIS PAPERGRAB THE BEST PAPER91% of users find it useful 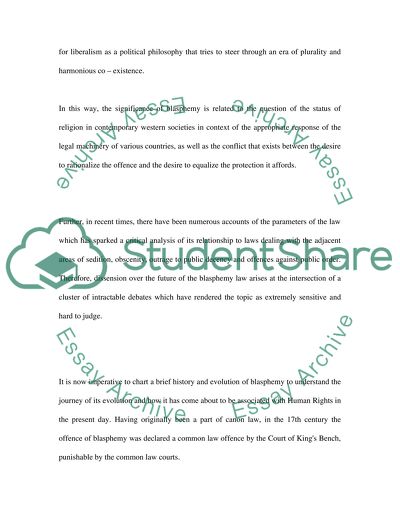 Download file to see previous pages At a point when legal developments have come to focus on the excitement created by renewed controversy, the social and cultural significance of the offence and the legal strategies have been questioned. In the course of this paper, I have attempted to examine the law of blasphemy in uncertainties surrounding the impact of secularization and cultural pluralism, which invest it with considerable symbolic consequence. This brings to the fore the recent revival of blasphemy laws through an assessment of the paradoxical nature of its effects, with particular emphasis on those difficulties that have been posed for liberalism as a political philosophy that tries to steer through an era of plurality and harmonious co - existence.
In this way, the significance of blasphemy is related to the question of the status of religion in contemporary western societies in context of the appropriate response of the legal machinery of various countries, as well as the conflict that exists between the desire to rationalize the offence and the desire to equalize the protection it affords.
Further, in recent times, there have been numerous accounts of the parameters of the law which has sparked a critical analysis of its relationship to laws dealing with the adjacent areas of sedition, obscenity, outrage to public decency and offences against public order. Therefore, dissension over the future of the blasphemy law arises at the intersection of a cluster of intractable debates which have rendered the topic as extremely sensitive and hard to judge.
It is now imperative to chart a brief history and evolution of blasphemy to understand the journey of its evolution and how it has come about to be associated with Human Rights in the present day. Having originally been a part of canon law, in the 17th century the offence of blasphemy was declared a common law offence by the Court of King's Bench, punishable by the common law courts.
From the 16th century to the mid-19th century, blasphemy against Christianity was held as an offence against common law, apart from being used a legal instrument to persecute atheists, Unitarians, and others.
All contumelious reproaches of Jesus Christ, all profane scoffing at the Holy Scriptures, and exposing any part thereof to contempt or ridicule, and finally all blasphemies against God, including denying His being or providence, were punishable by the temporal courts with fine, imprisonment, and corporal punishment. In 1656, the Quaker James Naylor suffered flogging, branding and the piercing of his tongue by a red-hot poker.
An act of Edward VI (repealed 1553 and revived 1558) set a punishment of imprisonment for reviling the sacrament of the Last Supper.
Further, it was in the 1676 case of Rex v Taylor, when the Lord Chief Justice Sir Matthew Hale stated that "Such kinds of blasphemous words were not only an offence to God and religion, but a crime against the laws, State and Government, and therefore punishable in that Court.... Christianity is parcel of the laws of England and therefore to reproach the Christian religion is to speak in subversion of the law." (www.google.com)
Those denying the Trinity were deprived of the benefit of the Act of Toleration by an act of 1688. Commonly called the Blasphemy Act, an act of 1697-1698, stated that if any person, educated in or having ...Download file to see next pagesRead More
Share:
Tags
Cite this document
(“Laws of Blasphemy and Human Rights Is there a modern connection Essay”, n.d.)
Laws of Blasphemy and Human Rights Is there a modern connection Essay. Retrieved from https://studentshare.org/miscellaneous/1506091-laws-of-blasphemy-and-human-rights-is-there-a-modern-connection

“Laws of Blasphemy and Human Rights Is There a Modern Connection Essay”, n.d. https://studentshare.org/miscellaneous/1506091-laws-of-blasphemy-and-human-rights-is-there-a-modern-connection.
Comments (0)
Click to create a comment or rate a document

Differing economic, cultural and political circumstances abroad also suggest the need for a better understanding of employees with a broad context is important. Fortunately, the ability to study the implications of policies on economic growth abroad is expanding rapidly as a result of the emergence of global private equity markets and micro finance. International entrepreneur ship spans cultural boundaries and involves a variety of stakeholders, including the entrepreneur, investors and policy makers (Asel, 2003). “Social considerations must be given the same status as economic, financial and environmental concerns in a holistic approach. It is time for global thinking and local action. The implementation of the Core Labour...
9 Pages(2250 words)Case Study

This work arrived at conclusions, by establishing the binding nature of the UDHR on the member states. The UDHR was rendered binding...
8 Pages(2000 words)Case Study

Although Aristotle outlines three requisite character traits that the tragic hero should possess, he qualifies the definition of the tragic hero with a set of events that must also take place before the hero can be considered truly tragic. Once this process is understood, it is easy to see how the sudden downfall of a mighty man, such as Oedipus the King from the play by Sophocles for example, would be dramatic and shocking to a public dominated by strict social classes. Moving into the more modern period, though, a subtle shift in the approach to tragedy began to take shape. The popular playwright William Shakespeare explored these concepts within his work as is demonstrated in plays such as Hamlet. In this play, the main charact...
9 Pages(2250 words)Essay
sponsored ads
Save Your Time for More Important Things
Let us write or edit the essay on your topic "Laws of Blasphemy and Human Rights Is there a modern connection" with a personal 20% discount.
GRAB THE BEST PAPER

Let us find you another Essay on topic Laws of Blasphemy and Human Rights Is there a modern connection for FREE!