Comments (0)
Add to wishlistDelete from wishlist
Cite this document
Summary
It was published in 1988 which is almost twenty years ago therefore a historical setting for the 80s must be kept in mind while…
Download full paperFile format: .doc, available for editing
HIDE THIS PAPERGRAB THE BEST PAPER95.8% of users find it useful 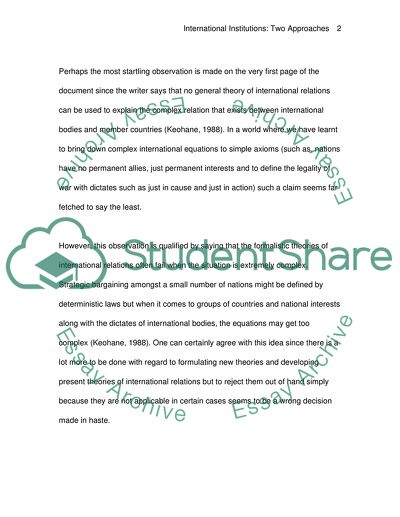 Download file to see previous pages The two approaches are given as the rationalistic approach and the reflective approach of which the rationalistic approach has had a long standing with the intellectual elite. However, the reflective approach is challenging this standing by focusing on subjectivity and pre-existing human conditions. At the same time, the supporters of the reflective approach have been unable to come to terms in creating a research methodology or a coherent viewpoint of their own although they have been successful in asking some very troubling questions for the supporters of the rationalistic approach (Keohane, 1988).
Perhaps the most startling observation is made on the very first page of the document since the writer says that no general theory of international relations can be used to explain the complex relation that exists between international bodies and member countries (Keohane, 1988). In a world where we have learnt to bring down complex international equations to simple axioms (such as, nations have no permanent allies, just permanent interests and to define the legality of war with dictates such as just in cause and just in action) such a claim seems far fetched to say the least.
However, this observation is qualified by saying that the formalistic theories of international relations often fail when the situation is extremely complex. Strategic bargaining amongst a small number of nations might be defined by deterministic laws but when it comes to groups of countries and national interests along with the dictates of international bodies, the equations may get too complex (Keohane, 1988). One can certainly agree with this idea since there is a lot more to be done with regard to formulating new theories and developing present theories of international relations but to reject them out of hand simply because they are not applicable in certain cases seems to be a wrong decision made in haste.
Keohane differentiates between the concepts of cooperation, harmony ...Download file to see next pagesRead More
Share:
Tags
Cite this document
(“Internatioal INstitutions: Two Approaches, Robert Keohane Essay”, n.d.)
Internatioal INstitutions: Two Approaches, Robert Keohane Essay. Retrieved from https://studentshare.org/miscellaneous/1538272-internatioal-institutions-two-approaches-robert-keohane

Erving Goffman was an astute observer of society, who immersed himself in the social environment which he was studying. He carefully observed and recorded the ways in which people’s behavior and interpersonal interactions are carried out in everyday life. He notes that “people perform their social roles and, as they do so, they produce social order through their actions and the regu...
6 Pages(1500 words)Article
sponsored ads
Save Your Time for More Important Things
Let us write or edit the essay on your topic "Internatioal INstitutions: Two Approaches, Robert Keohane" with a personal 20% discount.
GRAB THE BEST PAPER

Let us find you another Essay on topic Internatioal INstitutions: Two Approaches, Robert Keohane for FREE!