Comments (0)
Add to wishlistDelete from wishlist
Cite this document
Summary
The three main issues are the Black woman as a sexual object, the Black woman’s difficulty in self love, and the myth of the willing matriarchal Black woman.
Black women have been seen as…
Download full paperFile format: .doc, available for editing
HIDE THIS PAPERGRAB THE BEST PAPER96.6% of users find it useful 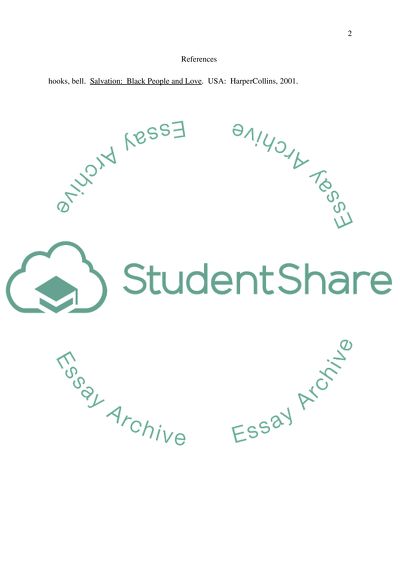 bell hooks presents several interesting insights about love and the Black female. The three main issues are the Black woman as a sexual object, the Black woman’s difficulty in self love, and the myth of the willing matriarchal Black woman.
Black women have been seen as temptresses since they were first brought as slaves to the American colony. Black women have been enslaved through rape, insults, and attacks from both the Black and White community long after slavery ended. Rapes were blamed on the Black woman because of society’s perception of them. Black womn who survived rape with any dignity was seen, “as superhuman, animalistic, and monstrous” (hooks 95). Even older Black women would turn on the victim, leading to the second issue in bell hooks book.
Self love for the Black woman is not easily achieved because of society’s perception of them. Society shows Black women as whores who have numerous children out of wedlock to stay on welfare. However evidence “countered racist and sexist stereotypes” about Black women on welfare, suggesting that it is lower than once reported (hooks 100). This leads to the third point.
The matriarchal position of the Black woman is not willing. The Black woman will work and take care of her family if her spouse or mate is not able to. Some Black men “lacked employment” due to no fault of their own, so their counterparts took up the slack (Hook 158). It was not a choice, but a necessity.
These issues have shown the Black woman in a different light.
References
hooks, bell. Salvation: Black People and Love. USA: HarperCollins, 2001. Read More
Share:
Tags
Cite this document
(“Salvation: Black People and Love By: Bell Hooks; Chapters 6,9: Mama Essay”, n.d.)
Retrieved from https://studentshare.org/miscellaneous/1538147-salvation-black-people-and-love-by-bell-hooks-chapters-69-mama-love-heterosexual-love

The ways in which the treatment of young offenders is differentiated from that of adult offenders are also presented using appropriate literature; particular reference is made to the role of Young Offender Institutions (YOI). It is proved that the current criminal justice for young offenders in the UK is not effective, despite the measures taken by the government for securing the rehabilitation of these individuals. On the other hand, the full alignment of the treatment of young offenders with that of the adult offenders, as this practice is in progress in the UK, will not resolve the problems related to the rehabilitation of young offenders. The alteration of the rules of the existing criminal justice system without eliminating t...
7 Pages(1750 words)Coursework
sponsored ads
Save Your Time for More Important Things
Let us write or edit the essay on your topic "Salvation: Black People and Love By: Bell Hooks; Chapters 6,9: Mama Love; Heterosexual Love" with a personal 20% discount.
GRAB THE BEST PAPER

Let us find you another Essay on topic Salvation: Black People and Love By: Bell Hooks; Chapters 6,9: Mama Love; Heterosexual Love for FREE!