The common law and equity systems of jurisprudence - Essay Example

Comments (0)
Add to wishlistDelete from wishlist
Cite this document
Summary
It developed out of the Chancery Courts of England where Chancellor was addressed to prevent injustices and enforce rights. 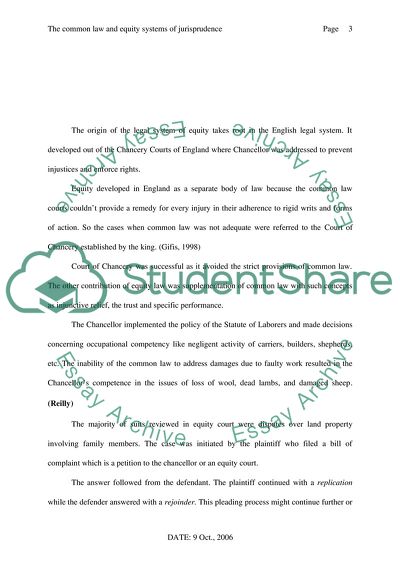 Extract of sample "The common law and equity systems of jurisprudence"

Download file to see previous pages The other contribution of equity law was supplementation of common law with such concepts as injunctive relief, the trust and specific performance.

The Chancellor implemented the policy of the Statute of Laborers and made decisions concerning occupational competency like negligent activity of carriers, builders, shepherds, etc. The inability of the common law to address damages due to faulty work resulted in the Chancellor’s competence in the issues of loss of wool, dead lambs, and damaged sheep. (Reilly)

The majority of suits reviewed in equity court were disputes over land property involving family members. The case was initiated by the plaintiff who filed a bill of complaint which is a petition to the chancellor or an equity court.

The answer followed from the defendant. The plaintiff continued with a replication while the defender answered with a rejoinder. This pleading process might continue further or may be finished a bill filing stage. In the equity court the main evidence was not an oral testimony but a written deposition based on interrogatories. (Wikipedia)

The Chancellor performed the roles of both a judge and jury. So he had the right to decide cases without a jury. Unlike the common law, the Chancellor as a judge and often as a religious person relied on circumstances of cases and his conscience but not to a set of rules.

Term "equitable claim" contains broad moral sense based upon general equitable considerations rather than a strict meaning of the claim involving consideration of principles of right and justice. (Equity)

“The Common Law and Equity Systems of Jurisprudence Essay”, n.d. https://studentshare.org/miscellaneous/1537834-the-common-law-and-equity-systems-of-jurisprudence.
Comments (0)
Click to create a comment or rate a document

The marketing strategy, especially for the university sector is both short term and long term. While a lot of universities carry out an active promotional and marketing campaign via relevant media as part of their short term marketing strategies, some of them rely wholly on the word of mouth and on the publicity gained by their students’ placements. In the long term marketing strategy of a university, the management has to decide upon the branding of the University for attracting future students. The concept of branding, and simultaneously creating a brand image and accruing brand equity, plays an important role in gaining competitive advantage. Creating a brand name for itself, any company or university can expect to have c...
63 Pages(15750 words)Research Proposal


7 Pages(1750 words)Case Study
sponsored ads
Save Your Time for More Important Things
Let us write or edit the essay on your topic "The common law and equity systems of jurisprudence" with a personal 20% discount.
GRAB THE BEST PAPER

Let us find you another Essay on topic The common law and equity systems of jurisprudence for FREE!