Comments (0)
Add to wishlistDelete from wishlist
Cite this document
Summary
In the pursue of its second mission which was “transferring knowledge, technology and experience through out General Motors”, the Saturn Corporation kept on manufacturing small cars whereas the parent company GM was having different plans, the era of 1990s ended…
Download full paperFile format: .doc, available for editing
HIDE THIS PAPERGRAB THE BEST PAPER96.1% of users find it useful 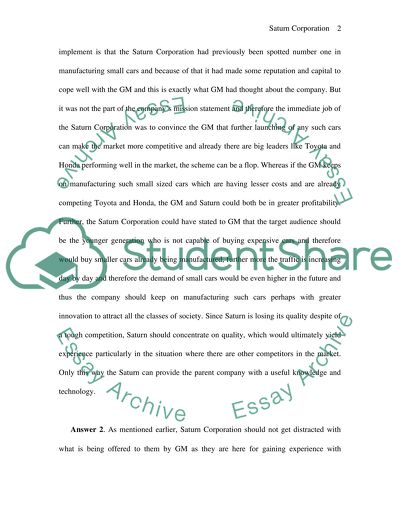 Download file to see previous pages When Saturn looks for parts suppliers for future vehicles, the Marketing and Product Planning team looks for companies that have not only the technology for today, but also have the depth in resources that will enable them to grow in technology and support. Saturn needs these suppliers to be a contributing part of the project development team. To help ensure effective involvement, Saturn enters into long-term, sometimes even lifetime contracts with selected suppliers. (Lenz, 1999, p. 53)
The Saturn Corporation had to be in complete contact with the GM, since the GM planned to launch the big cars and decided to have a shift from small to mid size cars, Saturn Corporation should have planned the similar and should have quit the idea of manufacturing the same old small cars. The reason that the strategy was not hard to implement is that the Saturn Corporation had previously been spotted number one in manufacturing small cars and because of that it had made some reputation and capital to cope well with the GM and this is exactly what GM had thought about the company. But it was not the part of the company’s mission statement and therefore the immediate job of the Saturn Corporation was to convince the GM that further launching of any such cars can make the market more competitive and already there are big leaders like Toyota and Honda performing well in the market, the scheme can be a flop. Whereas if the GM keeps on manufacturing such small sized cars which are having lesser costs and are already competing Toyota and Honda, the GM and Saturn could both be in greater profitability. Further, the Saturn Corporation could have stated to GM that the target audience should be the younger generation who is not capable of buying expensive cars and therefore would buy smaller cars already being manufactured, further more the traffic is increasing day by day and therefore the demand of small cars would be even higher in the future and thus the company should keep ...Download file to see next pagesRead More
Share:
Tags
Cite this document
(“Marketing - Saturn Corporation in 1998 Essay Example | Topics and Well Written Essays - 1000 words”, n.d.)
Marketing - Saturn Corporation in 1998 Essay Example | Topics and Well Written Essays - 1000 words. Retrieved from https://studentshare.org/miscellaneous/1537476-marketing-saturn-corporation-in-1998

CHECK THESE SAMPLES OF Marketing - Saturn Corporation in 1998

Marketing is a broad concept that includes all the activities regarding the target market, segmentation, positioning, product, price, promotion, and distribution. Marketing also includes the activities of selling the final products and providing after-sales services. Today marketing is done in various forms, but conceptually there are only two different forms of marketing, one is direct marketing and another one is indirect marketing. This report is all about direct marketing which is one of the oldest concepts of marketing. Since the present age is the age of information, it is quite expected that each and everything in business would be influenced by ‘information’. Direct marketing is not an exception. It is also inf...
6 Pages(1500 words)Coursework

All these benefits get reflected in the result of employee job satisfaction. In Starbucks, the Employee Job Satisfaction rate is 82% as per the report of Hewitt Associates Starbucks Partner V...
6 Pages(1500 words)Assignment
sponsored ads
Save Your Time for More Important Things
Let us write or edit the essay on your topic "Marketing - Saturn Corporation in 1998" with a personal 20% discount.
GRAB THE BEST PAPER

Let us find you another Essay on topic Marketing - Saturn Corporation in 1998 for FREE!