Comments (0)
Add to wishlistDelete from wishlist
Cite this document
Summary
Radical retail initiatives have shaken up the denim jeans market in the UK. The sales of jeans was 54% higher in 2004 as compared to 2000. While jeans are a casual wear in…
Download full paperFile format: .doc, available for editing
HIDE THIS PAPERGRAB THE BEST PAPER97.4% of users find it useful 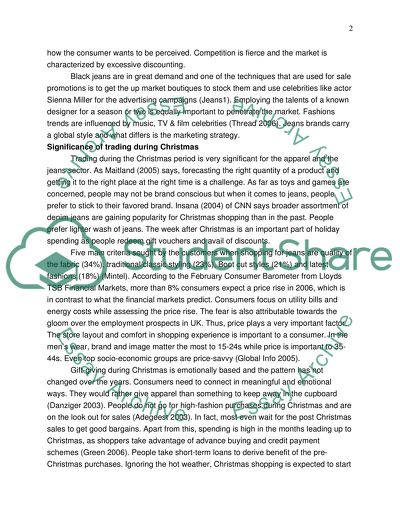 Extract of sample "Denim (Jeans) Market in the U.K"

Download file to see previous pages Consumers can now find jeans at £3 in many outlets including Tesco and Matalan. The supermarkets however, have shifted away from selling the discounted brands and concentrate on building their own labels. Prices in the mass market have fallen due to cheaper imports especially from China, and because other retail brands like Marks & Spencer, Next, and Burtons have reduced their prices. The premium brand jeans are struggling to justify their price tags against the own-label brands at £20-40. Jeans in the UK market are trying to differentiate themselves with cult connotations, lifestyle images, and distinctive details (Mintel 2005). At the same time, below-cost pricing methods by the super markets and their increasing presence in the convenience store sector have prompted government intervention (BBC 2006).
In the clothing industry and in the jeans industry in particular, several factors like innovation and new products have to be introduced frequently. Recently, when there was a shift from bootleg jeans to narrow skinny styles, sales went up remarkably high. This has caused the denim market to reach sales of $15.26 billion (£8.79 billion) in 2005, an increase of 9.3 percent from the year before (FashionUnited 2006). .At the same time, research suggests that brands continue to play an important role for the purchase of jeans (Jeans1 2006).
Standard clothing seems to the major market, with fashion wear taking only about 15% of all sales (Keynote n.d.). Standard women’s wear has the largest share and national players dominate these sectors while fashion clothing also have strong but regional chains. The growth in the recent years has been in the discount clothing market. Jeans are ageless and not outrageously youthful in design, which effectively means that men, women and children of all ages use it.
Consumers expect low prices, and increasing incomes are the key to increased economic activity. According to Jones and Hayes ...Download file to see next pagesRead More
Share:
Tags
Cite this document
(“Denim (Jeans) Market in the U.K Essay Example | Topics and Well Written Essays - 2500 words”, n.d.)
Denim (Jeans) Market in the U.K Essay Example | Topics and Well Written Essays - 2500 words. Retrieved from https://studentshare.org/miscellaneous/1537406-denim-jeans-market-in-the-uk

CHECK THESE SAMPLES OF Denim (Jeans) Market in the U.K

President Andrew Jackson led an example of an administration that set the stage for the way in which James Polk would lead. In 1817, as a still yet military leader, Jackson led the United States into the first of three conflicts with the Seminole Indians from which the acquisition of Florida from Spain would be negotiated and finalized. The situation with Spain was tenuous and should have been dealt with in a diplomatic and cautious manner, but in 1817 President Monroe wrote a letter to General Jackson stating that “Great interests...
8 Pages(2000 words)Article
sponsored ads
Save Your Time for More Important Things
Let us write or edit the essay on your topic "Denim (Jeans) Market in the U.K" with a personal 20% discount.
GRAB THE BEST PAPER

Let us find you another Essay on topic Denim (Jeans) Market in the U.K for FREE!