Comments (0)
Add to wishlistDelete from wishlist
Cite this document
Summary
From this brief overview it seems that the web is a better source for finding out information about how to give effective…
Download full paperFile format: .doc, available for editing
HIDE THIS PAPERGRAB THE BEST PAPER92.6% of users find it useful 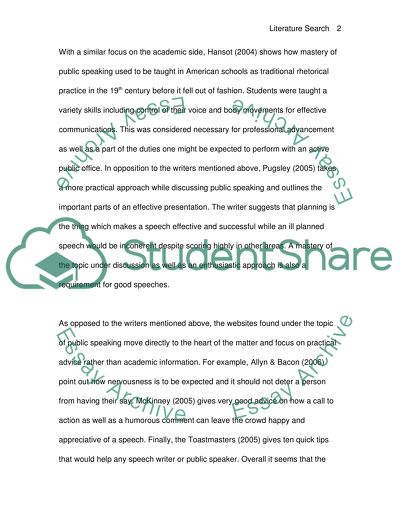 Literature Search The topic of public speaking is quite vast and locating material with relevant information is only a problem since relevancy has to be maintained. From this brief overview it seems that the web is a better source for finding out information about how to give effective presentations and be a good public speaker. On the other hand, the journals also provide good material but many of the journals contain historic or academic information about effective presentations and little practical information.
For example, Emanuel (2005) writes in the Community College Journal of Research & Practice that public speaking skills are necessary for success as a professional and he cites several studies and paper which show that people who are good at public speaking have an advantage in the business world as compared to people who are not good public speakers. The writer then goes on to suggest that elementary public speaking courses should be as broad based as possible since students might not be able to take more elective courses in communications.
With a similar focus on the academic side, Hansot (2004) shows how mastery of public speaking used to be taught in American schools as traditional rhetorical practice in the 19th century before it fell out of fashion. Students were taught a variety skills including control of their voice and body movements for effective communications. This was considered necessary for professional advancement as well as a part of the duties one might be expected to perform with an active public office. In opposition to the writers mentioned above, Pugsley (2005) takes a more practical approach while discussing public speaking and outlines the important parts of an effective presentation. The writer suggests that planning is the thing which makes a speech effective and successful while an ill planned speech would be incoherent despite scoring highly in other areas. A mastery of the topic under discussion as well as an enthusiastic approach is also a requirement for good speeches.
As opposed to the writers mentioned above, the websites found under the topic of public speaking move directly to the heart of the matter and focus on practical advice rather than academic information. For example, Allyn & Bacon (2006) point out how nervousness is to be expected and it should not deter a person from having their say. McKinney (2005) gives very good advice on how a call to action as well as a humorous comment can leave the crowd happy and appreciative of a speech. Finally, the Toastmasters (2005) gives ten quick tips that would help any speech writer or public speaker. Overall it seems that the information given online is far more practical than that which can be found in journals while the research information in journals is well cited with strong references which are not present in the websites.
Works Cited
Allyn, P. & Bacon, P. (2006). Expect and Accept Your Nervousness. Retrieved July 24, 2006 from Pearson Education, Inc. website: http://wps.ablongman.com/ab_public_speaking_2/0,9651,1593283-,00.html
Emanuel, R. (2005). The Case for Fundamentals of Oral Communication. Community College Journal of Research & Practice, 29(2), 153-162.
Hansot, E. (2004). Hearing Voices: Rhetoric, Imitation, and Civic Competence. Journal of Education. 185(2), 27-45.
McKinney, C. (2005). Public Speaking: How to Close a Speech. Retrieved July 24, 2006 from Public-Speaking.org website: http://www.public-speaking.org/public-speaking-closings-article.htm
Pugsley, L. (2005). How to give an effective presentation. Education for Primary Care. 16(5), 613-615.
Toastmasters. (2005). 10 Tips For Successful Public Speaking. Retrieved July 23, 2006 from Toastmasters International website: http://www.toastmasters.org/tips.asp
Word Count: 584 Read More
Share:
Tags
Cite this document
(“Literature Search Public Speaking Essay Example | Topics and Well Written Essays - 500 words”, n.d.)
Literature Search Public Speaking Essay Example | Topics and Well Written Essays - 500 words. Retrieved from https://studentshare.org/miscellaneous/1537337-literature-search-public-speaking

2. “The calm, deliberate composure with which he spoke of his late deeds and intentions, the expression of his fiendlike face when excited by enthusiasm, still bearing the stains of the blood...
9 Pages(2250 words)Assignment
sponsored ads
Save Your Time for More Important Things
Let us write or edit the essay on your topic "Literature Search Public Speaking" with a personal 20% discount.
GRAB THE BEST PAPER

Let us find you another Essay on topic Literature Search Public Speaking for FREE!