Comments (0)
Add to wishlistDelete from wishlist
Cite this document
Summary
She and her boyfriend seriously considered having an abortion. Her parents were not aware of her condition. I told her not to pursue it for fear of taking an unborn life. She said her boyfriend might leave her if she pursues…
Download full paperFile format: .doc, available for editing
HIDE THIS PAPERGRAB THE BEST PAPER91.2% of users find it useful 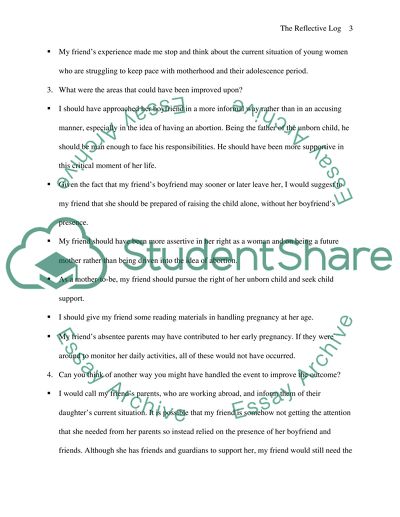 Download file to see previous pages Through my own prerogative, I was able to develop, implement and introduce troubleshooting strategies that made my friend re-consider taking an abortion. These strategies can also be used in other case scenarios.
I realised the value and need to equip myself with technical information and methodologies in handling more complex tasks like teenage pregnancy. Young people like me should be aware of such social work concepts to be able to analyse these social problems with young people who are experiencing such concern.
I should have approached her boyfriend in a more informal way rather than in an accusing manner, especially in the idea of having an abortion. Being the father of the unborn child, he should be man enough to face his responsibilities. He should have been more supportive in this critical moment of her life.
I would call my friend’s parents, who are working abroad, and inform them of their daughter’s current situation. It is possible that my friend is somehow not getting the attention that she needed from her parents so instead relied on the presence of her boyfriend and friends. Although she has friends and guardians to support her, my friend would still need the support of her parents that would assure her that despite what happened they still love and would take care of her and her unborn child.
There is a need to have a community-based institution or “teenage clinic” that could handle the growing need number of local teenage pregnancy. A school nurse, health visitor or youth worker might be able to help give ideas for setting up the clinic. Young people like me should be encouraged and involved in this kind of social work endeavour.
There is a need to increase the youth’s awareness on teenage pregnancy. Schools, healthcare institutions and the local government should educate adolescents the effects of teenage pregnancy, means to which it can be avoided and how this issue can be disseminated.
Five years ago, my neighbourhood ...Download file to see next pagesRead More
Share:
Tags
Cite this document
(“Reflective Log in Social Work Practice (FOUR Reflective Logs 750 Words Essay”, n.d.)
Retrieved from https://studentshare.org/miscellaneous/1537288-reflective-log-in-social-work-practice-four-reflective-logs-750-words-each

We need to make sure that we are doing the right things, in the right way, at the right time for the right people in an open, honest, and accountable manner (Ref).
The benefits of the partnership working have been the focus of many public, private, voluntary, and community organizations. The Council has in the past, played a leading role in establishing and developing partnerships. A range of issues has been identified to address and to ensure that the Council has a consistent and rigorous approach to partnership working so that we are able to obtain full benefits. Clear processes and procedures are necessary to enable us to deliver the services to our service users efficiently, effectively, and properly with our p...
10 Pages(2500 words)Essay

... within the limits of authority and responsibility and (c) team work must be encouraged. These aspects would be relevant within the context of early childhood education, because when the contribution of these employees is appreciated and they are treated well, they are likely to respond favourably by demonstrating higher levels of motivation. By working in teams, they will be able to share their frustrations and problems with other employees and this would be very helpful to them in coping with their problems. They are likely to gain insight from each other, as they discuss the different ways in which they have solved the problems they come up with in the workplace. One of the most important functions a manager has is to motivate...
6 Pages(1500 words)Coursework

Soon a retail industry was built up and the community began to grow and is considered to be a society with a civic nature (Learning Communities in Education and Training, 2009). The community of Broken Hill can be considered to be highly diverse with a census that was conducted in the area in 1996 showed that out of the then population there were 961 people who came from overseas and a large amount of those was not from an English speaking nation. The large composition of the population in the community at the time was aboriginals or Torres Strait Islanders. Broken Hill thus shows a varying ethnic community and a diverse mindset considering a large proportion of the people are from nations such as Greece, Malta and even Italy (Lea...
6 Pages(1500 words)Case Study
sponsored ads
Save Your Time for More Important Things
Let us write or edit the essay on your topic "Reflective Log in Social Work Practice (FOUR Reflective Logs 750 Words Each)" with a personal 20% discount.
GRAB THE BEST PAPER