Comments (0)
Add to wishlistDelete from wishlist
Cite this document
Summary
The required information is obtained from the defendant, family members of the defendant, and any other individuals that have had an important role to play in the background of the…
Download full paperFile format: .doc, available for editing
HIDE THIS PAPERGRAB THE BEST PAPER93.6% of users find it useful 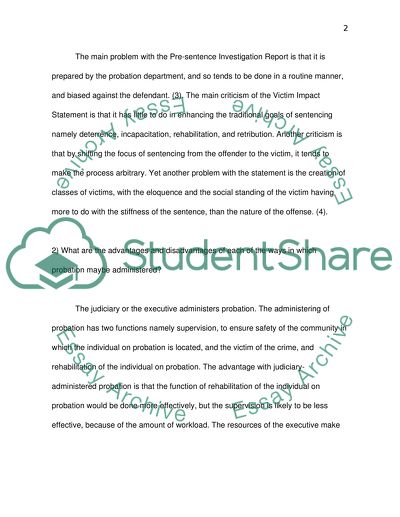 Download file to see previous pages (1)
The Victim Impact Statement provides the details of the harm or loss caused to the victim as a result of the offence, and the court takes this statement into consideration at the time of sentencing the offender. The purpose of the statement is to provide the victims of crime an opportunity to be heard in the criminal justice system, by participating in the sentencing of the offender in providing to the court and the offender, the impact of the crime on them. (2)
The main problem with the Pre-sentence Investigation Report is that it is prepared by the probation department, and so tends to be done in a routine manner, and biased against the defendant. (3). The main criticism of the Victim Impact Statement is that it has little to do in enhancing the traditional goals of sentencing namely deterrence, incapacitation, rehabilitation, and retribution. Another criticism is that by shifting the focus of sentencing from the offender to the victim, it tends to make the process arbitrary. Yet another problem with the statement is the creation of classes of victims, with the eloquence and the social standing of the victim having more to do with the stiffness of the sentence, than the nature of the offense. (4).
The judiciary or the executive administers probation. The administering of probation has two functions namely supervision, to ensure safety of the community in which the individual on probation is located, and the victim of the crime, and rehabilitation of the individual on probation. The advantage with judiciary-administered probation is that the function of rehabilitation of the individual on probation would be done more effectively, but the supervision is likely to be less effective, because of the amount of workload. The resources of the executive make supervision more effectively undertaken, but the rehabilitation is likely to be affected due to lesser concern for it. (5)
The administering of probation at the ...Download file to see next pagesRead More
Share:
Tags
Cite this document
(“Individual Project Essay Example | Topics and Well Written Essays - 750 words”, n.d.)
Individual Project Essay Example | Topics and Well Written Essays - 750 words. Retrieved from https://studentshare.org/miscellaneous/1537265-individual-project

CHECK THESE SAMPLES OF Individual Project

Civil Aviation Administration of China (CAAC) – undoubtedly advanc...
7 Pages(1750 words)Assignment
sponsored ads
Save Your Time for More Important Things
Let us write or edit the essay on your topic "Individual Project" with a personal 20% discount.
GRAB THE BEST PAPER

Let us find you another Essay on topic Individual Project for FREE!