Comments (0)
Add to wishlistDelete from wishlist
Cite this document
Summary
Media impacts the lives of millions of people everyday, from what is on television, to magazines, to the sides of buses! One of the greatest impacts on American society is on body image. Women learn to be thin, and to never forget their make-up, while men…
Download full paperFile format: .doc, available for editing
HIDE THIS PAPERGRAB THE BEST PAPER92.9% of users find it useful 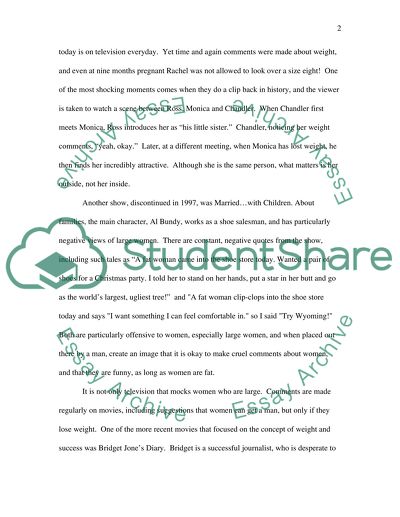 Extract of sample "Media portrayal of plus size women causes young men to believe that overweight women are lazy, unattractive, and ignorant"

Download file to see previous pages I immediately drop the magazine and start doing sit-ups. Can you blame me?” (Maine 90) This woman is not alone. These images do more damage then many people understand. Women who wear large sizes are judged based on their body, not on other attributes. It does not matter how smart, or how funny they are, what kind of person they are, or even how beautiful their face is. What counts is their size, and they will constantly be judged by that. Often the most painful judgment comes from men; they scorn, they catcall, and they chose to ignore women who do not meet the beauty standard. It is through the media, men learn that women must meet the ideal, or they are not valuable. By looking critically at two media forums, television, and magazines, it is clear that the impact media has on men’s understanding of female beauty and value is directly linked to the false image media has imposed upon society.
On of the best loved shows on television has had one of the strongest impacts on men’s understanding of beauty. For ten seasons Friends was adored by fans, and still today is on television everyday. Yet time and again comments were made about weight, and even at nine months pregnant Rachel was not allowed to look over a size eight! One of the most shocking moments comes when they do a clip back in history, and the viewer is taken to watch a scene between Ross, Monica and Chandler. When Chandler first meets Monica, Ross introduces her as “his little sister.” Chandler, noticing her weight comments, “yeah, okay.” Later, at a different meeting, when Monica has lost weight, he then finds her incredibly attractive. Although she is the same person, what matters is her outside, not her inside.
Another show, discontinued in 1997, was Married…with Children. About families, the main character, Al Bundy, works as a shoe salesman, and has particularly negative views of large women. There are constant, negative quotes from the show, ...Download file to see next pagesRead More
Share:
Tags
Cite this document
(“Media portrayal of plus size women causes young men to believe that Essay”, n.d.)
Media portrayal of plus size women causes young men to believe that Essay. Retrieved from https://studentshare.org/miscellaneous/1536952-media-portrayal-of-plus-size-women-causes-young-men-to-believe-that-overweight-women-are-lazy-unattractive-and-ignorant

CHECK THESE SAMPLES OF Media portrayal of plus size women causes young men to believe that overweight women are lazy, unattractive, and ignorant

It has done an incredible amount to increase business productivity and trade and make many people richer. One of the founding economic theorists of globalization is David Ricardo who focused on distributing income among landowners and workers. He also had a lot to say about wages and prices. One of his big contributions was the idea of comparative advantage which involves countries with different advantages trading with one another in free markets so that both maximize their benefits. This underpins much contemporary globalization and trade theory.
One of the great accomplishments of the globalization process that began to speed up in the 1990s is the development of a number of second-tier, successful economies in the develop...
6 Pages(1500 words)Assignment
sponsored ads
Save Your Time for More Important Things
Let us write or edit the essay on your topic "Media portrayal of plus size women causes young men to believe that overweight women are lazy, unattractive, and ignorant" with a personal 20% discount.
GRAB THE BEST PAPER

Let us find you another Essay on topic Media portrayal of plus size women causes young men to believe that overweight women are lazy, unattractive, and ignorant for FREE!