Comments (1)
Add to wishlistDelete from wishlist
Cite this document
Summary
All transitions have their moments of difficulty and their particular crises, but no period is so complicated and so confusing for individuals as adolescence. They are no longer…
Download full paperFile format: .doc, available for editing
HIDE THIS PAPERGRAB THE BEST PAPER96.2% of users find it useful 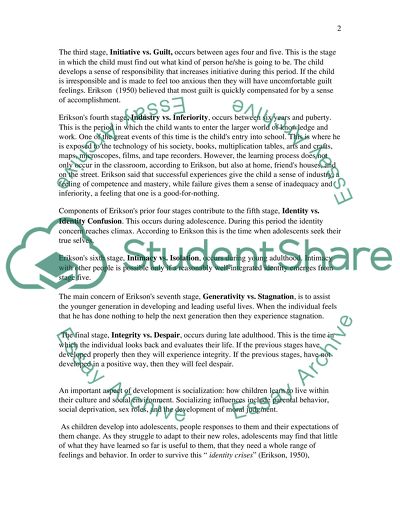 Download file to see previous pages Erikson developed eight psychosocial stages that humans encounter throughout their life.
The first stage, Trust vs. Mistrust, occurs from approximately birth to one year. Erikson (1950) defined trust as an essential trustfulness of others as well as a fundamental sense of ones own trustworthiness. He thought that an infant who gets fed when he is hungry and comforted when he needs comforting will develop trust. He also said that some mistrust is necessary to learn to discriminate between honest and dishonest persons. If mistrust wins over trust in this stage, the child will be frustrated, withdrawn, suspicious, and will lack self-confidence.
The second stage, Autonomy vs. Shame & Doubt, occurs between ages two and three. During this period it is important that the parents create a supportive atmosphere in which the child can develop a sense of self-control without a loss of self-esteem. Shame and doubt about the childs self-control and independence occur if basic trust was insufficiently developed or was lost such as when the childs will is broken by an over controlling parent. In this stage, Erikson said the child encounters rules, such as which areas of the house he is allowed to explore.
The third stage, Initiative vs. Guilt, occurs between ages four and five. This is the stage in which the child must find out what kind of person he/she is going to be. The child develops a sense of responsibility that increases initiative during this period. If the child is irresponsible and is made to feel too anxious then they will have uncomfortable guilt feelings. Erikson (1950) believed that most guilt is quickly compensated for by a sense of accomplishment.
Eriksons fourth stage, Industry vs. Inferiority, occurs between six years and puberty. This is the period in which the child wants to enter the larger world of knowledge and work. One of the great events of this ...Download file to see next pagesRead More
Share:
Tags
Cite this document
(“Counselling young people Essay Example | Topics and Well Written Essays - 2500 words”, n.d.)
Counselling young people Essay Example | Topics and Well Written Essays - 2500 words. Retrieved from https://studentshare.org/miscellaneous/1536884-counselling-young-people

ca
camden72 added comment 3 months ago
Student rated this paper as
I never thought 2500 words essay could be written in such a free manner. I loved the background of this essay. Will definitely use it for my own work!

The ways in which the treatment of young offenders is differentiated from that of adult offenders are also presented using appropriate literature; particular reference is made to the role of Young Offender Institutions (YOI). It is proved that the current criminal justice for young offenders in the UK is not effective, despite the measures taken by the government for securing the rehabilitation of these individuals. On the other hand, the full alignment of the treatment of young offenders with that of the adult offenders, as this practice is in progress in the UK, will not resolve the problems related to the rehabilitation of young offenders. The alteration of the rules of the existing criminal justice system without eliminating t...
7 Pages(1750 words)Coursework
sponsored ads
Save Your Time for More Important Things
Let us write or edit the essay on your topic "Counselling young people" with a personal 20% discount.
GRAB THE BEST PAPER

Let us find you another Essay on topic Counselling young people for FREE!