Comments (0)
Add to wishlistDelete from wishlist
Cite this document
Summary
However, this also connotes the period from 1603 to 1868 when the shoguns, Japan’s military leaders, were ruling the country. This was also known as the period of Tokugawa, the name carried by the shoguns. When Ieyasu, the founder…
Download full paperFile format: .doc, available for editing
HIDE THIS PAPERGRAB THE BEST PAPER93.9% of users find it useful 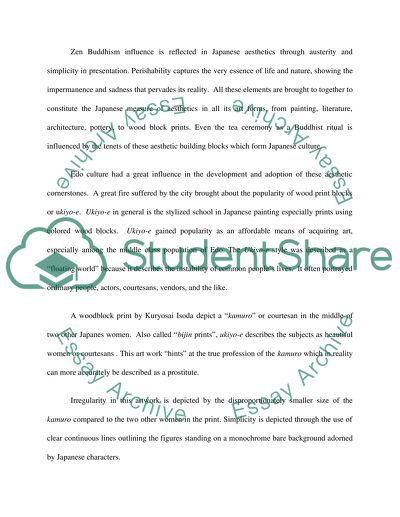 Download file to see previous pages Edo culture saw the living side by side of both the rich and poor in Japanese society. This gave rise to a different point view in interpreting nature which with the combination of the principles taught in Zen Buddhism gave rise to the aesthetic values which characterized Japanese art. These values of suggestion, irregularity, simplicity and perishability, as Donald Keene identified them.
Suggestion or yugen is the characteristic wherein the artist suggests a hint of nature. There is no idealization of the subject but connotes a suggestion of what it is in relation to what it truly is. The artwork gives an indication of reality and does not capture the subject in its real form.
Zen Buddhism influence is reflected in Japanese aesthetics through austerity and simplicity in presentation. Perishability captures the very essence of life and nature, showing the impermanence and sadness that pervades its reality. All these elements are brought to together to constitute the Japanese measure of aesthetics in all its art forms, from painting, literature, architecture, pottery, to wood block prints. Even the tea ceremony as a Buddhist ritual is influenced by the tenets of these aesthetic building blocks which form Japanese culture.
Edo culture had a great influence in the development and adoption of these aesthetic cornerstones. A great fire suffered by the city brought about the popularity of wood print blocks or ukiyo-e. Ukiyo-e in general is the stylized school in Japanese painting especially prints using colored wood blocks. Ukiyo-e gained popularity as an affordable means of acquiring art, especially among the middle class population of Edo. The Ukiyo-e style was described as a “floating world” because it describes the instability of common people’s lives. It often portrayed ordinary people, actors, courtesans, vendors, and the like.
A woodblock print by Kuryosai Isoda depict a “kamuro” or courtesan in the middle of two other ...Download file to see next pagesRead More
Share:
Tags
Cite this document
(“How was picture production affected by the rise of the city of Edo Essay”, n.d.)
How was picture production affected by the rise of the city of Edo Essay. Retrieved from https://studentshare.org/miscellaneous/1536686-how-was-picture-production-affected-by-the-rise-of-the-city-of-edo

“How Was Picture Production Affected by the Rise of the City of Edo Essay”, n.d. https://studentshare.org/miscellaneous/1536686-how-was-picture-production-affected-by-the-rise-of-the-city-of-edo.
Comments (0)
Click to create a comment or rate a document

Given the emergent nature of online commerce, it is a tough task for retailers to develop a website that meets all expectations from consumers. This view is supported by a survey conducted by the UK’s largest e-consultancy Cap Gemini. The survey identified several key disadvantages for online shoppers. Some of these include “’ Availability’, ‘Can’t be in to receive delivery’, ‘Premium charged for delivery’, ‘Can’t see or feel the merchandise’, etc.” (Quader & Quader, 2008) These are not trivial complaints by any means and despite the e-retailing industry setting foot into its third decade in existence, there are no satisfactory solutions found for th...
6 Pages(1500 words)Literature review
sponsored ads
Save Your Time for More Important Things
Let us write or edit the essay on your topic "How was picture production affected by the rise of the city of Edo" with a personal 20% discount.
GRAB THE BEST PAPER

Let us find you another Essay on topic How was picture production affected by the rise of the city of Edo for FREE!