Comments (0)
Add to wishlistDelete from wishlist
Cite this document
Summary
Globalisation has made the world much smaller than what it used to be and the managers of today are often placed in companies which have offices and distributed teams in different countries. With the emergence of China a manufacturing powerhouse and India as a technology centred…
Download full paperFile format: .doc, available for editing
HIDE THIS PAPERGRAB THE BEST PAPER91.6% of users find it useful 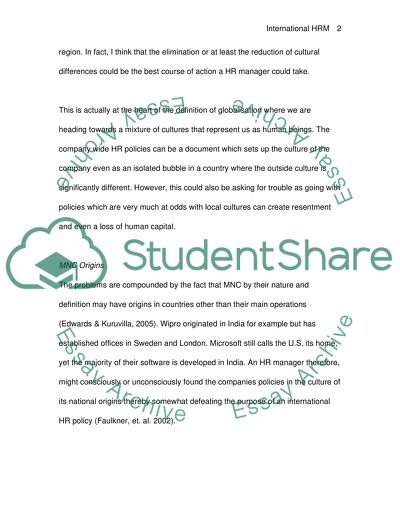 Download file to see previous pages an now be called on to create company wide policies which affect the people working in London as much as they affect employees working in other parts of the globe.
Implementing a global policy is never an easy task since the HR manager who is assigned to the job may have to balance several cultural, national and business systems related issues. Cultural differences are probably the widest set of problems since the phrase is used as a generic term for all the differences which people may have in their workplaces from country to country and region to region. In fact, I think that the elimination or at least the reduction of cultural differences could be the best course of action a HR manager could take.
This is actually at the heart of the definition of globalisation where we are heading towards a mixture of cultures that represent us as human beings. The company wide HR policies can be a document which sets up the culture of the company even as an isolated bubble in a country where the outside culture is significantly different. However, this could also be asking for trouble as going with policies which are very much at odds with local cultures can create resentment and even a loss of human capital.
The problems are compounded by the fact that MNC by their nature and definition may have origins in countries other than their main operations (Edwards & Kuruvilla, 2005). Wipro originated in India for example but has established offices in Sweden and London. Microsoft still calls the U.S. its home, yet the majority of their software is developed in India. An HR manager therefore, might consciously or unconsciously found the companies policies in the culture of its national origins thereby somewhat defeating the purpose of an international HR policy (Faulkner, et. al. 2002).
To carry over the same style of HR management between countries with vastly different business cultures is very difficult. The situation which comes about in these cases is that important ...Download file to see next pagesRead More
Share:
Tags
Cite this document
(“INTERNATIONAL HRM Essay Example | Topics and Well Written Essays - 2500 words”, n.d.)
INTERNATIONAL HRM Essay Example | Topics and Well Written Essays - 2500 words. Retrieved from https://studentshare.org/miscellaneous/1536313-international-hrm

CHECK THESE SAMPLES OF INTERNATIONAL HRM

Civil Aviation Administration of China (CAAC) – undoubtedly advanc...
7 Pages(1750 words)Assignment
sponsored ads
Save Your Time for More Important Things
Let us write or edit the essay on your topic "INTERNATIONAL HRM" with a personal 20% discount.
GRAB THE BEST PAPER

Let us find you another Essay on topic INTERNATIONAL HRM for FREE!