Comments (0)
Add to wishlistDelete from wishlist
Cite this document
Summary
The aggregate of political, economical, territorial, legal, ideological and cultural relationship between nations, national groups and peoples appear in different forms of social-economical formations. Every culture reflects only the part of experience that was gained by people…
Download full paperFile format: .doc, available for editing
HIDE THIS PAPERGRAB THE BEST PAPER96.4% of users find it useful 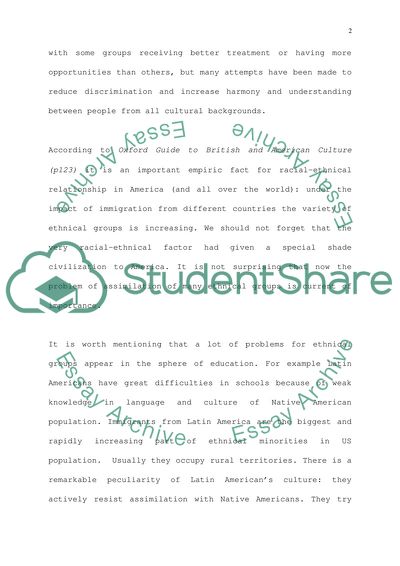 Download file to see previous pages It is natural that the representatives of one ethnical groups can have different types of character. Usually the peculiarities of ethnical groups are based on religious views. Though many forms of behavior have the cultural roots.
The terms mainstream and ethnic minority point out and reinforce division in society, whereas the phrase multicultural society suggests that the different groups are a part of a whole. In every country society is still divided, with some groups receiving better treatment or having more opportunities than others, but many attempts have been made to reduce discrimination and increase harmony and understanding between people from all cultural backgrounds.
According to Oxford Guide to British and American Culture (p123) it is an important empiric fact for racial-ethnical relationship in America (and all over the world): under the impact of immigration from different countries the variety of ethnical groups is increasing. We should not forget that the very racial-ethnical factor had given a special shade civilization to America. It is not surprising that now the problem of assimilation of many ethnical groups is current of importance.
It is worth mentioning that a lot of problems for ethnical groups appear in the sphere of education. For example Latin Americans have great difficulties in schools because of weak knowledge in language and culture of Native American population. Immigrants from Latin America are the biggest and rapidly increasing part of ethnical minorities in US population. Usually they occupy rural territories. There is a remarkable peculiarity of Latin American’s culture: they actively resist assimilation with Native Americans. They try to preserve their national identity, mostly they speak Spanish and as a rule they live in their limited communities.
L.S. Luedtke (1987, P.64) outlines that “the life of Native Americans was very difficult ...Download file to see next pagesRead More
Share:
Tags
Cite this document
(“Native Americans culture vs. Latin Americans culture Essay”, n.d.)
Native Americans culture vs. Latin Americans culture Essay. Retrieved from https://studentshare.org/miscellaneous/1536031-native-americans-culture-vs-latin-americans-culture