Comments (0)
Add to wishlistDelete from wishlist
Cite this document
Summary
They are the offer, the acceptance, the object of the contract, the consideration, the legality of the subject matter, the contractual capacity of the parties involved, and the contractual…
Download full paperFile format: .doc, available for editing
HIDE THIS PAPERGRAB THE BEST PAPER93.7% of users find it useful 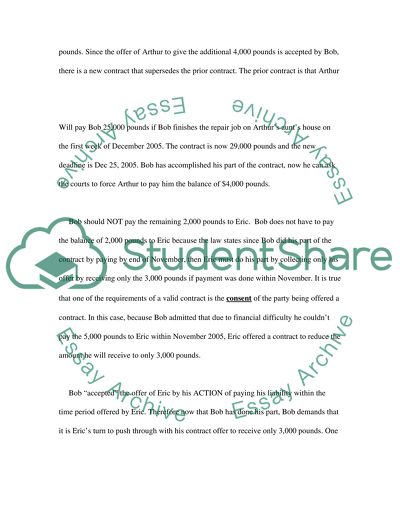 Download file to see previous pages The courts will decide on the amount of damages and other penalties that the defendant will have to incur in return for the breach of contract.
Bob’s remedy is to exhaust all extra judicial means to collect the remaining 4,000 pounds that was offered by Arthur and accepted by Bob. If the extra judicial means are not successful, then Bob can file civil charges for the collection of the remaining 4,000 pounds. Since the offer of Arthur to give the additional 4,000 pounds is accepted by Bob, there is a new contract that supersedes the prior contract. The prior contract is that Arthur
Will pay Bob 25,000 pounds if Bob finishes the repair job on Arthur’s aunt’s house on the first week of December 2005. The contract is now 29,000 pounds and the new deadline is Dec 25, 2005. Bob has accomplished his part of the contract, now he can ask the courts to force Arthur to pay him the balance of $4,000 pounds.
Bob should NOT pay the remaining 2,000 pounds to Eric. Bob does not have to pay the balance of 2,000 pounds to Eric because the law states since Bob did his part of the contract by paying by end of November, then Eric must do his part by collecting only his offer by receiving only the 3,000 pounds if payment was done within November. It is true that one of the requirements of a valid contract is the consent of the party being offered a contract. In this case, because Bob admitted that due to financial difficulty he couldn’t pay the 5,000 pounds to Eric within November 2005, Eric offered a contract to reduce the amount he will receive to only 3,000 pounds.
Bob “accepted” the offer of Eric by his ACTION of paying his liability within the time period offered by Eric. Therefore now that Bob has done his part, Bob demands that it is Eric’s turn to push through with his contract offer to receive only 3,000 pounds. One reason for Bob’s paying on time is because of ...Download file to see next pagesRead More
Share:
Tags
Cite this document
(“Contract law Essay Example | Topics and Well Written Essays - 1500 words - 2”, n.d.)
Contract law Essay Example | Topics and Well Written Essays - 1500 words - 2. Retrieved from https://studentshare.org/miscellaneous/1535887-contract-law

..., but the contract Administrator CU Architects has vaguely talked about the fact that there could be circumstances for extensions of time for: After giving careful considerations about the points raised by you over the phone on various issues of the project, I wish to bring to your kind attention the following legal provisions under JCT contract provisions. 1. Inclement weather A contractor’s privilege to avail an extension of time due to concurrent delays can be found in (Henery Boot vs Malmaison 1. In this case, Mr. Justice Dyson in 1999 cited an illustration in a work site where standstill of work was caused due to labor shortages, which was not a relevant event especially during phases of extraordinarily inclement weather...
13 Pages(3250 words)Essay

Some of the more important rights bestowed upon employees by the employment law are the right to claim wrongful or unfair dismissal and payment for redundancy. Other legislation, such as the health and safety statute and the insolve...
7 Pages(1750 words)Case Study
sponsored ads
Save Your Time for More Important Things
Let us write or edit the essay on your topic "Contract law" with a personal 20% discount.
GRAB THE BEST PAPER

Let us find you another Essay on topic Contract law for FREE!