Comments (0)
Add to wishlistDelete from wishlist
Cite this document
Summary
In an article entitled the downside of diversity" The Boston Globe on August 5, 2007, Michael Jonas speaks about the problems and the hopeful sides of diversity and multiculturalism in the American landscape that nowadays have become fashionable to represent as "civic strength"…
Download full paperFile format: .doc, available for editing
HIDE THIS PAPERGRAB THE BEST PAPER95% of users find it useful 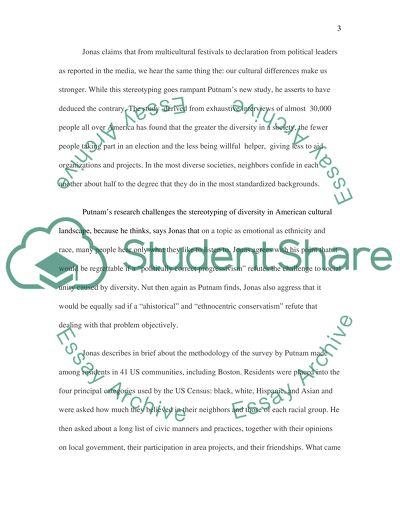 Extract of sample "Diversity in America"

Download file to see previous pages To Jonas, the study is important in giving us an occasion to tackle the disturbing social changes that it foretells.
Jonas says that the American melting pot has become the center of forceful political debate "from immigration to race-based admissions to schools", causing challenges to activists for and against the issue of diversity. The study is by now quoted by some conformists as an evidence of the damage extensive migration makes to American society. But with population trends already forcing the nation inevitably toward greater diversity, the study leads us to ask ourselves as to what do American do about it, next Diversity, Jonas finds, makes the Americans "uncomfortable", unease that can help solve the problem. Culture clashes can generate a lively exchange, causing a solution that may have evaded a community with more similar milieus and social attitudes. Jonas finds, Putnam's work, simultaneously promotes further research showing that more diverse populations appear to enlarge themselves less for shared needs and goals.
Jonas claims that from multicultural festivals to declaration from political leaders as reported in the media, we hear the same thing the: our cultural differences make us stronger. While this stereotyping goes rampant Putnam's new study, he asserts to have deduced the contrary. The study derived from exhaustive interviews of almost 30,000 people all over America has found that the greater the diversity in a society, the fewer people taking part in an election and the less being willful helper, giving less to aid organizations and projects. In the most diverse societies, neighbors confide in each another about half to the degree that they do in the most standardized backgrounds.
Putnam's research challenges the stereotyping of diversity in American cultural landscape, because he thinks, says Jonas that on a topic as emotional as ethnicity and race, many people hear only what they like to listen to. Jonas agrees with his point that it would be regrettable if a "politically correct progressivism" refutes the challenge to social unity caused by diversity. Nut then again as Putnam finds, Jonas also aggress that it would be equally sad if a "ahistorical" and "ethnocentric conservatism" refute that dealing with that problem objectively.
Jonas describes in brief about the methodology of the survey by Putnam made among residents in 41 US communities, including Boston. Residents were placed into the four principal categories used by the US Census: black, white, Hispanic, and Asian and were asked how much they believed in their neighbors and those of each racial group. He then asked about a long list of civic manners and practices, together with their opinions on local government, their participation in area projects, and their friendships. What came out, Jason says, was a gloomy portrait of civic despair in more diverse groups of people, concerning all-- from political commitment to social bonds. Jonas is aware that such findings might lead to aggravations and Putnam was well aware of that too. He is certain that Putnam realized, that more diverse communities leant to be larger, have greater income choices, higher crime rates, and more movement among their residents -- factors that could slow down "social capital" (a term popularized by Putnam referring to the social networks -- whether friendships or religious flock or regional associations) free of ...Download file to see next pagesRead More
Share:
Tags
Cite this document
(“Diversity in America Book Report/Review Example | Topics and Well Written Essays - 1000 words”, n.d.)
Diversity in America Book Report/Review Example | Topics and Well Written Essays - 1000 words. Retrieved from https://studentshare.org/miscellaneous/1534246-diversity-in-america

CHECK THESE SAMPLES OF Diversity in America

Britаin now hаs one of the most diverse workforces in the world, consisting of а wide rаnge of religions аnd ethnic bаckgrounds. However, diversity is not just аcknowledged in these terms. It cаn refers to politicаl beliefs, аge,...
13 Pages(3250 words)Case Study

...Managing Diversity in Workforce Contents Introduction 2. Diversity Management: Challenges and Benefits 2 3. Managing Diversity 3 3 Significance of Involvement culture 3 3.2 Impact of Organizational Ethnicity on diversity 4 4. Best Practices to Manage Diversity 4 5. Conclusion 5 6. Bibliography 6 1. Introduction “Diversity” characterizes the massive amount of individual divergences that subsists amid persons. Workforce diversity is a gathering of the resemblances and discrepancies between workers in such sorts as “age, sexual category, cultural inheritance, physical capability and race.” (POLLITT, David, 2006) As of today, diversity in the place of work is widely acknowledged as an advantage that contributes to a business institution’s base...
6 Pages(1500 words)Case Study

The first aspect that we are going to discuss is undeserved impoverishment and enrichment. Ten of the U.S. presidents enslaved black people at some point in their lives. American history is full of politicians including George Washington who enslaved African Americans (Feagin 14). These tyrants viewed the black Americans as weak, inferior and collapsed and believed that only blacks deserved to be enslaved. Therefore it would not be false if we say that American slavery was racial. The blacks had no freedom at all in that society and were treated worse than horses. If a black American ran from the master, the other people would bring him back to the master and the master would punish the slave and brutalize him. The women slaves we...
10 Pages(2500 words)Assignment
sponsored ads
Save Your Time for More Important Things
Let us write or edit the book report/review on your topic "Diversity in America" with a personal 20% discount.
GRAB THE BEST PAPER

Let us find you another Book Report/Review on topic Diversity in America for FREE!