The Processes of Globalization and Culture in Cape Town - Essay Example

Comments (0)
Add to wishlistDelete from wishlist
Cite this document
Summary
The high level of interconnectedness among nations, countries and cultures is referred to as globalization. The technological advancement has made the world a small place with almost every thing accessible to mankind (Globalization101, n.p). This high interaction and interdependence causes cultural mix up or cultural hybridization…
Download full paperFile format: .doc, available for editing
HIDE THIS PAPERGRAB THE BEST PAPER91.2% of users find it useful 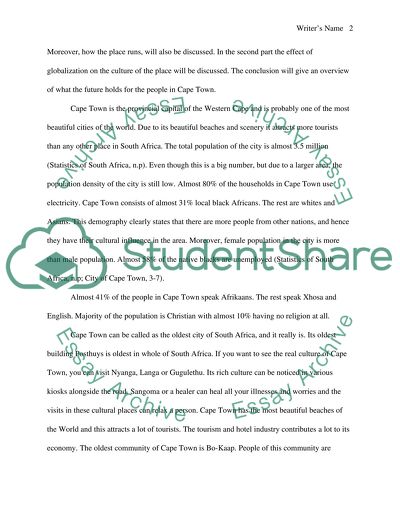 Download file to see previous pages Many other people take globalization as a bargain to their culture and heritage, which is not acceptable to them. These people say that globalization is destroying their roots and their identity i.e. culture (Barlow, n.p). The globalization of products and commodities is considered to be a good thing; however this also has its own negative points. It not only declines the sales of locally made products but also disrupts the local economy. Hence it can be noted that globalization has both positive and negative outcomes.
This report will discuss the processes and effects of globalization in Cape Town, South Africa. The first part of the report will discuss the culture of the place and how it is organized. Moreover, how the place runs, will also be discussed. In the second part the effect of globalization on the culture of the place will be discussed. The conclusion will give an overview of what the future holds for the people in Cape Town.
Cape Town is the provincial capital of the Western Cape and is probably one of the most beautiful cities of the world. Due to its beautiful beaches and scenery it attracts more tourists than any other place in South Africa. The total population of the city is almost 3.5 million (Statistics of South Africa, n.p). Even though this is a big number, but due to a larger area, the population density of the city is still low. Almost 80% of the households in Cape Town use electricity. Cape Town consists of almost 31% local black Africans. The rest are whites and Asians. This demography clearly states that there are more people from other nations, and hence they have their cultural influence in the area. Moreover, female population in the city is more than male population. Almost 58% of the native blacks are unemployed (Statistics of South Africa, n.p; City of Cape Town, 3-7).
Almost 41% of the people in Cape Town speak Afrikaans. The rest speak Xhosa and English. Majority of the population is Christian with almost 10% having no religion at all.
Cape Town can be called as the oldest city of South Africa, and it really is. Its oldest building Posthuys is oldest in whole of South Africa. If you want to see the real culture of Cape Town, you can visit Nyanga, Langa or Gugulethu. Its rich culture can be noticed in various kiosks alongside the road. Sangoma or a healer can heal all your illnesses and worries and the visits in these cultural places can relax a person. Cape Town has the most beautiful beaches of the World and this attracts a lot of tourists. The tourism and hotel industry contributes a lot to its economy. The oldest community of Cape Town is Bo-Kaap. People of this community are Muslims. Their colorful cottages and mosques, with the muezzin sound echoing in Bo-Kaaps streets is a new thing for people visiting the place (Safari Now, n.p).
Since 1980, Cape Town had an above average growth rate of Gross Domestic Product. This average is even higher then the entire nations average. The main reason for this is the fact hat Cape Town has competitive advantage in many areas. In electronic, electrical and certain manufacturing areas, Cape Town is considered to be one of the best. The Annual GDP growth of Cape Town is almost 2.6%, whereas of Durban it is 0.4% and Johannesburg it is 2.0%. After 1999 there was a small dip in the growth of Cape Tow ...Download file to see next pagesRead More
Share:
Tags
Cite this document
(“The Processes of Globalization and Culture in Cape Town Essay”, n.d.)
Retrieved from https://studentshare.org/miscellaneous/1534125-the-processes-of-globalization-and-culture-in-cape-town

(The Processes of Globalization and Culture in Cape Town Essay)
https://studentshare.org/miscellaneous/1534125-the-processes-of-globalization-and-culture-in-cape-town.

“The Processes of Globalization and Culture in Cape Town Essay”, n.d. https://studentshare.org/miscellaneous/1534125-the-processes-of-globalization-and-culture-in-cape-town.
Comments (0)
Click to create a comment or rate a document

...Globalization and Protectionism in the 21st Century Globalization is an international phenomenon with far-reaching consequences in the social, political and economic realms. Economic globalization, namely the spread of neoliberalism and capitalist-inspired consumerism as the dominant engine of economic growth, has both supporters and detractors. The world is becoming more and more interdependent and whether you think globalization is a good or bad thing, it is here to stay. Many people in developed countries argue in favor of protectionism because foreign wages are much lower and domestic producers cannot compete. The result is that jobs are lost as employment trends shift overseas. Seeking to explore the present international...
6 Pages(1500 words)Case Study

... work is a process; there is a need to understand what the customer needs for delivering it; it should be right the first time and every time; the aim should be for prevention and not detection; and the focus should be on value addition and not cost-addition (Halliday, 2002). Impact of Organisational Culture on Effectiveness Knowledge is an important asset in public sector organisations that should be carefully managed. However, knowledge management studies have been neglected in the public sector. This is a serious drawback as public sector organisations are in the business of developing and providing knowledge, and have been classified as knowledge-intensive organisations. Organisations have knowledge as their core product, provide...
10 Pages(2500 words)Coursework

Climate change and globalization are intricately linked. With the passage of time, many environmental issues, like global warming, have...
6 Pages(1500 words)Coursework
sponsored ads
Save Your Time for More Important Things
Let us write or edit the essay on your topic "The Processes of Globalization and Culture in Cape Town" with a personal 20% discount.
GRAB THE BEST PAPER

Let us find you another Essay on topic The Processes of Globalization and Culture in Cape Town for FREE!