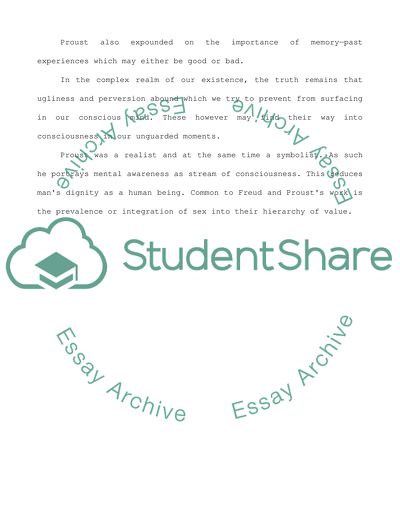 Time Regained In Search for Lost Times Volume VI From Symbolism to Consciousness Time Regained: In Search for Lost Times, Volume VI, the final book in Proust's masterpiece, la recherche du temps perdu, chronicles the years of World War I, when, as M. de Charlus reflects on a moonlit walk, Paris threatens to become another Pompeii. Years later, after the war's end, Proust's narrator returns to Paris, where Mme. Verdurin has become the Princesse de Guermantes. He reflects on time, reality, jealousy, artistic creation, and the raw material of literature--his past life. This is indispensable to Proust which consists of four separate sections of characters, of real and historical persons, of places, and of themes.
Proust, a contemporary of Freud was greatly influenced by the latter in his philosophical leanings and in literary work. Freud treated symbolism in his book Psychoanalysis. According to this theory he propounded which must have influenced Proust, objects or ideas are represented by symbols. Our dreams can symbolize something we have left unexpressed and remain embedded in our unconscious mind. Many of Freud's ideas, however, are sex-oriented .
Proust also expounded on the importance of memory-past experiences which may either be good or bad.
In the complex realm of our existence, the truth remains that ugliness and perversion abound which we try to prevent from surfacing in our conscious mind. These however may find their way into consciousness in our unguarded moments.
Proust was a realist and at the same time a symbolist. As such he portrays mental awareness as stream of consciousness. This reduces man's dignity as a human being. Common to Freud and Proust's work is the prevalence or integration of sex into their hierarchy of value. Read More
Share:
Tags
Cite this document
(“Discuss Proust's theory of memory Essay Example | Topics and Well Written Essays - 500 words”, n.d.)
Retrieved from https://studentshare.org/miscellaneous/1533504-discuss-prousts-theory-of-memory

CHECK THESE SAMPLES OF Discuss Proust's theory of memory

Normally when the question is precise it may have an assumptive impact, for instance using a definite article 'the' contrasted with the less definite indefinite article 'a'. Therefore, for an effective revision, one should have precise and simple to rule out any presumptions, particularly when someone is using test questions. Fatigue Physical fatigue reduces the aptitude to perform physical activities like running. Fatigue also affects cognitive working and it becomes tougher to think and make operative decisions. Individuals have to be free from fatigue, either from the revision itself or other physical, emotional or physical stress. Fatigue is characterized by yawning, forgetfulness, dizziness among other factors. Schema theory...
4 Pages(1000 words)Essay

... memory allows for ‘two domain specific working memory systems to operate at the same time with very little interference (Morris & Maisto, 2005, p.230).’ Personality profile Both the interviewees have undergone the Myers’ Briggs personality test and agree with the results of ESTJ. E- Extraverted, S- Sensing, T- Thinking and J- Judging that have emerged. The Myers’ Briggs Personality Test draws from Jung’s theory of personality and lists 16 personality types. People who come under the type ESTJ have a tendency to actively take charge and organize things. They take responsibility to complete their jobs in a perfect manner (Morris & Maisto, 2005, p. 70). They are quick to decide and may tend to be aggressive. They tend to be conscientious...
6 Pages(1500 words)Assignment

... individuals carry out their own prescribed roles and traditional teaching systems do conform to this framework (Cole, 2004: 25-27). One of the criticisms of this theory is that bureaucracy can be dehumanizing and inefficient through red tape. In the field of education, this could mean that sometimes, the welfare of young children could be negatively impacted (Ritzer, 2000). As a result, motivating these employees is vital to ensure that business profits are maintained. Conclusions: On the basis of the above, it may be concluded that of all the three management theories discussed above, Max Weber’s bureaucratic theory appears to have the highest level of relevance in the field of early childhood education. Fayol’s theory has limited...
6 Pages(1500 words)Coursework

President Andrew Jackson led an example of an administration that set the stage for the way in which James Polk would lead. In 1817, as a still yet military leader, Jackson led the United States into the first of three conflicts with the Seminole Indians from which the acquisition of Florida from Spain would be negotiated and finalized. The situation with Spain was tenuous and should have been dealt with in a diplomatic and cautious manner, but in 1817 President Monroe wrote a letter to General Jackson stating that “Great interests...
8 Pages(2000 words)Article
sponsored ads
Save Your Time for More Important Things
Let us write or edit the essay on your topic "Discuss Proust's theory of memory" with a personal 20% discount.
GRAB THE BEST PAPER

Let us find you another Essay on topic Discuss Proust's theory of memory for FREE!