Comments (0)
Add to wishlistDelete from wishlist
Cite this document
Summary
The No Take Zone Policy (NTZ) in Lundy Marine Nature Reserve is yielding positive results according to the monitoring program's lead scientist, Dr Miles Hoskin. After 18 months of NTZ, bigger and more abundant lobster population as compared to control areas outside of the zone was reported.
…
Download full paperFile format: .doc, available for editing
HIDE THIS PAPERGRAB THE BEST PAPER93.1% of users find it useful 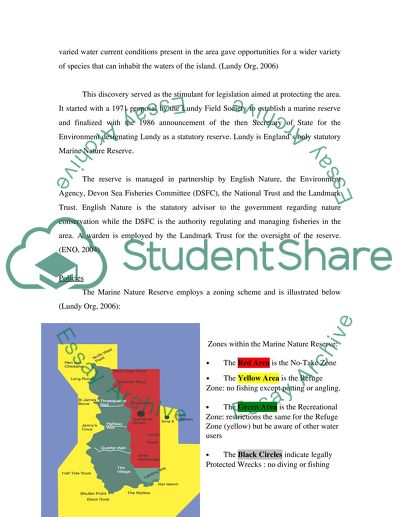 Download file to see previous pages It is administered by the Torridge district of the county of Devon. It has a total area of 4.24 km2 and has a resident population of 18 people located at the south of the island. The island was leased by the National Trust to the Landmark Trust. It was named as the 10th greatest natural wonder in Britain by the 2005 opinion poll of Radio Times (wikipedia, 2006).
Due to the development of the aqualung, Lundy's incredibly diverse marine plants and animals were discovered. The array includes rare and unusual species such as the solitary cup corals, sea fans and sponges. An explanation offered for the diversity is the variety of underwater habitats in its seabed. The variety in shelter coupled with the also varied water current conditions present in the area gave opportunities for a wider variety of species that can inhabit the waters of the island. (Lundy Org, 2006)
This discovery served as the stimulant for legislation aimed at protecting the area. It started with a 1971 proposal by the Lundy Field Society to establish a marine reserve and finalized with the 1986 announcement of the then Secretary of State for the Environment designating Lundy as a statutory reserve. Lundy is England's only statutory Marine Nature Reserve.
The reserve is managed in partnership by English Nature, the Environment Agency, Devon Sea Fisheries Committee (DSFC), the National Trust and ...
A warden is employed by the Landmark Trust for the oversight of the reserve. (ENO, 2004)
Policies
The Marine Nature Reserve employs a zoning scheme and is illustrated below (Lundy Org, 2006):
Zones within the Marine Nature Reserve:
The Red Area is the No-Take Zone
The Yellow Area is the Refuge Zone: no fishing except potting or angling.
The Green Area is the Recreational Zone: restrictions the same for the Refuge Zone (yellow) but be aware of other water users
The Black Circles indicate legally Protected Wrecks : no diving or fishing without a license from English Heritage is allowed
The Blue Area covers the rest of the Marine Nature Reserve and is the General Use Zone: all activities allowed except spear fishing.
A prominent feature of the zoning scheme is the NO TAKE ZONE (NTZ). This zone employs the policy of prohibiting fishing and even collection of any kind of sea life in the waters east of Lundy. The implementation of this policy is ensured by the DSFC as it is incorporated in their by-law.
The NTZ has coordinates north to Lat 51 12.04N, south to Lat 51 10.07N and east from Lundy's shores to Long 004 39.00W. Anchors and diver shot lines within 100m of the Knoll Pins is also prohibited in this zone.
The No Take Zone was predicted to be able to enhance populations of fish and shellfish stocks within and outside the closed area by establishing a refuge for fish and shellfish stocks. Greater catches of fish for fishermen around the edges of the closed area was also seen as probable. The island's tourism industry was also seen as a direct beneficiary of the project.
The reserve employs the following system (Lundy Org, 2006):
Since underwater wildlife ...Download file to see next pagesRead More
Share:
Tags
Cite this document
(“Policy in Lundy Marine Nature Reserve Yields Positive Results Article”, n.d.)
Policy in Lundy Marine Nature Reserve Yields Positive Results Article. Retrieved from https://studentshare.org/miscellaneous/1533245-policy-in-lundy-marine-nature-reserve-yields-positive-results

... up of EU and the functioning of EUs institutions and policies and the satisfactory continuation of the EUs growth. The enlargement is an ongoing process. EU is now handling the cases of prospective members. In this context, the situation and prospectus of the candidature of Turkey is entirely different. This is the most toughest one the EU has ever faced and it is still under consideration. It is the biggest country to apply for membership and some member states have serious reservations about its candidature being ever accepted. Cyprus question is the main cause of dispute and puts a mark on the candidature of Turkey. The accession negotiations began in 2005 and it still continues. Many members put forth the argument—granted Turkey...
9 Pages(2250 words)Case Study

6 Pages(1500 words)Case Study
sponsored ads
Save Your Time for More Important Things
Let us write or edit the article on your topic "Policy in Lundy Marine Nature Reserve Yields Positive Results" with a personal 20% discount.
GRAB THE BEST PAPER

Let us find you another Article on topic Policy in Lundy Marine Nature Reserve Yields Positive Results for FREE!