Comments (0)
Add to wishlistDelete from wishlist
Cite this document
Summary
In the world today substance abuse has become very common, people might think that children start it as they are unaware of the serious consequences and it shapes up to be their habit in the future but facts show substance abuse and addiction know no class, age and sex boundaries…
Download full paperFile format: .doc, available for editing
HIDE THIS PAPERGRAB THE BEST PAPER93.6% of users find it useful 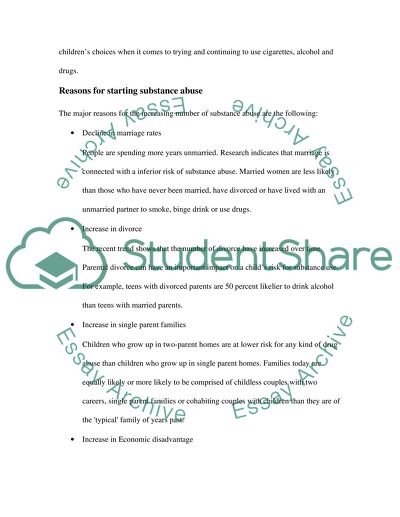 Download file to see previous pages The reach of substance abuse also extends to schools, communities, health and welfare agencies, the justice systems and to society at large. We all shoulder the costs (Beverly Conyers, 2003). Children of substance abusers suffer the most, from direct effects on their physical and mental health to influences on their own use of tobacco, alcohol or drugs. The family's role in the development and results of substance abuse is unique: it suffers some of the direst consequences and holds the potential of the most powerful protective influences against it. A focus on families is critical to understanding and preventing the destructive intergenerational cycle of substance abuse and addiction. Alcoholism and drug abuse often are referred to as family diseases because the serious negative consequences of addiction and the importance of recovery affect not only the substance abuser but also all members of the family. There are certain reasons as to why people start substance abuse (Pauline G. Boss, 2001). Parents and family members can have an enormous positive impact on children's substance-use decisions and behavior. No protection is absolute, but parents hold the greatest number of tools and have the greatest opportunity to shape children's choices when it comes to trying and continuing to use cigarettes, alcohol and drugs.
People are spending more years unmarried. ...
Increase in divorce
The recent trend shows that the number of divorce have increased over time. Parental divorce can have an important impact on a child's risk for substance use. For example, teens with divorced parents are 50 percent likelier to drink alcohol than teens with married parents.
Increase in single parent families
Children who grow up in two-parent homes are at lower risk for any kind of drug abuse than children who grow up in single parent homes. Families today are equally likely or more likely to be comprised of childless couples with two careers, single parent families or cohabiting couples with children than they are of the 'typical' family of years past.
Increase in Economic disadvantage
The financial condition of a family can lead a person to substance abuse. The increase in single-parent families has served to broaden the economic inequality across households, often with single-mothers comprising the poorer end of this spectrum. However its still not clear that the relationship between substance abuse and economic condition is very strong.
To fit in a group of friends
Children or teens when moving around places and cities due to the professional life of a parent or due to any other reason, make new friends everywhere. The new friends might be doing substance abuse hence to fit in with them the children have to be like them that is to do substance abuse otherwise they are not included in the group.
Peer pressure
Peer pressure is a major reason for children doing substance abuse. The peers call children names and tease them about not doing substance abuse. The children usually don't like being called names and being teased by others. Hence to prove the others ...Download file to see next pagesRead More
Share:
Tags
Cite this document
(“Substance Abuse Essay Example | Topics and Well Written Essays - 2000 words”, n.d.)
Retrieved from https://studentshare.org/miscellaneous/1533228-substance-abuse

CHECK THESE SAMPLES OF Substance Abuse

Since child abuse has been positively correlated to juvenile aggression and violence, early intervention and therapy become vital. In order to deal with this problem on a comprehensive basis, it is necessary that there is community support provided at local, state and federal levels, as well as support systems in schools for those individuals who are anti-social in their behavior. The prevention of anti-social behavior will depend to a great extent upon how effective the intervention process is and whether or not therapy is administered to victimized children early enough to arrest the degradation into anti-social behavior.

The purpose of this research study, therefore, is to examine existing intervention measures that...

The literature seems clear that these traumas when combined with alcohol and other factors present with both alcohol use and Post Traumatic Stress Disorder (PTSD).

Tay (2005) presents the attachment theory which says that "across species, the attachment system was as important to species survival as were feeding and reproduction" (p. 7). She further explains that there are several problems for children and adults when they are substance abusers. Most importantly there is a disruption in the relationship between family members, children may be faced with living in various places to ensure their safety and the parent's ability to take care of their children is damaged (p. 6).
Zubretsky (1999) did a study involving Ba...

...use and nicotine addiction, is associated with a wide range of serious health and social problems. Recent epidemiological evidence demonstrates that 72 conditions requiring inpatient treatment are wholly or partially attributable to substance abuse. Consequently, the estimated annual cost for health care, law enforcement, motor vehicle crashes, crime, and lost productivity due to substance abuse is nearly 1 thousand dollars for every American citizen, including children (Austin, 2005). Such disturbing situation with substance abuse can not but appeal for immediate and effective actions from the government and local authorities. ...
10 Pages(2500 words)Term Paper

The statistics also indicate that the total number of deaths was 12,941 with the white population encompassing 11,595 and the black 1 162. These statistics show that the rate of birth is higher than the rate of deaths i.e. 10.4% to 9.7%.
The county government enhances the health of the residents, including the youth through collaborating with the health care providers and other organizations involved in catering for the welfare of the community. According to CityData.com (2012), some of the health care services provided by hospitals to the county residents include Acute Care, Proprietary, emergency service, and veterans administration. The social welfare is enhanced by non-governmental organizations, especially those involved...
6 Pages(1500 words)Coursework
sponsored ads
Save Your Time for More Important Things
Let us write or edit the essay on your topic "Substance Abuse" with a personal 20% discount.
GRAB THE BEST PAPER

Let us find you another Essay on topic Substance Abuse for FREE!