Comments (0)
Add to wishlistDelete from wishlist
Cite this document
Summary
As interpreted in the numerous court decisions, the protection against the self - incrimination means that a witness before any government officials or tribunal may refuse to give testimony that might be used against the witness in the future criminal proceeding or that might result in uncovering further evidence that could be used against the witness in such a proceeding.
…
Download full paperFile format: .doc, available for editing
HIDE THIS PAPERGRAB THE BEST PAPER94.8% of users find it useful 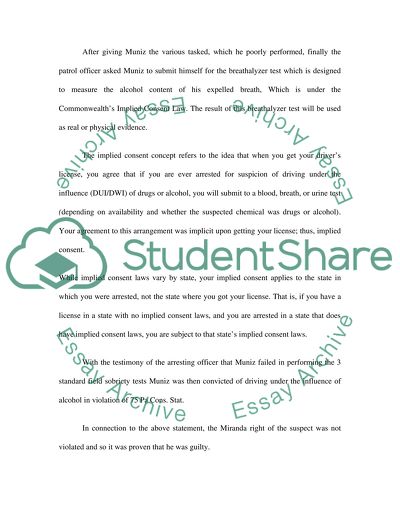 Pennsylvania vs. Muniz Self - incrimination is the act by an individual of furnishing testimony or evidence that they may be used in a legal proceeding to implicate that same individual for violating the law.
As interpreted in the numerous court decisions, the protection against the self - incrimination means that a witness before any government officials or tribunal may refuse to give testimony that might be used against the witness in the future criminal proceeding or that might result in uncovering further evidence that could be used against the witness in such a proceeding.
Miranda v. Arizona in the US Supreme Court held that unless a criminal suspect is informed of the right to counsel and the right against self-incrimination during the police interrogation, evidence so obtained may not be used to prosecute the suspect.
In the case of Inocencio Muniz, a drunk-driven suspect, who was asked to perform the 3 standard field sobriety tests in order to know the mental state of the suspect and not merely for testimonial purposes. The tests were namely horizontal nystagmus test, walk and turn test, and one leg stand test.
While performing the tests stated above, the patrol officer, the one who spotted Muniz on the roadside, asked him few questions such as Muniz's name, address, height, weight, eye color, date of birth. These questions were not intended to elicit information for investigatory purposes but it focuses primarily upon the perspective of the suspect and therefore not incriminating.
After giving Muniz the various tasked, which he poorly performed, finally the patrol officer asked Muniz to submit himself for the breathalyzer test which is designed to measure the alcohol content of his expelled breath, Which is under the Commonwealth's Implied Consent Law. The result of this breathalyzer test will be used as real or physical evidence.
The implied consent concept refers to the idea that when you get your driver's license, you agree that if you are ever arrested for suspicion of driving under the influence (DUI/DWI) of drugs or alcohol, you will submit to a blood, breath, or urine test (depending on availability and whether the suspected chemical was drugs or alcohol). Your agreement to this arrangement was implicit upon getting your license; thus, implied consent.
While implied consent laws vary by state, your implied consent applies to the state in which you were arrested, not the state where you got your license. That is, if you have a license in a state with no implied consent laws, and you are arrested in a state that does have implied consent laws, you are subject to that state's implied consent laws.
With the testimony of the arresting officer that Muniz failed in performing the 3 standard field sobriety tests Muniz was then convicted of driving under the influence of alcohol in violation of 75 Pa Cons. Stat.
In connection to the above statement, the Miranda right of the suspect was not violated and so it was proven that he was guilty. Read More
Share:
Tags
Cite this document
(“Law - court Essay Example | Topics and Well Written Essays - 500 words”, n.d.)
Law - court Essay Example | Topics and Well Written Essays - 500 words. Retrieved from https://studentshare.org/miscellaneous/1533171-law-court

CHECK THESE SAMPLES OF Law - court

Warrantless searches can be made where arrests are lawful and such searches are incident to such arrests. If the arrest was not lawful then the search becomes unlawful as well (Siegel & Senna 251). Generally, an arrest is lawful if the arresting officer is equipped with a warrant of arrest issued by a court with authority or jurisdiction, on the basis of a probable cause specifying the name or identity of the person to be arrested. However, even this doctrine is subject to the following exceptions: one, when a felony is being committed; second, when a felony has just been committed and the arresting officer or person has knowledge to reasonably believe that a person has committed it; third, all breaches of peace like riots and...
13 Pages(3250 words)Case Study

Some of the more important rights bestowed upon employees by the employment law are the right to claim wrongful or unfair dismissal and payment for redundancy. Other legislation, such as the health and safety statute and the insolve...
7 Pages(1750 words)Case Study
sponsored ads
Save Your Time for More Important Things
Let us write or edit the essay on your topic "Law - court" with a personal 20% discount.
GRAB THE BEST PAPER

Let us find you another Essay on topic Law - court for FREE!