Comments (0)
Add to wishlistDelete from wishlist
Cite this document
Summary
There are many definitions of the term philosophy. Wikipedia (2006) lists the meaning as, "a field of study in which people question and create theories about the nature of reality." Different fields such as law, metaphysics, aesthetics, ontology, epistemology, and ethics all fall under the category of philosophy…
Download full paperFile format: .doc, available for editing
HIDE THIS PAPERGRAB THE BEST PAPER96.2% of users find it useful 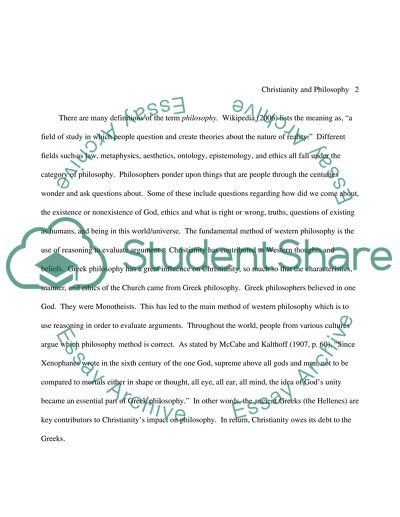 Extract of sample "Christianity and Philosophy"

Christianity and Philosophy Running Head: CHRISTIANITY'S IMPACT ON PHILOSOPHY Christianity's Impact on Philosophy in APA Style
Name of Student
Name of School and University
Christianity and Philosophy 2
There are many definitions of the term philosophy. Wikipedia (2006) lists the meaning as, "a field of study in which people question and create theories about the nature of reality." Different fields such as law, metaphysics, aesthetics, ontology, epistemology, and ethics all fall under the category of philosophy. Philosophers ponder upon things that are people through the centuries wonder and ask questions about. Some of these include questions regarding how did we come about, the existence or nonexistence of God, ethics and what is right or wrong, truths, questions of existing as humans, and being in this world/universe. The fundamental method of western philosophy is the use of reasoning to evaluate arguments. Christianity has contributed to Western thoughts and beliefs. Greek philosophy has a great influence on Christianity, so much so that the characteristics, manner, and ethics of the Church came from Greek philosophy. Greek philosophers believed in one God. They were Monotheists. This has led to the main method of western philosophy which is to use reasoning in order to evaluate arguments. Throughout the world, people from various cultures argue which philosophy method is correct. As stated by McCabe and Kalthoff (1907, p. 60), "Since Xenophanes wrote in the sixth century of the one God, supreme above all gods and men, not to be compared to mortals either in shape or thought, all eye, all ear, all mind, the idea of God's unity became an essential part of Greek philosophy." In other words, the ancient Greeks (the Hellenes) are key contributors to Christianity's impact on philosophy. In return, Christianity owes its debt to the Greeks.

Christianity and Philosophy 3
Western philosophy is influenced by Greco-Roman philosophy which consisted of philosophers such as Socrates, Plato, and Aristotle. Then the Medieval philosophy came about and this was when Augustine of Hippo and Albertus Magnus, Christian philosophers who were also scholars, started their writings. Modern Western philosophy is influenced by the works of Ren Descartes and focuses on the mind/body connection.
The principle of Christianized philosophical issues addresses generalized topics such as: the nature of man, our purpose on Earth, our need for a God/Savior, how God influences our lives (the roles of God) the choice for man to serve himself or to serve God, issues faced in society regarding these matters, and the list continues. (What principle Christianized philosophical issues 2006). The article also states that The Christian philosophy was summarized by Jesus himself when He said "You shall love the Lord your God with all your heart, and with all your soul, and with all your mind." and "You shall love your neighbour as yourself." (Matt. 22:37, 39).
The principle of Christianized philosophical issues deals with the unity of mankind. Unity and uniqueness must be involved in order to pass them to mankind. The idea and belief of one God is reflected in the idea of the unity of mankind; one mankind. Then the belief that man was made created in the image of God and that man is above the angels, the animals, and all other creatures.
References

CHECK THESE SAMPLES OF Christianity and Philosophy

In view of the fact that school provides a gateway to new horizons, it is the conviction of the author of this paper that all children should be educated. It is their right to learn and be exposed to a plethora of ideas about life. Regardless of their color, race, creed, socio-economic background, physical, intellectual or emotional state, al...

Jean Jacques Rousseau (1712 to 1778) was a Genevois philosopher. Besides that, he was a writer and a composer of romanticism. His philosophies were very influential so much so that they were considered to have triggered the French...
7 Pages(1750 words)Coursework
sponsored ads
Save Your Time for More Important Things
Let us write or edit the essay on your topic "Christianity and Philosophy" with a personal 20% discount.
GRAB THE BEST PAPER

Let us find you another Essay on topic Christianity and Philosophy for FREE!