Comments (0)
Add to wishlist Delete from wishlist
Cite this document
Summary
There is no denying that Christianity has wide-ranging effects on the history of man. It has been an important force that shaped culture and society. This paper aims to look at the history of Christianity, in order to determine how it changed society and culture at its period of establishment. …
Download full paper File format: .doc, available for editing
HIDE THIS PAPERGRAB THE BEST PAPER97.1% of users find it useful 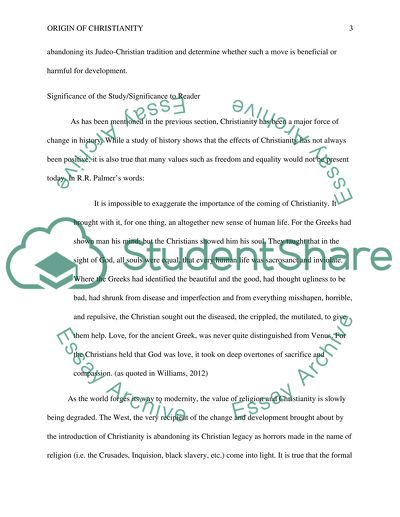 Download file to see previous pages . . the most powerful moral lever that has ever been applied to the affairs of men” (pp. 28–29). There is no denying that Christianity has wide-ranging effects on the history of man. It has been an important force that shaped culture and society. This paper aims to look at the history of Christianity, in order to determine how it changed society and culture at its period of establishment. Through the use of the Bible and historical documents, the researcher hopes to create a picture of society of the period covered by the period covered by the Holy Book, in order to understand the context of Christianity’s introduction. This research hopes to identify why and how Christianity became a source of development in the Western world. Moreover, through the use of biblical and historical text, the researcher can determine why Christianity was instituted in the first place. By gaining an insight as to the purpose of Christianity, this research can pose some recommendations on how the thousands of Christian denominations found in the world today can work together and bring about lasting change. This research aims to rediscover the Christian legacy and help Christian denominations fine their common heritage in order for them to face the challenges of the future.This research also hopes to understand why the Western world is now in the process of abandoning its Judeo-Christian tradition and determine whether such a move is beneficial or harmful for development. Significance of the Study/Significance to Reader As has been mentioned in the previous section, Christianity has been a major force of change in history. While a study of history shows that the effects of Christianity has not always been positive, it is also true that many values such as freedom and equality would not be present today. In R.R. Palmer’s words: It is impossible to exaggerate the importance of the coming of Christianity. It brought with it, for one thing, an altogether new sense of human life. For the Greeks had shown man his mind; but the Christians showed him his soul. They taught that in the sight of God, all souls were equal, that every human life was sacrosanct and inviolate. Where the Greeks had identified the beautiful and the good, had thought ugliness to be bad, had shrunk from disease and imperfection and from everything misshapen, horrible, and repulsive, the Christian sought out the diseased, the crippled, the mutilated, to give them help. Love, for the ancient Greek, was never quite distinguished from Venus. For the Christians held that God was love, it took on deep overtones of sacrifice and compassion. (as quoted in Williams, 2012) As the world forges its way to modernity, the value of religion and Christianity is slowly being degraded. The West, the very recipient of the change and development brought about by the introduction of Christianity is abandoning its Christian legacy as horrors made in the name of religion (i.e. the Crusades, Inquision, black slavery, etc.) come into light. It is true that the formal church is (as represented by the Papacy) has not always been a positive influence for social change. As more and more people reject the value of God and the divine, it is important for believers to merge what they know about Christianity and the facts of history in order to fortify their belief. It is no longer possible for believers to disregard the crimes made in the name of Christ. The study is important because it provides a scientific understanding of Christianity and its context. It also tries to determine the purpose that Christianity served in human history, provides and insight into the future role of ...Download file to see next pages Read More
Share:
Tags
Cite this document
(“What is the Origin of Christianity Identification and Discussion of Essay”, n.d.)
What is the Origin of Christianity Identification and Discussion of Essay. Retrieved from https://studentshare.org/religion-and-theology/1474268-what-is-origin-of-christianity

“What Is the Origin of Christianity Identification and Discussion of Essay”, n.d. https://studentshare.org/religion-and-theology/1474268-what-is-origin-of-christianity.
Comments (0)
Click to create a comment or rate a document

The level of capital has been used as a criterion for the classification of a company within its market. Regarding this issue it is noticed by Penrose (1952, 810 in Cooper, 1997, 750) that ‘positive profits can be treated as the criterion of natural selection -- the firms that make profits are selected or 'adopted' by the environment, others are rejected and disappear’On the other hand, Ruhnka (1985, 45) supported that ‘the primary source of capital for most start-up and development stage companies is equity capital raised through limited stock offerings that are exempt from expensive federal and state registration requirements’. In other words, the capital of the firm can be formulated through a series of...
13 Pages (3250 words) Term Paper

Community life has its advantages but also has its limitations to the members and the outsiders.
“The good things we secure for ourselves are uncertain and precious until it is secured for everyone and incorporated into our common life.”-Jane Addams. With society moving faster and more detached to technology, busy schedules, and job changes, it becomes harder and harder to feel a sense of community. This can result in a life of solitude and a lose a sense of belonging. Community life helps extract people out of this solitude life and introduce better, challenging and fun tasks such as participation in acts of kindness. It also provides room for volunteering, meeting neighbors, discussing important issues with othe...
7 Pages (1750 words) Case Study

The use of the narrator in the novel helps illustrate sensual, erotic, and heartbreaking moments. To achieve its goal of exploring the acknowledged subject of love, betrayal, beauty, and desire, the author approaches the issues with an overwhelming zeal. Hence, the aim of the study is to evaluate the various techniques used in the two narratives in communicating their notions of the various subjects within the novels.
Acker uses language from other writers; as well, the plot in her fiction employs appropriation, which in return propels appropriation to the extreme since a huge part of her writing integrates texts of fiction from past writers. Blood and Guts in High school deal with the journey of a young lady through a dark w...
8 Pages (2000 words) Literature review
sponsored ads
Save Your Time for More Important Things
Let us write or edit the essay on your topic "What is the Origin of Christianity Identification and Discussion of Issues" with a personal 20% discount.
GRAB THE BEST PAPER

Let us find you another Essay on topic What is the Origin of Christianity Identification and Discussion of Issues for FREE!