Comments (0)
Add to wishlistDelete from wishlist
Cite this document
Summary
Three important considerations in the setting and adoption of standards are the ideas of interoperability, economic development, and innovation. Technological innovation occurs on a wide scale and often products that are developed have the potential to complement each other…
Download full paperFile format: .doc, available for editing
HIDE THIS PAPERGRAB THE BEST PAPER91.1% of users find it useful 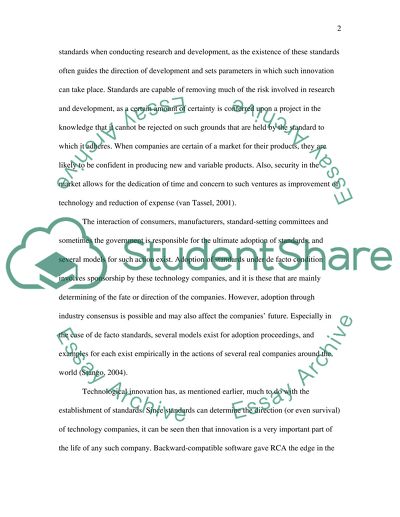 Download file to see previous pages This is known as interoperability, and is important for the developer as well as the consumer. As the necessity for interoperability results from widespread innovation, it also facilitates such innovation (Digital TV over Broadband, 1). Yet in today's high-technological industry, these innovators and developers are faced with challenges when adoptions of standards become imminent. The rigors of standard adoption procedures, including the very real possibility of standard wars, can place these companies in positions that force drastic action. Because of the ability of standards to affect welfare and economic development, even governmental bodies sometimes see the need to become involved in setting standard. It is therefore often the case that technology companies move in and out of technological arenas based on outcomes of these standard-establishing battles.
Consumers and manufacturers take keen interest in the interoperability of technological components that perform similar or complementary functions. It is, for example, very important that appliances plug into electric socket and that pencils fit into sharpeners. This is one of the benefits of standards, and it offers a significantly large incentive for the acquisition of a product. Likewise, manufacturers pay close attention to standards when conducting research and development, as the existence of these standards often guides the direction of development and sets parameters in which such innovation can take place. Standards are capable of removing much of the risk involved in research and development, as a certain amount of certainty is conferred upon a project in the knowledge that it cannot be rejected on such grounds that are held by the standard to which it adheres. When companies are certain of a market for their products, they are likely to be confident in producing new and variable products. Also, security in the market allows for the dedication of time and concern to such ventures as improvement of technology and reduction of expense (van Tassel, 2001).
The interaction of consumers, manufacturers, standard-setting committees and sometimes the government is responsible for the ultimate adoption of standards, and several models for such action exist. Adoption of standards under de facto condition involves sponsorship by these technology companies, and it is these that are mainly determining of the fate or direction of the companies. However, adoption through industry consensus is possible and may also affect the companies' future. Especially in the case of de facto standards, several models exist for adoption proceedings, and examples for each exist empirically in the actions of several real companies around the world (Stango, 2004).
Technological innovation has, as mentioned earlier, much to do with the establishment of standards. Since standards can determine the direction (or even survival) of technology companies, it can be seen then that innovation is a very important part of the life of any such company. Backward-compatible software gave RCA the edge in the CBS v RCA bid for the adoption of their version of the colored television set as the network standard in the United States. RCA was the official distributor of the standard black-and-white television sets in the country, but alongside the incumbent, the CBS network had been developing a mechanical colored television (Shapiro & Varian, 1999). RCA was much slower in its development of an electronic colored televisio ...Download file to see next pagesRead More
Share:
Tags
Cite this document
(“Standard Battles in Media Industry Essay Example | Topics and Well Written Essays - 2500 words”, n.d.)
Retrieved from https://studentshare.org/miscellaneous/1532783-standard-battles-in-media-industry

CHECK THESE SAMPLES OF Standard Battles in Media Industry

... to aim for the physical modification of themselves to be able to improve confidence due to the notion that slim body and other physical features are the standard of beauty. The said view can even lead to different behavioral and psychological ailments such as eating disorders. This is only one of the negative effects of the media which can result to misconception of the audience. The said view is the same for guys on the basis of their interests and other views (Gauntlett 5; Mediaknowall Homepage; Perse 23). Analysis of the Effects of Media Based on the study of the effects of media it can be considered that the impacts can either be positive or negative in nature. The said effects are based on the different aspects...
7 Pages(1750 words)Case Study

In 2001 alone, the US reported earning from the industry close to two hundred billion US dollars. According to a previous study, the middle east tops the list as the largest exporters of crude oil taking over sixty-six percent of the global production of oil. Europe is the least producers of oil taking only two percent of the market share (Green, 4).
According to the American Association of Petroleum Geologists, the major problem facing the industry is lack of workforce and the increase in demand for oil. The report indicated that by 2030, the world’s oil demand is expected to increase from one hundred and three to one hundred and thirty million barrels per day. Natural gas, on the other hand, will expectedly increase t...
7 Pages(1750 words)Coursework
sponsored ads
Save Your Time for More Important Things
Let us write or edit the essay on your topic "Standard Battles in Media Industry" with a personal 20% discount.
GRAB THE BEST PAPER

Let us find you another Essay on topic Standard Battles in Media Industry for FREE!