Comments (0)
Add to wishlistDelete from wishlist
Cite this document
Summary
Scientific paradigm is part of the modern scientifically inspired Western worldview, which perceives the world from a disenchanted stance, as consisting of autonomous things, different from worldview of other cutlers. Eastern worldview, particularly Buddhist, consider all of the material reality stemming from our consciousness…
Download full paperFile format: .doc, available for editing
HIDE THIS PAPERGRAB THE BEST PAPER97.7% of users find it useful 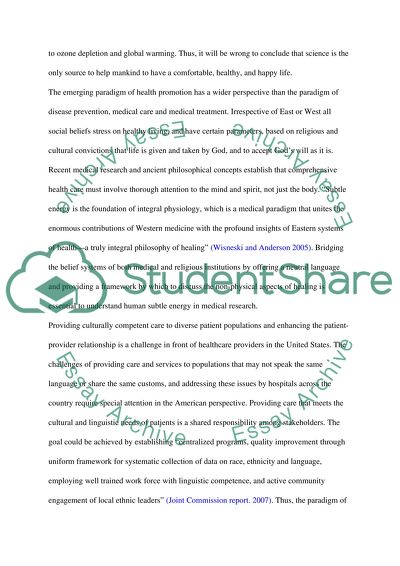 Extract of sample "Culture and Healthcare in America"

Western Scientific Paradigm: A Critique Scientific paradigm is part of the modern scientifically inspired Western worldview, which perceives the world from a disenchanted stance, as consisting of autonomous things, different from worldview of other cutlers. Eastern worldview, particularly Buddhist, consider all of the material reality stemming from our consciousness. The modern Western paradigm can be traced back to Renaissance period which brought cultural shift leading to creation of modern Western society. It may be found that the philosophical basis for modern Western paradigm was founded by Descartes, by developing a method of critical reasoning, and Sir Isaac Newton provided the scientific variation by discovering the law of classical physics.
According to Loraine Magda (2007) "From academia to the applied sciences, medicine, law and politics, Western society operates from a paradigm firmly based on materialism with grave skepticism, and unless proven true by science, becomes relegated to the wasteland of wishful thinking." Most scientists believe that science starts with basic questions and as they try to answer, and develops the answers, it leads to further questions. When students are taught on this basic belief they ignore the interplay of science with society, and such training tends to obscure connection between science and society. Thomas Kuhn says "to acquire the status of a paradigm, a scientific achievement must offer sufficiently convincing resolutions of previously recognized problemsmust also have enough unresolved problems to provide the puzzles for subsequent research practice within the research tradition it comes to define" (Marshall1998). In the view of Vandana Shiva, a "hierarchical perspective will continue to project the Western paradigm as scientifically superior in spite of its current failure in the contest of sustainability of health care and nutrition." We are blessed with modern scientific advancements in the field of health, agriculture, nuclear power, and IT innovations, but it has also contributed destructive elements of biological warfare, petrochemical pollution leading to ozone depletion and global warming. Thus, it will be wrong to conclude that science is the only source to help mankind to have a comfortable, healthy, and happy life.
The emerging paradigm of health promotion has a wider perspective than the paradigm of disease prevention, medical care and medical treatment. Irrespective of East or West all social beliefs stress on healthy living, and have certain parameters, based on religious and cultural convictions that life is given and taken by God, and to accept God's will as it is. Recent medical research and ancient philosophical concepts establish that comprehensive health care must involve thorough attention to the mind and spirit, not just the body. "Subtle energy is the foundation of integral physiology, which is a medical paradigm that unites the enormous contributions of Western medicine with the profound insights of Eastern systems of health-a truly integral philosophy of healing" (Wisneski and Anderson 2005). Bridging the belief systems of both medical and religious institutions by offering a neutral language and providing a framework by which to discuss the non-physical aspects of healing is essential to understand human subtle energy in medical research.
Providing culturally competent care to diverse patient populations and enhancing the patient-provider relationship is a challenge in front of healthcare providers in the United States. The challenges of providing care and services to populations that may not speak the same language or share the same customs, and addressing these issues by hospitals across the country require special attention in the American perspective. Providing care that meets the cultural and linguistic needs of patients is a shared responsibility among stakeholders. The goal could be achieved by establishing "centralized programs, quality improvement through uniform framework for systematic collection of data on race, ethnicity and language, employing well trained work force with linguistic competence, and active community engagement of local ethnic leaders" (Joint Commission report. 2007). Thus, the paradigm of healthcare in US or National Standards for Culturally and Linguistically Appropriate Services in Health Care (CLAS) is that Health Care Organizations should ensure that patient/consumers receive from all staff members effective, understandable, and respectful care that is provided in a manner compatible with their cultural health beliefs and preferred languages.
It is clear that science today is confronted with phenomena that cannot be explained in a mechanical or in a materialistic way. Science is the way the scientists think and perceive and this is unconsciously influenced by Western culture-specific implied knowledge, hidden deeply within our minds. This unconscious programming could be decoded through self-reflection, expanding our thinking process by opening up other forms of knowledge besides scientific knowledge, and willing to change and accommodate other concepts as scientifically operational.
Works cited
Joint Commission Report. National Strategies Needed to Better Serve Increasingly Diverse Patient Population in American Hospitals. The Joint Commission News. News Releases. 2007. 14 Dec. 2007 .
Magda, Loraine. How the NDE Paradigm Challenges Western Assumption. 2007. 14 Dec. 2007 < http://www.nde-paradigm.com/magda1.html>.
Marshall, Gordon. Paradigm: A Dictionary of Sociology. London: Oxford University Press. 1998. 14 Dec. 2007 .
Vandana Shiva. The politics of knowledge at the CBD. Convention on Biological Diversity. TWN. 14 Dec. 2007 .
Wisneski, Len and Anderson, Lucy. The scientific Basis of Integrative Medicine. Book Review. George Washington University Medical Centre: CRC Press. 2005. 14 Dec. 2007 . Read More
Share:
Tags
Cite this document
(“Culture and Healthcare in America Essay Example | Topics and Well Written Essays - 500 words”, n.d.)
Culture and Healthcare in America Essay Example | Topics and Well Written Essays - 500 words. Retrieved from https://studentshare.org/miscellaneous/1532749-culture-and-healthcare-in-america

CHECK THESE SAMPLES OF Culture and Healthcare in America

Let us find you another Essay on topic Culture and Healthcare in America for FREE!