Comments (0)
Add to wishlistDelete from wishlist
Cite this document
Summary
Human resource management in local government has been subject to as much, if not more pressure to change than that of finance or land. Like most public sector organisations, local authorities in United Kingdom are labour-intensive; some 60 per cent of their expenditure goes on the wages, salaries, superannuation and other payments made to or on behalf of their employees…
Download full paperFile format: .doc, available for editing
HIDE THIS PAPERGRAB THE BEST PAPER96.5% of users find it useful 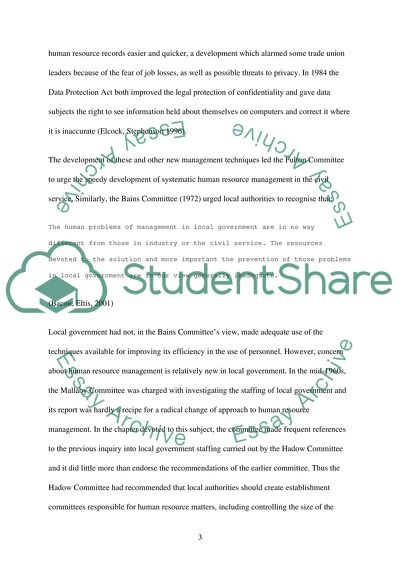 Download file to see previous pages The financial stringencies of recent years have combined with growing anxieties about seemingly inflated local authority staff numbers to persuade local authorities to make increasing efforts to make better use of their existing staff, in order to reduce demands for extra posts. The pressure imposed by compulsory competitive tendering to reduce labour costs in order to retain service contracts within the local authority have also produced major changes in human resource management in local government (Fenwick, Shaw and Foreman, 2003).
Since a long time, methods of improving human resource management and establishment control have expanded greatly in UK. Work study and organisation and methods techniques have developed rapidly. Computers have made the task of collecting, storing and analysing human resource records easier and quicker, a development which alarmed some trade union leaders because of the fear of job losses, as well as possible threats to privacy. In 1984 the Data Protection Act both improved the legal protection of confidentiality and gave data subjects the right to see information held about themselves on computers and correct it where it is inaccurate (Elcock, Stephenson 1996).
The development of these and other new management techniques led the Fulton Committee to urge the speedy development of systematic human resource management in the civil service. Similarly, the Bains Committee (1972) urged local authorities to recognise that:
The human problems of management in local government are in no way different from those in industry or the civil service. The resources devoted to the solution and more important the prevention of those problems in local government are in our view generally inadequate.
(Bacon, Eltis, 2001)
Local government had not, in the Bains Committee's view, made adequate use of the techniques available for improving its efficiency in the use of personnel. However, concern about human resource management is relatively new in local government. In the mid-1960s, the Mallaby Committee was charged with investigating the staffing of local government and its report was hardly a recipe for a radical change of approach to human resource management. In the chapter devoted to this subject, the committee made frequent references to the previous inquiry into local government staffing carried out by the Hadow Committee and it did little more than endorse the recommendations of the earlier committee. Thus the Hadow Committee had recommended that local authorities should create establishment committees responsible for human resource matters, including controlling the size of the authority's departments and vetting requests for new posts. This was establishments work as traditionally understood in the public services: a concern to restrain the size of departments and ensure that new posts are created only when they are absolutely necessary. The establishments committee should be advised by the authority's clerk, a member of whose staff should take responsibility for human resource matters. This approach was largely supported by the Mallaby Commi ...Download file to see next pagesRead More
Share:
Tags
Cite this document
(“Human resource management in UK government Essay”, n.d.)
Human resource management in UK government Essay. Retrieved from https://studentshare.org/miscellaneous/1532591-human-resource-management-in-uk-government

CHECK THESE SAMPLES OF Human resource management in UK government

Civil Aviation Administration of China (CAAC) – undoubtedly advanc...
7 Pages(1750 words)Assignment
sponsored ads
Save Your Time for More Important Things
Let us write or edit the essay on your topic "Human resource management in UK government" with a personal 20% discount.
GRAB THE BEST PAPER

Let us find you another Essay on topic Human resource management in UK government for FREE!