Comments (0)
Add to wishlistDelete from wishlist
Cite this document
Summary
In this study I will focus on how Amitav Ghosh interprets the relationship between religion and nationalism in India, Pakistan, Bengal and Egypt in his writings. He talks about many themes such as the separation between India and Pakistan in 1947…
Download full paperFile format: .doc, available for editing
HIDE THIS PAPERGRAB THE BEST PAPER96% of users find it useful 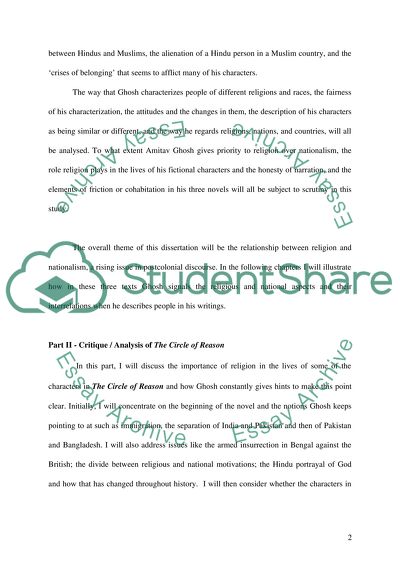 Extract of sample "Religion and Nationalism"

Download file to see previous pages Writers and authors try to portray the relationship between religion and nationalism in different ways. Historically, there have been religious and national conflicts in South Asian countries.
In this study I will focus on how Amitav Ghosh interprets the relationship between religion and nationalism in India, Pakistan, Bengal and Egypt in his writings. He talks about many themes such as the separation between India and Pakistan in 1947, the relationship between Hindus and Muslims, the alienation of a Hindu person in a Muslim country, and the ‘crises of belonging’ that seems to afflict many of his characters.
The way that Ghosh characterizes people of different religions and races, the fairness of his characterization, the attitudes and the changes in them, the description of his characters as being similar or different, and the way he regards religions, nations, and countries, will all be analysed. To what extent Amitav Ghosh gives priority to religion over nationalism, the role religion plays in the lives of his fictional characters and the honesty of narration, and the elements of friction or cohabitation in his three novels will all be subject to scrutiny in this study.
The overall theme of this dissertation will be the relationship between religion and nationalism, a rising issue in postcolonial discourse. In the following chapters I will illustrate how in these three texts Ghosh signals the religious and national aspects and their interrelations when he describes people in his writings.
Part II - Critique / Analysis of The Circle of Reason
In this part, I will discuss the importance of religion in the lives of some of the characters in The Circle of Reason and how Ghosh constantly gives hints to make this point clear. Initially, I will concentrate on the beginning of the novel and the notions Ghosh keeps pointing to at such as immigration, the separation of India and Pakistan and then of Pakistan and Bangladesh. I will also address issues like the armed insurrection in Bengal against the British; the divide between religious and national motivations; the Hindu portrayal of God and how that has changed throughout history. I will then consider whether the characters in the novel consider religion as a myth or an overarching force, and how does religious extremism spread across the border after the partition

To move to other points: do some characters think of religion as a myth How do the Indians treat the missionary's Bibles and why How does the independence of a nation create instability in the frontier regions Why does Ghosh mention the Middle East while dealing with terrorists groups Does it mean that he sees Islam as a contributing factor What are the perceptions and biases in respect to marriages between Hindus and a Muslims And how is religion corrupted by myths / traditions which do not relate to the true ...Download file to see next pagesRead More
Share:
Tags
Cite this document
(“Religion and Nationalism Essay Example | Topics and Well Written Essays - 1000 words”, n.d.)
Retrieved from https://studentshare.org/miscellaneous/1532451-religion-and-nationalism

CHECK THESE SAMPLES OF Religion and Nationalism

Immigration of The West and Religion

..., while Buddhists and Muslims account for less than 2 percent each of the foreign-born population.” (Mossaad and Mather). All these immigrants have brought their diverse culture and religious beliefs along with them, and this religious diversity of the nation has been instrumental in promoting multiculturalism in the US. Thus, it can be concluded that it is the phenomenon of immigration that has brought great changes to many of the political, social, religious and cultural lives of the West. Thus, one can see that there is a close and strong relation between the spread of religion from Eastern countries and immigration to the western countries. The immigration from one country to another can result in a positive impact on both countries...
6 Pages(1500 words)Assignment

Black Nationalism and Its Influence

Designing a Course to Educate About Religion and Culture

...Analytical Report on a Designed Analytical Report on a Designed Part I: Project Memo In the first part of the structure of the course, the information provided illustrates the essential domains and usefulness of this course. For many years, the people of the world have co-exist irrespective with different believes surrounding religion and culture. These are vital elements of life that directs how people live, behave and perceive the material universe. The matter of religion, however, has been of very sensitive nature and many have fallen victims of disobeying the doctrines of a religion’s teachings or for being a member of a different religion. Religion is basically the most powerful tool in the world today. It consumes people...
8 Pages(2000 words)Assignment

In terms of productivity, companies and writers use technology as a means of ensuring that written content can be accessed by different levels of customers requiring different formats.
Social change refers to changes in the way individuals in a community interact with their immediate environment and factors that challenge their being. In this sense, social change takes into account the manner in which people co-exist with one another taking into consideration factors that shape how these individuals survive within the society. For instance, the 21st century has invited social change that is driven by a number of factors among them new education systems, the use of virtual intelligence for surveillance reasons, organized gove...
8 Pages(2000 words)Assignment
sponsored ads
Save Your Time for More Important Things
Let us write or edit the essay on your topic "Religion and Nationalism" with a personal 20% discount.
GRAB THE BEST PAPER

Let us find you another Essay on topic Religion and Nationalism for FREE!