'All These Things That Ive Done' by The Killers - Essay Example

Comments (0)
Add to wishlistDelete from wishlist
Cite this document
Summary
No relationship on earth is more important than man's relationship with their God. It is an individual decision that all men must make. Establishing that relationship is a major portion of man's personal identity, and helps define who they are and where they stand in the eyes of God…
Download full paperFile format: .doc, available for editing
HIDE THIS PAPERGRAB THE BEST PAPER92.8% of users find it useful 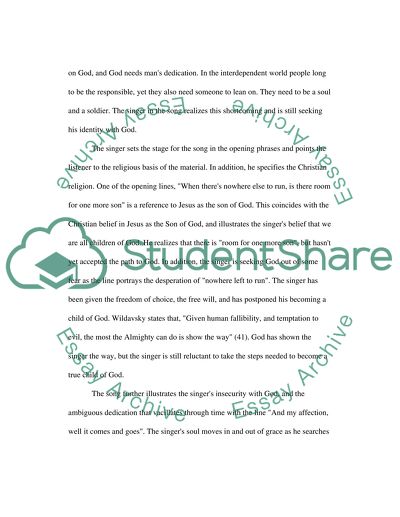 Download file to see previous pages In the eyes and realm of God everyone is but a child waiting to be rescued, yet asking to be a part of God's work. The song, 'All These Things That I've Done', is really told in the context of one of the last lines of the song that says, "I got soul, but I'm not a soldier". The singer is telling the listener that he is a part of God, and believes in God, but hasn't yet surrendered to him. The singer longs to reach the interdependent state of oneness with God, but has yet to take the leap of faith. This may be a simple fear of the unknown, or may be because he simply does not understand how to surrender. Still, the desire is there to be a part of God, and have God rescue him. It is like the lady that is overwhelmed by life and pleads, "Everybody seemed to be counting on me; depending on me. But I wanted to depend on somebody" (Warren). God is a two way street where man is dependent on God, and God needs man's dedication. In the interdependent world people long to be the responsible, yet they also need someone to lean on. They need to be a soul and a soldier. The singer in the song realizes this shortcoming and is still seeking his identity with God.
The singer sets the stage for the song in the opening phrases and points the listener to the religious basis of the material. In addition, he specifies the Christian religion. One of the opening lines, "When there's nowhere else to run, is there room for one more son" is a reference to Jesus as the son of God. This coincides with the Christian belief in Jesus as the Son of God, and illustrates the singer's belief that we are all children of God. He realizes that there is "room for one more son", but hasn't yet accepted the path to God. In addition, the singer is seeking God out of some fear as the line portrays the desperation of "nowhere left to run". The singer has been given the freedom of choice, the free will, and has postponed his becoming a child of God. Wildavsky states that, "Given human fallibility, and temptation to evil, the most the Almighty can do is show the way" (41). God has shown the singer the way, but the singer is still reluctant to take the steps needed to become a true child of God.
The song further illustrates the singer's insecurity with God, and the ambiguous dedication that vacillates through time with the line "And my affection, well it comes and goes". The singer's soul moves in and out of grace as he searches for his meaning of God, and searches for his individual identity with God. The use of the word "affection" is an important indicator of his love for God and his will to be a part of God, yet is still lukewarm to a total dedication to the cause. The insecurity and unsure nature of his convictions are further shown in the lyric, "You know, you know - no, you don't, you don't". The singer is a soul that is caught in the limbo between intellectual understanding and action. His tepid love for God comes and goes, as his trust in God as all-knowing is there one moment and vanishes the next.
The song's lack of trust in God may stem from the lack of trust in God's total knowledge and experience. The line "You know, you know - no, you don't, you don't', brings into question what it is that God does not know. On the one hand the singer contends, "I need direction to perfection", yet is unable to completely believe in God's perfection. Here again, the song exemplifies the ...Download file to see next pagesRead More
Share:
Tags
Cite this document
(“'All These Things That Ive Done' by The Killers Essay”, n.d.)
'All These Things That Ive Done' by The Killers Essay. Retrieved from https://studentshare.org/miscellaneous/1532241-all-these-things-that-ive-done-by-the-killers

“'All These Things That Ive Done' By The Killers Essay”, n.d. https://studentshare.org/miscellaneous/1532241-all-these-things-that-ive-done-by-the-killers.
Comments (0)
Click to create a comment or rate a document

Cultural relativism claims that each culture must have its own explanation in its own...
9 Pages(2250 words)Term Paper

There she changed his name to Theodore Robert Nelson. After marrying a man in the service named Johnnie Culpepper Bundy, Ted became Ted Bundy (Lohr, 2002). Schum (2006) explains:
Louise Cowell and Johnnie Bundy had four more children Ted was emotionally detached from his step-father. He generally preferred to be alone and had a strong inability to be social with other people. Shy, insecure, and uncomfortable Bundy was teased quite often.
Ted never created a bond with his mother. He must have seen that maternal bond with his younger four siblings. Ted must have been jealous. It would have been natural for Ted to feel that something was wrong with him. The thought of what's wrong with me? must have run through his head.

How Do All Kinds of Smoke Affect the Environment

We have succeeded in inventing the modern vehicles to be at ease while traveling, the modern machinery to help us complete our work accurately and speedily, built factories to increase production and still struggling to bring more changes in our lives. There are some negative impacts of these modern techniques and inventions. These negative impacts are not limited to social, economic and political aspects but they tend to expand towards the very existence of humanity. It is seen that all modern technologies like machinery and vehicles are emitting smoke which can be lethal for human beings. Not only the machinery and vehicles, but there are also other causes of smoke emissions.

Environment refers to all the things...
7 Pages(1750 words)Article

... stage in deciding about on what to finalize each matter. Everyone was giving decisions on their personal likes and interests and from the backgrounds they came from. To reach to a consensus decision was becoming very difficult and we all were having un-necessary arguments. The arguments jumped from one matter to another and it reached into other personal matters. All of us were getting offensive and losing our main focus of where the conflict had arises. When I read this book, I immediately recalled that event and how we could have controlled our arguments if we would have remained calm and realized that we are friends of each other and not enemies. Reflection The book “Why do you do the things you do” has a very interesting feel...
6 Pages(1500 words)Book Report/Review

...Topic: Chinua Achebe’s “Things fall apart” Number: Conflicts and conflict resolution- Chinua Achebe’s “Things fall apart” Human beings, unlike other primates, are biologically adapted for culture from birth due to their unique social cognition. From birth, children begin to interact with others in various activities such as gestural communication, gaze following and social referencing. Such skills usually engender cases of cultural learning that promote language acquisition, use of cultural tools, discourse skills and other activities, that ensure the culture maintains long life(Tomasello p.550) . Culture may mean a set of shared paradigms that reflect the values, attitudes and beliefs of a person, together with the tools and artifacts...
9 Pages(2250 words)Assignment

Drug Problems and Poverty in All Souls by Michael McDonald

Poverty is stressful and painful no matter what or who you are. In the novel, McDonald's discusses his code of silence in his community. Residents in South Boston refused to talk about the issue of poverty and other social problems like crime, violence, and drug abuse since they thought to talk of such issues would demean their status.

From his narration, the fact was that South Boston had increased poverty within the white society or community in the US. This happened in the 1960s before the problem of poverty in South Boston was addressed, and this meant that the poor people had to relocate. In addition, McDonald’s states that forced busing worsened the situation in that children were forced to places where peo...
8 Pages(2000 words)Essay

The Things They Carried: Jimmy Cross

... basic natural understanding of life (Werman, 2013). Also, it is not even important whether this is the death of a friend (though it is another story) or the death of an enemy- it brings reality back instantly. However, when people want to escape this reality they got into so brutally, they do all possible and impossible to do so. That is when it becomes clear how meaningful the things the soldiers agree to carry are to them. Surely, everyone in the story hides in the illusory word to avoid this enormous fear, grief, and sorrow he has to deal with. So everyone has got those things that help him personally to escape into better worlds: sex, religion, drugs, literature, and love after all. For instance, as stated in the story, “Until he...
8 Pages(2000 words)Book Report/Review

Peace may also suggest the existence of the healthy or newly healed international and interpersonal relationships, sincere attempts for reconciliation and prosperity in matters of economic or social welfare as well as working political order and establishment of equality that serves the real interests of all. Peace can only be achieved by ensuring that all cases of violence are critical. The paper will discuss the various things that can be in order for nations to live in peace.
The nature of conflicts has changed significantly in the past two decades. The state of conflicts has evolved from nations fighting each other to various forms of conflicts and violence that incorporate non-state actors such as organized crimes, gang...
6 Pages(1500 words)Case Study
sponsored ads
Save Your Time for More Important Things
Let us write or edit the essay on your topic "'All These Things That Ive Done' by The Killers" with a personal 20% discount.
GRAB THE BEST PAPER

Let us find you another Essay on topic 'All These Things That Ive Done' by The Killers for FREE!